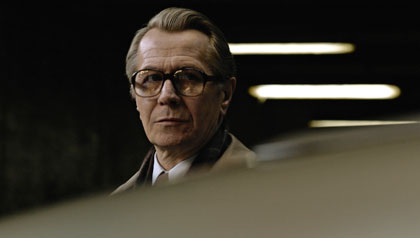 En español  |  When it came to dialogue in their new film, Tinker, Tailor, Soldier, Spy, for Gary Oldman and director Tomas Alfredson, less was more than enough.

Through the long silences and measured conversations Oldman keeps his character, spymaster George Smiley, under a tight, almost strangling rein. Smiley is, after all, a man of secrets — both professional and personal — and his ability to shield his innermost feelings from the outside world is for him not just a matter of preference, it's a necessary tool for survival.

See also: Quick review of Tinker, Tailor, Soldier, Spy along with Carnage and Another Happy Day.

But then, in one devastating moment, overcome with discoveries of disloyalty at home and on the job, Smiley cracks. His tears pour forth in a burst of sobs as heartbreaking as it is disorienting.

"That's Gary crying," says Oldman, explaining how he summoned that torrent of emotion. "You use memories and sensations. You draw on your own stuff you experienced of your life."

And that's why, he adds, "You can't play George Smiley at 25. But you can bring three decades of experience at 53."

Oldman and director Tomas Alfredson were here in Washington, D.C., promoting the opening of Tinker — and facing the inevitable questions comparing the new film with the classic seven-hour BBC miniseries in which Alec Guinness immortalized the character (If you want to compare the two, Acorn home entertainment has just released the whole thing on DVD).

"We weren't making the book," says Oldman. "You can't do it page for page — I mean, you can if you're doing a TV series — so Tomas would try and distill something down to an image that tells the story, and maybe two or three lines. "

These days movies and TV shows all seem bent on squeezing as many lines as possible into each scene — all the rapid-fire delivery of a 1930s screwball comedy with none of the wit attached.

In making a film about people for whom silence is the coin of the realm, Alfredson creates silences that are as meaningful as the dialogue that punctuates them. For him it is familiar territory — his breakthrough film, the 2008 adolescent vampire movie Let the Right One In, made breathless use of long, nerve-racking silences.

"If you surround a line with silence, that will mean much more than if there's a constant flow of sound," Alfredson says.

"In this case we had a story that was so complicated to digest, we needed time to both chew and digest the information. It's not just silence and no action — it's time for you, as an audience, to think."

The style requires an unusual amount of participation on the part of the viewer — as well as exquisitely calibrated levels of communication between actor and director.

"Tomas was the barometer of what was working," says Oldman. "Was I doing too much? Was it too subtle?" He turns to the director. "Did you ever say to me, 'You're doing too much?'"

Alfredson smiles faintly, thinks a bit, and answers, "No."

And the two of them laugh.