Renowned director Roman Polanski places an elite quartet of actors — Jodie Foster, John C. Reilly, Kate Winslet and Christoph Waltz — in a Brooklyn living room to explore how two sets of parents — one of a bullied child, the other of the bullier— attempt to work out their differences. But moviegoers get more than they bargained for (or perhaps Polanski should have paid them for coming) when Winslet throws up on the coffee table that separates them 20 minutes into this 80-minute film.
— Meg Grant

En español  |  The construct for first-time director Sam Levinson’s Another Happy Day is familiar: A dysfunctional family gathers for a wedding, and old and new resentments collide. Levinson, son of Barry (who won an Oscar for directing Rain Man), has assembled a stellar cast led by the underrated Ellen Barkin (who is a producer on the film and reported to be living with the much younger Sam Levinson).

He brings a freshness to the story by exploring the interrelations of three generations and exposing their pathologies: adolescent addiction, self-mutilation, spousal abuse and suicidal ideation related to terminal illness. The weakness here is that Levinson plumbs his subjects’ neuroses in such an utterly dark way that his characters sometimes come off as caricatures, and the actors’ performances as farcical.

We meet middle-aged Lynn (Barkin) as she drives with her two younger sons from her second marriage — Elliott (played by the very talented Ezra Miller of City Island) and Ben (Daniel Yelsky) — to the wedding of her older son from her first marriage, Dylan (Michael Nardelli). She is running on a short fuse, angst-ridden about meeting up with her ex, Paul (Thomas Haden Church), with whom Dylan has lived since their divorce. And she’s even more concerned about how her daughter, Alice (the delicate, lovely Kate Bosworth), who remained in her custody, will deal with seeing the father she hasn’t spoken to in years. Trouble enough, but Elliott’s been in and out of rehab multiple times, Alice is a cutter, Paul is an arrogant SOB with a trophy second wife (Demi Moore) and Lynn’s second husband (Jeffrey DuMunn), who arrives separately with Alice, is so out of touch as to be seemingly brain-dead. 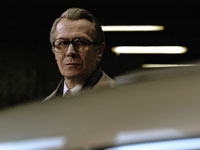 Yet there’s more. The wedding is being held at the Annapolis home of Lynn’s parents, where Lynn’s always unsupportive sisters (overplayed by Siobhan Fallon and Diane Scarwid) have gathered to drink, giggle and gossip about anyone who’s not in the room — especially Lynn. As for Lynn’s parents, her dad (George Kennedy) is suffering from heart failure, and her mom Doris (spot-on Ellen Burstyn) is as shut-down as ever, dismissing Lynn’s questions about why she didn’t help her when Paul was abusing her as so much nonsense, while simultaneously going to great lengths to ingratiate herself to him.

Lacing humor into a family drama of this sort is tricky business, and Levinson is too young, or too new at this, to do it subtly. A perfect example is when Lynn, deep in discussion with Ben about what his ADD diagnosis means, asks him out of the blue whether he washed his hands after using the bathroom earlier. Ick!  And while there are far too many scenes in Another Happy Day in which Barkin’s on-the-verge-of-tears expression fills the camera, her already-hoarse voice breaking, when Lynn collapses on the grass outside her parents’ home, sobbing, you remember what a terrific actress Barkin is, and how deserving she would be of an Oscar nomination for this role. Similarly powerful are scenes of Elliott, in a narcotic stupor after sucking on a Fentanyl patch he’s stolen from his grandfather, and Alice, her sliced body exposed when her grandmother walks in while she’s changing.

Another Happy Day offers up much food for thought about how family members too often annihilate one another when they could so conversely serve as each other’s anchors. It’s just unfortunate that Levinson has made it such a burdensome task to glean salvation from all the wreckage.