According to recent news reports, the two grown children of the subject of the new biopic Lovelace were "grateful" for the making of the film, as it reveals to the world a side of their mother many wouldn't otherwise have known.

Their storytelling approach along with some brilliant casting, including Amanda Seyfried (recently terrific as Cosette in Les Miserables) as the vulnerable and dominated Lovelace/Boreman, make this small film a surprisingly compelling drama. 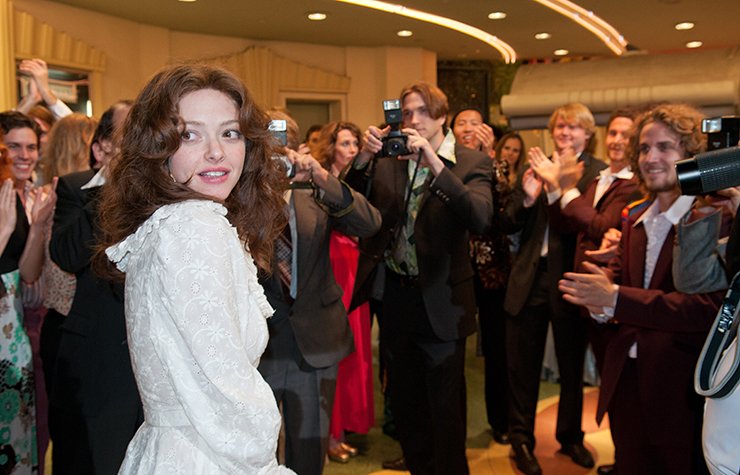 We meet Boreman as she and a girlfriend catch rays and smoke cigarettes in the backyard of her suburban central Florida home, where Boreman's parents have relocated after their wayward teenage daughter has given birth to a child, then offered it up for adoption.

Boreman's mother is a stern, world-weary, working-class broad played by Sharon Stone, who disappears into the role (more about Stone in the box below), and her father (the prolific character actor Robert Patrick) is a checked-out former cop who passes the time in front of the TV with a highball in hand.

Enter Chuck Traynor, a charismatic head-turner whom Boreman meets at the roller rink. She quickly falls for him, despite his heavy drug use, and before you know it the pair are married.

It's a dangerous place to be, but Boreman doesn't know any better than to go along with the making of her Linda Lovelace alter ego and the filming of Deep Throat. (She was paid $1,250; it went on to gross well over $100 million.)

Truth is, Boreman didn't just go along. Epstein and Friedman show in flashback what the woman endured behind closed doors with the increasingly maniacal Traynor, who controlled her money, beat her, forced her into prostitution and held her hostage.

In one especially chilling scene, Boreman reaches out for help to her mother, who responds coldly that Boreman needs to lie in the bed she made.

In the months and years after, she wrote a book about her ordeal, became an outspoken antiporn crusader, married a cable installer-turned-contractor and had two children. She died at age 53 after being critically injured in a car accident.

Lovelace might have been a better movie if the filmmakers had looked more closely at her later life. Perhaps it's enough, however, that they busted a myth, one many of us grew up with.

Meg Grant is West Coast Editor for AARP The Magazine. Sharon Stone, off-screen and on (in "Lovelace").

An actress known for her turn as one of the big screen's most seductive femmes fatales, Sharon Stone says she is happy, finally, to be playing a mom.

In Lovelace, Stone portrays Dorothy Boreman, the strict and severe mother of Linda Boreman, aka Linda Lovelace (Amanda Seyfried), star of the 1972 adult film Deep Throat, who went on to become an antipornography crusader.

"The script was about this particular woman," says Stone, 55, "but it was also about a dysfunctional family and how Lovelace broke that cycle [of dysfunction]. The woman that I play was a fulcrum pin in the story."

Stone could relate to Dorothy Boreman's tough way of dealing with her daughter even when she was crying out for help. "Remember all those things that they used to say when you were little?" she asks. " 'You gonna lay down with dogs, you're gonna get up with fleas.' "

The striking actress is virtually unrecognizable as Boreman, wearing a mousy brown wig and thick glasses. "One reviewer didn't even know who I was until the credits rolled," says Stone. "It was the greatest review I've had because it was just about the work. So much of my career has been people not being able to get past my physicality. Now, perhaps, they'll be able to look back at the work for the work's sake."

Her favorite role these days, though, is the one she plays at home as mom to three sons, Roan, 13, Laird, 8, and Quinn, 7. "They're cute as buttons and just hilarious," Stone says. "I'm getting movie [roles], but I really want to do a TV sitcom so I can stop traveling and just be home with my kids. They're at sensational ages." -— Meg Grant