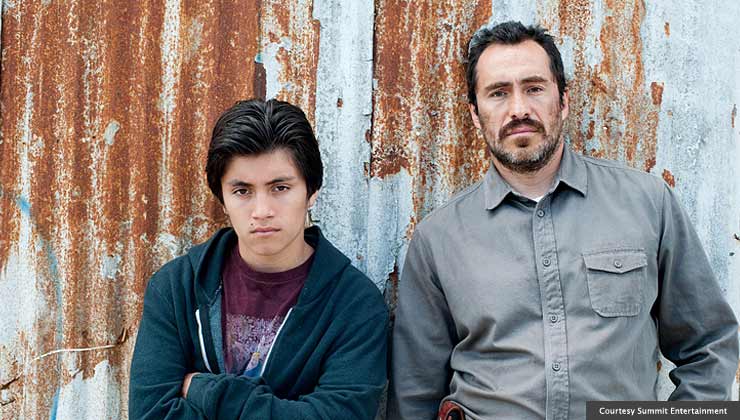 En español | Think of the powerful and moving film A Better Life, opening June 24, as a Bicycle Thieves for the 21st century.

In the 1948 Italian neo-realist classic Bicycle Thieves, a thief steals a poor workingman’s bicycle, essential to his job posting Rita Hayworth signs around town. As the man and his son set off to track down his only means of transportation, the film becomes a tragic meditation on poverty and the desperation of people at the margins of society.

In A Better Life, the protagonist is an undocumented Mexican gardener in Los Angeles, Carlos Galindo (played with magnificent dignified understatement by Demián Bichir), whose truck is stolen. Unable to report the theft to the police (they might discover his immigration status and deport him), Galindo sets off through the mean streets of East L.A. to find the key to his livelihood.

“[Undocumented workers] are in the United States to make their lives better and happier,” says Bichir, a major star in his native Mexico, who has also appeared in the movie Che and the TV series Weeds. “These people are proud of the country they are living in.”

But this hardworking gardener has problems that go beyond the vehicular. He’s a single parent (his wife has walked out on him) with a teenage son, Luis (newcomer José Julián), who is attracted to the gangbanger world and has little respect for the down and dirty work papi is doing to make a better life for his child.

Generational conflicts are nothing new. Yet director Chris Weitz’s film refuses to wallow in sentimentality or cliché. Instead, he paints a sobering portrait of one divided family that makes for a short course on the immigration debate. Galindo has been in the United States for years, but because he snuck into the country, he is caught in a jurisdictional shadow world. He is honest, dedicated, industrious — and illegal. But Galindo’s son was born here, making him a U.S. citizen. So the boy, with no ties to his father’s homeland, cannot fathom his dad’s up-by-the-bootstraps immigrant mentality.

How all this works out onscreen is what makes the film something special. In a heartbreaking scene, he explains to Luis the fatherly love that, for years before he bought the vehicle, drove him to get up every morning and stand on street corners hoping for a low-wage work as a day laborer. If he’s sent back to “the other side,” what will happen to his child?

By the end of A Better Life, that question is resolved, but it’s not a resolution that guarantees closure. And that, after all, may be the film’s greatest success. By giving a human face to a contentious dialogue, it forces us to ask ourselves questions about compassion and empathy for society’s underdogs. Is Carlos Galindo unworthy of our respect? Or is he the kind of person whose hard work makes the United States stronger? It’s not hard to figure out what side of the issue this haunting and beautiful film comes down on.