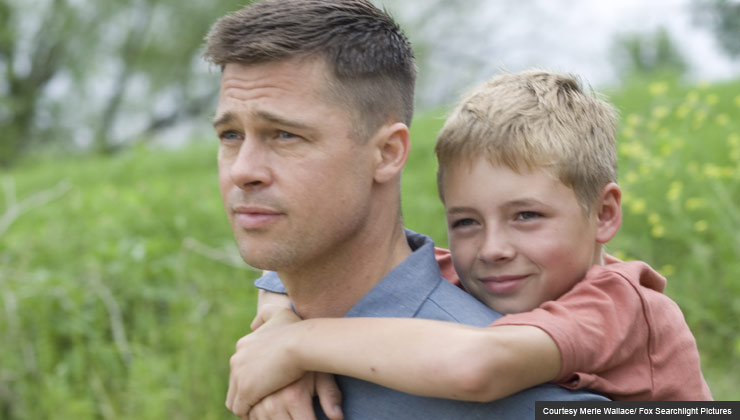 Brad Pitt and Laramie Eppler star in The Tree of Life.

En español  |  The celebrated director Terrence Malick, sometimes referred to as the J.D. Salinger of the film world for his reclusiveness, is notorious for over-thinking and relentlessly editing his films. At 67, his body of work as a director  includes just five movies, and his most recent, The Tree of Life, comes out six years after his previous one, The New World.  Perhaps he should have taken less time. An art film to the nth degree, The Tree of Life is bound to incite impatience in moviegoers as early as 30 minutes into its two-hours-and-20-minute duration. Sadder still is that those who sit through its entirety will not be rewarded by discovering the point Malick is trying to make. I’m not sure there is a point.

In the first quarter of the film we meet the O’Brien family, an archetypal, circa-1950s Middle-American unit headed by an overly stern and explosive father (Brad Pitt) and an idealized passive mother (Jessica Chastain, looking much too young for the role).

The couple’s three young boys are played by kids from Waco, Texas — where the film was shot — who had no previous acting experience. In slow, drawn-out scenes, we see the group seeming to interact: playing ball, swinging, sitting around a kitchen table. “See” is the operative word here. The entire film explodes visually; director of photography Emmanuel Lubezki has been nominated for four Academy Awards. But there is little to no dialogue offered by the characters — Mrs. O’Brien barely speaks, which infuriated me, as it seemed to reinforce the stereotype that women should be silent. Instead, Malick has his players whisper voiceovers from time to time — “Did you know?” “What am I to you?” — that serve only to further bewilder viewers. It’s never quite clear who’s speaking, or to whom. The lack of dialogue prohibits any authentic interaction between, or development of, the characters, and, hence, the audience is unable to be moved by the supposed unfolding drama.

We learn from inference that one of the younger O’Brien boys dies (we never know how) in his late teens. And we understand that the oldest boy (his all-grown-up version is played by Sean Penn, who appears in no more than 10 minutes of the film) goes on to occupy some unhappy modern-day businessman existence. Toward the end of The Tree of Life, the family comes together in a hazy beach seen meant — I think — to represent heaven.

And that’s as much of a plot as can be deciphered.

Slashed in between images of this stick-figure family are sci-fi scenes of the big bang, tectonic plates shifting, oceans colliding, stars exploding. For a solid 15 minutes early in the film, we watch as Malick unfolds his version of the beginning of time to an orchestral score by the French composer Alexandre Desplat. Not a word uttered, not a human to be seen (though we do witness some kind of interplay between two dinosaurs). Amoebae morph into jellyfish, and suddenly we’re in the entryway of a Texas home as Mrs. O’Brien cries out to God after learning of the loss of her son.

The Tree of Life premiered earlier this month at the Cannes Film Festival, and the audience was split: Half cheered, half jeered. Though the film won the festival’s Palme d’Or, it’s unlikely to sweep the awards season on this side of the Atlantic.

When I was in college studying writing, I authored a pretentious, wordy, condescending piece about suicide, which I self-indulgently titled “Soliloquy of a Stranger.” At the time I thought it to be a masterpiece. It was years later before I realized how right-on my teacher was in his simple stinging comment: “Want to be as powerful as a razor blade? Tell a story.” A filmmaker can be an artist. A filmmaker can inspire — make you think. But first and foremost, filmmaking is about storytelling, something Malick deprives us of in The Tree of Life.