En español  |  For Hollywood studios, summer movie season is huge — 40 percent of the year’s box office receipts come in during the warm months. And no one in film history has deliverd the summer movie goods better than Harrison Ford. All told, the actor's summer movies (for the purposes of this list, films released between May and August) have reeled in more than $3 billion at the U.S. box office. 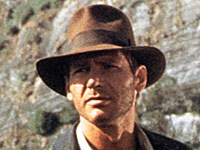 Indiana Jones is just one of Harrison Ford's roster of iconic movie characters.

From the late 1970s to the late 1990s, in fact, a Harrison Ford summer hit was as predictable as fireworks on the Fourth of July. Though the dawn of the new millennium brought a temporary drop in his summertime star power, lately he's come roaring back — 2008's Indiana Jones and the Kingdom of the Crystal Skull ranks as his highest-grossing movie ever, bringing in $317 million at the U.S. box office. And this July, he returns to his favorite season with a featured role in Jon Favreau's Cowboys & Aliens. Had another actor agreed to take part in the sci-fi/western mashup, the idea might sound positively wacky. With Ford, it sounds more like a sure thing (actually, it still sounds wacky — but cool wacky).

Unlike some summer hits — brainless confections that disappear from the memory as soon as the credits roll — Ford's films more often than not match their box office receipts with quality. Five of the movies on this list garnered Oscar nominations for Best Picture, and when the American Film Institute ranked the top 50 movie heroes of all time in 2003, two of Ford's characters were near the top of the list: Han Solo at No. 14, and Indiana Jones at No. 2. 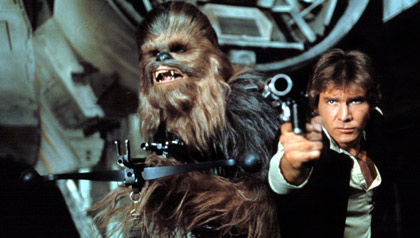 Ford’s casting as cocky Millennium Falcon pilot Han Solo in the most successful movie franchise of all time is the stuff of Hollywood legend. By the mid-1970s, he had all but given up on an acting career and was relying on his carpentry skills to make a living in Los Angeles. One of his jobs was to build a portico at Francis Ford Coppola’s office, where George Lucas was holding auditions for Star Wars. Lucas and Coppola asked Ford to stand in and read lines with the actors trying out for various roles— and the director soon realized that his perfect Han Solo was the guy with the hammer. 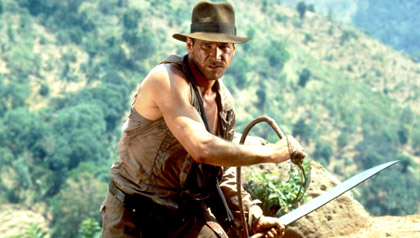 What began as a fairly simple idea drawn up by George Lucas and Steven Spielberg — to reinvent the adventure serials of their youth for a modern audience — blossomed into one of Hollywood’s most lucrative and beloved franchises of all time The first three films were huge hits in the 1980s. Then, after a nearly 20 year hiatus, the series roared back to life three years ago with Kingdom of the Crystal Skull. Though some hardcore fans weren’t happy with the movie, it became the most financially successful film in the series. A fifth movie is reportedly now in the works.

It’s hard to imagine the movies being as popular without Ford, but the actor’s iconic characterization of the daring archaeologist almost didn’t happen: Originally, director Spielberg offered the Indy role to Tom Selleck, who had to demur because of his TV commitments to “Magnum, P.I.” What did Selleck miss out on? “Fortune and glory, kid,” as Indy says in Temple of Doom. “Fortune and glory.” 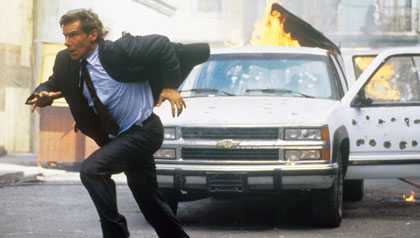 Harrison Ford as Jack Ryan in Clear and Present Danger.

Though Ford is probably the actor most closely associated with Jack Ryan, he’s only one of three actors to play author Tom Clancy’s durable Cold War hero. Alec Baldwin originated the role in 1989’s The Hunt for Red October , but when Baldwin opted out of a sequel, Ford stepped in for 1992’s Patriot Games. Two years later, he reprised Ryan in Clear and Present Danger, which still ranks as the most successful of the now-dormant Ryan franchise, bringing in a hefty $122.2 million in the U.S. The third actor to slip into the CIA agent’s suit? Ben Affleck, in 2002’s The Sum of all Fears. 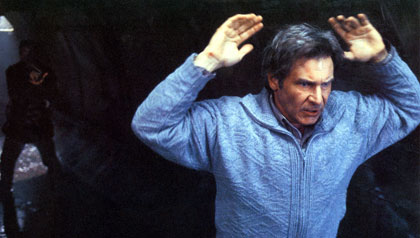 Harrison Ford as Dr. Richard Kimble in The Fugitive.

The Star Wars and Indiana Jones franchises were hugely popular, but The Fugitive is probably the summer hit that cemented Ford’s place as the king of the blockbuster season. After all, this was a remake of the old TV series that appeared in theaters with low expectations in August — at the time, a traditionally slower movie-going month —and then blossomed into a smash. Ford gave accused murderer Dr. Richard Kimble a relentless urgency as he scoured Chicagoland hunting a one-armed killer, and Tommy Lee Jones matched him as Deputy Gerard, the U.S. marshal on his trail.

The Fugitive earned seven Oscar nominations, including Best Picture, and won Jones an Academy Award as Best Supporting Actor. Ford had to settle for sharing that year’s MTV Award for Best On-Screen Duo with Jones.

Next: A President in peril. >> 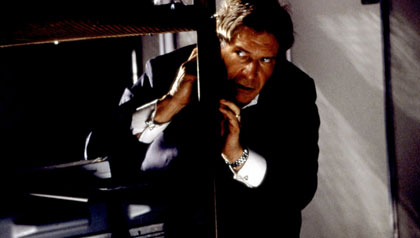 Harrison Ford as President James Marshall in Air Force One.

After navigating a distant galaxy in the Star Wars movies and globetrotting from adventure to adventure as Indiana Jones, Ford pulled off a feat of cinematic claustrophobia in this action hit set almost entirely aboard Air Force One. As President James Marshall, who singlehandedly battles a group of Russian hijackers, Ford and the movie wrapped itself in the flag and brandished a decidedly pre-9/11 brand of bravado. 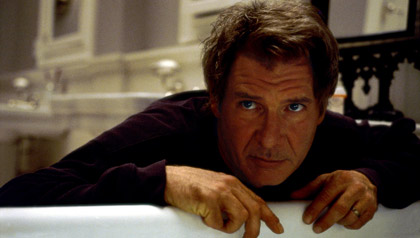 Harrison Ford in What Lies Beneath.

The goodwill built up between Ford and movie audiences paid off nicely when the actor went against type in this suspenseful supernatural thriller. Ford plays a scientist whose past comes back to haunt him (and his wife, played by Michelle Pfeiffer). Director Robert Zemeckis (no summer movie slouch himself, with blockbusters like Back to the Future, Who Framed Roger Rabbit, and Forrest Gump on his résumé) knew just how to use Ford’s laid-back persona to lull his audience to sleep — and then scare the bejeezus out of them.

Next: An American classic. >> 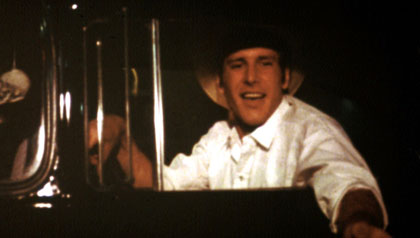 It’s hard to give Ford too much credit for the runaway success of this coming-of-age teen romp — after all, he had what amounts to a bit part as cocky street racer Bob Falfa. But the movie established a personal relationship between Ford and director George Lucas that would pay off quite nicely for both a few years later when they teamed for Star Wars and, later, Raiders of the Lost Ark. 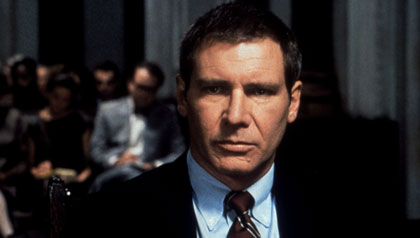 An adult-themed murder mystery with no special effects and a story that demands an audience actually pay attention? Opening in the crowded summer season? Put Ford in it, and your worries are over. The actor’s stoicism made him the perfect choice to play Assistant D.A. Rusty Sabich, accused of killing a co-worker (Greta Scacchi) with whom he was having an affair. The movie required a performance that keeps its audience guessing until the final moments, and Ford delivered. 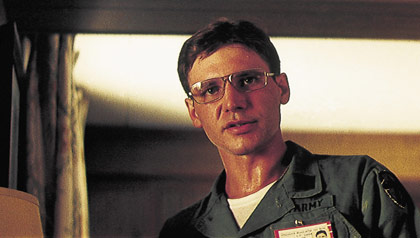 Ford’s role in Francis Ford Coppola’s Vietnam War epic is small but important: As Army intelligence officer Colonel Lucas, he’s the one who orders Captain Willard (Martin Sheen) on the harrowing journey up the river to track down the maniacal Colonel Kurtz (Marlon Brando). Taking such a minor role in the wake of his Star Wars success might seem an odd choice, but it was probably another sign of an actor willing to stretch his range. The setting and story couldn’t have been further removed from all those Jedi Knights and Wookiees.

Next: Testing his romantic comedy chops. >> 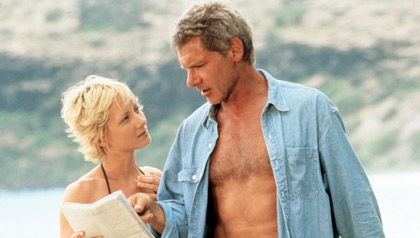 By the summer of 1998, Ford’s summertime star power had dimmed — but he was still a big enough draw to pretty much singlehandedly push this rom-com/adventure flick to a respectable take at the box office. Ford played a middle-aged pilot who crash lands his small plane on a deserted island while ferrying an annoying magazine journalist (Anne Heche) to an assignment.

The pieces seemed to be in place for a big winner: in addition to the reliable Ford, Heche was a hot commodity at the time and director Ivan Reitman has helmed some of the most successful comedies ever. Alas, though the movie was a financial success, the crash landing was an apt metaphor for its general reception among critics and audiences.