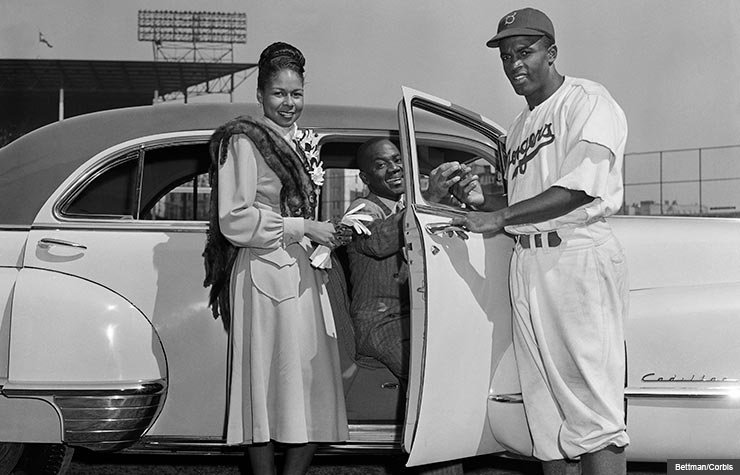 1947: Rachel and Jackie Robinson (with entertainer Bill "Bojangles" Robinson) accept the keys to a Cadillac given to them by appreciative fans.

If your job can make you ill, then Jackie Robinson earned plenty of sick days in the spring of 1947, when he donned number 42 with the Brooklyn Dodgers as the first African American player of Major League Baseball's modern era.

See also: Reviews and trailers at Movies for Grownups on YouTube

Actor Chadwick Boseman plays the legendary ballplayer in 42: The Jackie Robinson Story, a new movie about that landmark year. (See a film trailer at the bottom of this page.)

In an interview with AARP, Robinson's widow, Rachel — who's tried to get a film made about Jackie since Sidney Poitier was young enough to play him — described how her husband dealt with the mental and emotional pressures of racism. (See the box below to listen to an audio clip.) 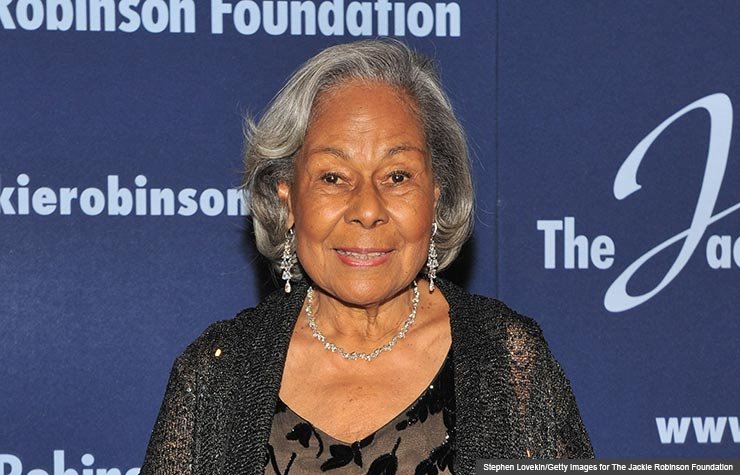 Rachel Robinson shares how her husband, Jackie Robinson, dealt with his anger over baseball's racism. (Listen by clicking the arrow above.)

"He could never show his anger in public," recalls Rachel, now 90. "Jack and I would come back from home games together in the car, and if he said, 'I'll be home a little later,' I knew that he was very angry. He would go to the nearest golf driving range and hit balls. After he hit a couple of buckets of balls, he was ready to come home."

The turmoil on the field never threatened their 26-year marriage, Rachel says. "We pledged to each other to make our home a haven. We wouldn't attack each other, because we were being attacked from the outside. It drew us closer together."

Jackie Robinson died in October 1972 from heart problems and diabetes complications. He and Rachel had three children. A few months before his death, the Dodgers retired his uniform number.