Weddings are fertile narrative devices for filmmakers who want to bring characters together in both confluence and conflict, but so many such movies of late have been structured around a big matrimonial event that you'd think audiences would be bored by now.

I certainly was prepared to be less than enthused by The Big Wedding, a star-packed comedy by writer-director Justin Zackham, who scripted the terrific film The Bucket List.

It hardly hurt that Zackham was working with an A-list cast on this, and he manages to draw out some hilarious, spot-on performances. He also peppers the story with enough fun, unpredictable moments to make the viewing experience a lot like being at a wild and crazy party.

Mind you, the premise of The Big Wedding is a little far-fetched: Alejandro (Ben Barnes of The Chronicles of Narnia), the adopted son of long-divorced couple Don (Robert DeNiro) and Ellie (Diane Keaton) Griffin, is getting married. The wedding will take place at Don's gorgeous lakeside home, where he lives with his long-time girlfriend Bebe (Susan Sarandon, who's exceptionally good in this role).

Alejandro's birth mother, Madonna (Patricia Rae of Maria Full of Grace), who has never been to America, is traveling in from Colombia for the festivities. 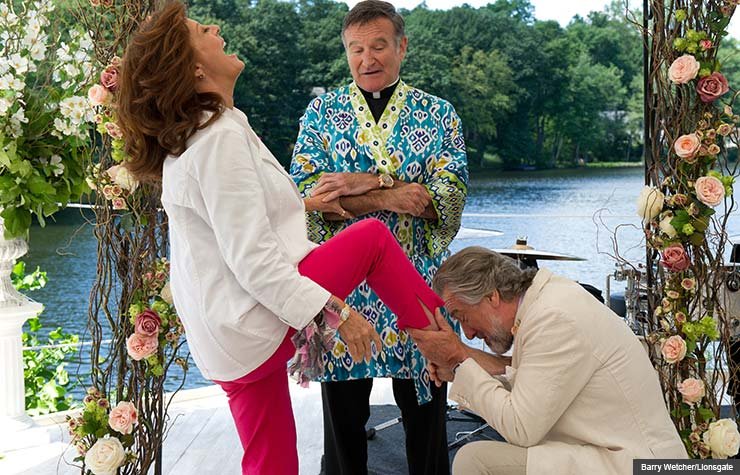 Madonna is a conservative Catholic who doesn't believe in divorce and who isn't aware that Don and Ellie are no longer together, so Alejandro insists that his parents pretend to remain happily married for the duration of her visit.

Bebe, who once was Ellie's best friend, somewhat reluctantly agrees to go along with the charade, setting off a series of awkwardly funny situations over the course of the wedding weekend.

Full of multigenerational subplots, the film consistently entertains. The Griffins' two other elder children, the married attorney Lyla (played by Katherine Heigl, who is not at her best here) and the still-a-virgin bachelor Jared (Topher Grace of Spider-Man 3), watch their parents' shenanigans with dry humor and disdain, especially on the part of Lyla, who's never forgiven her father for divorcing her mom.

Meanwhile, Madonna's grown daughter Nuria (played by newcomer Ana Ayora) is as sexually liberated as her mother is religiously devout, and she has the hots for Jared.

Alejandro's fiancé Missy (Amanda Seyfried, who was terrific playing Cosette in last year's Les Miserables) hopes to cheerfully make it through the ceremony, but her wanna-be-rich parents, Barry (David Rasche of Men in Black 3) and Muffin (Christine Ebersole), keep interjecting themselves in the chaos, which is presided over by the neighborhood priest, Father Moinighan (the always hilarious Robin Williams).

Zackham manages to create pleasant surprise after surprise from some oft-used elements, including slapstick comedy. In the end, his zany family portrait emerges as deft and nuanced, as we recognize these people and know, from our own experience, that what you see on the outside is rarely what resides inside.