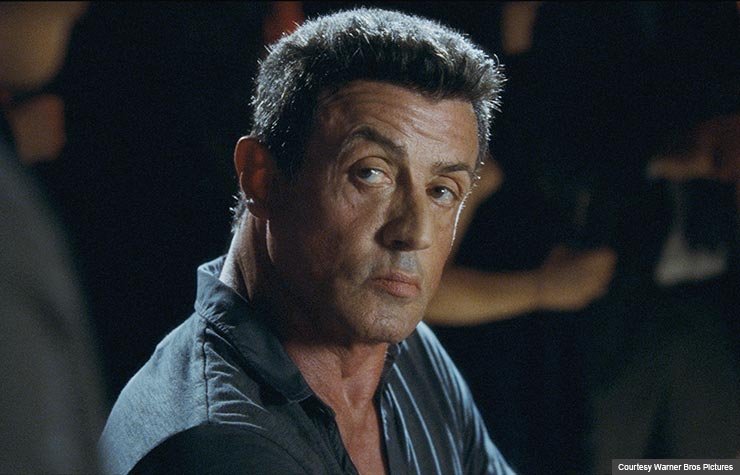 Few actors walk as well as Sylvester Stallone. The guy has this slo-mo swagger, one shoulder leading the other, fists clenched, the elevation of his head maintained to the millimeter. His neck, a tree trunk with a head carved at its top, juts from oak desk shoulders. And those arms. Guns is not the right word. Bazookas, maybe. With great, bulging veins that cling to them like big fat leeches.

At 66, Stallone is in full flower in Bullet to the Head, the bloody tale of James Bonomo, a hit man out to avenge the death of his partner. As Bonomo, Stallone's dead eyes are betrayed only occasionally by glimmers of humanity: when he spares a would-be victim who happens to be in the wrong place at the wrong time, or when he takes vengeance upon a particularly bad bad guy.

Summer 2013 has plenty of Movies for Grownups

This year's dead of winter brings us a triumvirate of action films starring actors for whom age 50 is a rapidly receding milestone. Arnold Schwarzenegger acquitted himself well a couple of weeks ago in The Last Stand (although moviegoers stayed away); a few weeks hence, Bruce Willis will return to his most lucrative franchise in A Good Day to Die Hard. Tucked between them is Sly's adventure, and for fans of the genre there is absolutely no reason to avoid it. The pedigree of Bullet to the Head is impressive: It's directed by Walter Hill, who helped define the modern buddy cop flick with 48 Hrs. It's written by Alessandro Camon, who was Oscar-nominated for his minutely observed 2009 drama The Messenger.

Everyone is in top form. That's not to say the recent action film mania for head-spinning camera movement, gimmicky freeze-frames and over-the-top explosions of gore don't get in the way. But with Stallone as its center of gravity, Bullet to the Head delivers exactly what it proposes to, and you can't ask for more than that.

A footnote about product placements in movies: I knew we were in trouble way back when Stanley Kubrick slapped a Pan Am logo on his space shuttle in 2001: A Space Odyssey, but even I was taken aback by the repeated plugs for BlackBerry smartphones in Bullet to the Head. As the D.C. cop who tails along with Stallone on his quest for revenge, Sung Kang keeps pulling his 'Berry from his pocket, waving its glowing face around and ceremoniously summoning up vital information at a moment's notice. The camera lovingly catches the phone's metallic logo glinting in streetlights, and we're even treated to one shot — 25 feet high in my theater — of the BlackBerry screen. At any moment, I expected the actor to turn to the camera and beam, "Seriously — I LOVE my BlackBerry!" Then again, a BlackBerry, like Sly Stallone in Bullet to the Head, is all business.