En español | It's Black History Month, so find a spot on the sofa, grab the DVD remote and settle in for a cinematic ride through African American history.

The AARP Bulletin asked film historian Donald Bogle to share his list of eight movies that depict the African American experience at pivotal stages in our nation's past. In addition to teaching film at New York University and the University of Pennsylvania, Bogle is the prize-winning author of several books, including Dorothy Dandridge: A Biography and Toms, Coons, Mulattoes, Mammies & Bucks: An Interpretive History of Blacks in American Films. His latest is Heat Wave: The Life and Career of Ethel Waters. 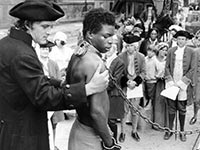 The slave drama took a lot of people by surprise when it first aired as a television miniseries based on the Alex Haley novel. "People were curious about it," Bogle says. "The other thing that was a great hook for it, in terms of bringing in viewers of all ages, was its young protagonist, Kunta Kinte, played by LeVar Burton. The younger audience could identify with him." Other notable actors in the story that followed several generations of a black family during slavery are John Amos, Lou Gossett Jr., Madge Sinclair, Leslie Uggams and Ben Vereen. "You had these exceptional performances and all of America was watching." 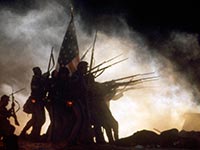 A scene from "Glory."

Glory is about a group of African American soldiers in the Civil War. "We look at these men from the 54th Regiment of the Massachusetts Volunteer Infantry and we see that they are heroic," Bogle says. "We see they, too, are making sacrifices and that they want their country to be a united country, and also free of racism." You get a sense of who these men are. "We hear them talk about experiences they had before they volunteered, but none of it's dramatized," which unfortunately is missing from the film. Morgan Freeman and Andre Braugher offer strong performances, and Denzel Washington won his first Oscar for his role as the fugitive slave Trip. "His performance alone makes this movie worth seeing." 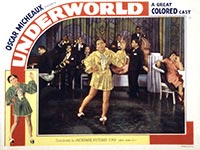 Poster from the movie "Underworld."

"This gangster film, directed by Oscar Micheaux, is one of my guilty pleasures," Bogle says. "It is in many ways a mangled film; there are problems with the sound. But it's also very interesting." The film opens at a Negro college in the South, and the hero, a talented young man (played by Sol Johnson), goes north to Chicago to seek his fortune. But what he gets is a world of congestion, crime, violence and people with a whole other sort set of moral values and ethics. "The thing you notice about Micheaux is he always had noble black characters," Bogle says. "They are the ones who hold on to these higher standards. They're the ones you can see as our leaders of tomorrow." 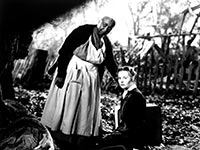 In this film, which shows how African Americans had to live and function under Jim Crow segregation laws, the title character is a light-skinned black woman who returns home to the South after having lived as a free woman in the North. Ethel Waters earned an Oscar nomination for playing her hard-working grandmother, a woman who has lived in the South, and understands and accepts its rules. "The movie is about Pinky dealing with the racial bigotry that existed in the South and also coming to a deeper consciousness of who she is as an African American woman," Bogle says. He points out that one of the compromises of the film, directed by Elia Kazan, is that Jeanne Crain, a white actress, portrayed Pinky. "It was a well-written character and a black actress would have brought something else, but nonetheless I think Pinky is a movie audiences can benefit from." 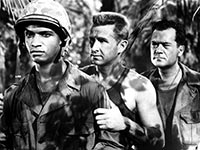 James Edwards, Lloyd Bridges and Frank Lovejoy in "Home of the Brave."

"What happens after the Second World War is the movie audience has changed; they're less naive, less innocent, and we start to see movies that deal with problems within American society," Bogle says. One of those movies is Home of the Brave, which follows a black World War II soldier, played by James Edwards, who returns from a special mission suffering from severe psychological trauma. "Edwards' character ends up in a mental ward, where the Army puts him through a series of psychiatric sessions to find out what's wrong. They dig into who he is and what he's experienced in life and, in a flashback, we learn that he's had to deal with racism from the time he was young." Although the movie was released prior to the civil rights movement, "it suggests to us that in America black and white are going to have to come together, and it's on white America to now examine itself and be prepared for a new day." 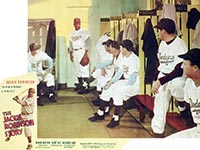 Bogle says this low-budget film, in which baseball great Jackie Robinson played himself, was made with an African American audience in mind. It follows him from the time he's a multisport star athlete at UCLA to his major league debut in 1947, when he broke baseball's color line. "The interesting thing is Robinson was not a trained actor. But in looking at it today, it's nice to see him on screen with a young Ruby Dee as his wife, Louise Beavers as his mother and Joel Fluellen as his older brother." Branch Rickey, the man responsible for bringing Robinson to the Dodgers, understood that Robinson had what it took to make it on the baseball diamond, "not only by stealing bases and hitting, but being able to deal with the crowds and their attitudes," Bogle says. (Editor's Note: An updated version of Robinson's story, starring Chadwick Boseman as Robinson and Harrison Ford as Branch Rickey, is due out in 2013. The title, 42, was the number on Robinson's uniform. To honor Robinson, no other baseball player can ever wear that number.) 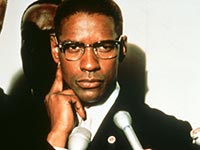 "Malcolm X was very much a labor of love for [filmmaker] Spike Lee," and it shows the forces that shaped the black nationalist leader, portrayed by Denzel Washington, and the forces that led to his destruction, Bogle says. "The movie goes into Malcolm's background — his childhood in Nebraska, where the Klan burned down his home, his years as a street hustler, his political awakening in prison — and then his ability to connect to the masses as a spokesman for the Nation of Islam." 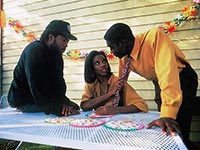 Filmmaker John Singleton’s debut feature, which was nominated for two Academy Awards, still works today, Bogle says. “It’s a coming-of-age story, set on the mean streets of Los Angeles, that focuses on a boy who’s sent to live with his father; the idea being that his father can instill in him certain principles that will lead him on to manhood,” he says. “So it’s really about the responsibility of black fathers as well as individuals within the African American community. … I’m surprised I’m still moved by it.”