There are six eye symptoms you should never ignore. Find out about them in the AARP Eye Center.

Since turning 55, I've come to view the lines on my face and neck the same way I think of the weeds in my garden: an annoyance best discouraged with diligent maintenance. Twice a day I lather with a $47 "age-defying" collagen cream. Last year a couple of rounds of Botox injections smoothed the crease between my eyebrows — but now it's back, and if I had an extra $25,000 I might go all the way and have a face-lift. 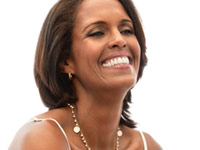 Not everyone is seeking the fountain of youth: Check out our slideshow featuring people in their 50s, 60s, 70s and 80s, who are comfortable with who they are and how they look.

But that's me, a member of the American demographic that sociologists say feels the most pressure to look younger: unmarried, post-50 women. I'm also part of another pressured group: professionals seeking job promotions. I worry that the older I appear, the more likely my 30-something friends are to lose interest in me, that employers might not hire me, that men will no longer find me attractive. The pressure further mounts thanks to where I live — image-obsessed Los Angeles — where "stars" like Kim Kardashian are idolized. On the Westside there seem to be more plastic surgeons per square mile than dentists.

Even outside L.A., few are immune to our society's obsession with youthful appearance, though how we deal with that varies from the rational — "I can't stop aging, so why worry?" — to the ridiculous. No offense to Angelina Jolie, but her bee-stung lips (which are purportedly natural) fueled a now passé plastic surgery craze that frequently produced profiles akin to Donald Duck's.

Many of us (at least until we're in our later 60s, the experts say) adopt a proactive "It's better to do something than nothing" approach. In 2010, even as the economy still floundered, American consumers spent $832 million on antiaging skin creams and underwent more than 13 million cosmetic procedures, up 5 percent from 2009. Though the majority of those who opted for surgery were female, the number of face-lifts performed on men jumped 14 percent during that time period. Twenty-eight percent of the cosmetic procedures performed in 2010 were on 51- to 64-year-olds — second only to the 35- to 50-year-old age group.

"Since looking old affects our social status, we want to keep passing for younger," says Toni Calasanti, Ph.D., a sociology professor in Virginia Tech's College of Liberal Arts & Human Sciences and coauthor of Gender, Social Inequalities, and Aging. So we dye our hair, watch our weight, bleach our teeth, and cover up facial lines with cosmetics or smooth them out with plastic surgery. Medical intervention has gone from questionable to acceptable: Half of all Americans, regardless of income, now say they approve of it.

But some in the no-Botox crowd worry that our fixation with wrinkles has gone too far and that denying who we are isn't healthy. Last year, in an interview with Elle, even Julia Roberts complained about our culture's obsession with Botox, saying, "Women don't even give themselves a chance to see what they'll look like as older persons."

Our preoccupation with looking younger, say experts on aging, suggests there's something wrong with the aging person. "Focusing only on loss implies that individuals who are aging are less of who they once were, and it fosters negative societal stereotypes of older adults," says Debra Sellers, Ph.D., associate professor in Kansas State University's School of Family Studies and Human Services.

Others suggest that our pursuit of youthful appearance is just the latest in a history of appearance-altering practices among Americans. In the early 20th century, for example, food shortages were not uncommon, which made being fat a status symbol: A wide waist showed you had big cash — for big meals. In Victorian days, women, to appear more buxom, corseted their waists to 16 inches. In Colonial times, young men seeking promotions powdered their wigs to appear older and more credible because the aged garnered respect: Only 2 percent of the population lived past 65.

Life expectancy at the turn of the 20th century was 47; today it's 78. More than 70 million Americans are now in their 50s and 60s. Though the paths to looking beautiful and robust have changed, the motivation remains largely the same: We want to belong. "These days people are fighting the perception that they're old, because they still want to be considered players in life," says Calasanti.

The American obsession with youth started in the 1950s with megastars Elvis, Brando, and James Dean; it intensified in the '60s when teenage models like Twiggy redefined glamour. But 1990 was the watershed year when the media began to sell us on unrealistic standards for youthful beauty. How so? Photoshop. Manipulated images that erase wrinkles and traces of fat prompted many of us to feel that aging was avoidable. Over the years, as magazines and advertisers digitally altered photos of celebrities (such as supermodel Christy Turlington, who's only 42) to avoid even a hint of laugh lines, we began to wonder how we too could have ageless skin.

Thanks to medical advances and healthier lifestyles, boomers now wrestle with an interesting paradox: They don't feel as old as they look, which makes them want to look younger. After swearing for years that she would never have plastic surgery, Jane Fonda says she "got tired of not looking like how I feel." In 2010, at age 72, she underwent surgery on her face, neck, and chin. When Stanley Frileck, M.D., a Los Angeles plastic surgeon, asks his patients what they hope to achieve with surgery, most tell him that they — like Fonda — want to look the way they feel. "They are vibrant, active, and healthy people, many still with careers," says Frileck. "They don't want how they look to hold them back."

In our 30s we worried more about our hips and bellies; after 50 we become concerned with our faces. Our eyelids begin to droop, our lips get thinner, our skin loses its fullness and elasticity. It happens on a deep, cellular level — and it happens to everyone. The loss of fat in the face is the most defining change, and it can leave people looking gaunt; the skin wrinkles and sags without its support. Ironically, for years the sought-after result of a face-lift was a taut, cadaver ­ like look, but these days surgeons often inject fat under the skin to produce a plump, somewhat childlike result.

The quest to look younger has much to do with class and race. A preoccupation with one's looks is still a luxury of those who have money, and it remains predominantly a white phenomenon. Research suggests that African American women (who, as with all people of color, enjoy skin rich in melanin, which guards against age-related damage) are more accepting of their looks, but those who choose cosmetic surgery most commonly elect rhinoplasty or liposuction. Asians, reportedly in an attempt to improve their social standing by looking more Westernized, tend to have eyelid surgery more than most other procedures. Hispanics seem to focus more on their shape, preferring liposuction and breast augmentation.

But here's some encouraging news: Though each year many more of us buy into the antiage craze, polls show that millions of holdouts care more about being healthy than looking younger. Those who resist using artificial means to shave years off their appearance tend to reside in rural areas, and in the South and Northeast (with the exception of major urban centers such as Boston and New York), where tradition-bound populations disapprove of meddling with nature. Deeply held moral and religious beliefs also play a role. Buddhists, who acknowledge the impermanence of all things, are more likely to accept the face-changing inevitability of aging, as are devout Christians, who tend to believe that interfering with God's handiwork is sinful and vain.

Despite this, we're still largely an age-obsessed nation — and we're not the only one. According to the International Society of Aesthetic Plastic Surgery, countries such as Brazil, South Korea, Hungary, and Belgium share our fixation. The numbers are significantly lower in developing nations. "You're not worried about your face if you're spending your days surviving," says Calasanti. "Part of what makes Western society different from other places is that we have a strong belief inindividual responsibility. You can make changes; therefore you're responsible for making them. Phrases like giving up and letting yourself go are direct moral statements."

And what you think about aging affects how you age. Studies show that teenagers who view aging negatively develop negative perceptions of themselves when they're older.

In the end, our craving for youthful skin is really about loss, says Janos Kalla, Ph.D., a clinical psychologist in Santa Monica, California. "Aging involves being able to adjust to multiple losses — friends, career, physical losses like muscle mass and estrogen," explains Kalla. "Underneath it all is the fear of our own death."

The hallmarks of successful aging, Kalla believes, are loving relationships, relatively good health, and a zestful approach to life. Spiritual teachers such as Eckhart Tolle, the best-selling author of The Power of Now, urge us to create our own personal culture by embracing values that are important to us as individuals, not as consumers of mass media. At 63, Olivia Sabins, program coordinator in the athletic department of Occidental College in Los Angeles, has zeroed in on what may be the most important factor in accepting the physical changes that come with age. "I feel loved," she says. "I have good friends and a husband who adores me and thinks I'm still hot."

The next age-defying trend will likely involve gene therapy. Scientists came a step closer to turning back the aging process last year by using a gene-therapy technique to rejuvenate worn-out organs in prematurely-aged mice. By the time such techniques are accepted for human use, most of us now in our 50s probably won't care. Statistics suggest that resignation and acceptance of the aging process kicks in sometime in the second half of our 60s. At that point, perhaps, we'll see the wisdom in Robert Browning's poetic assertion that "The best is yet to be, the last of life, for which the first was made."