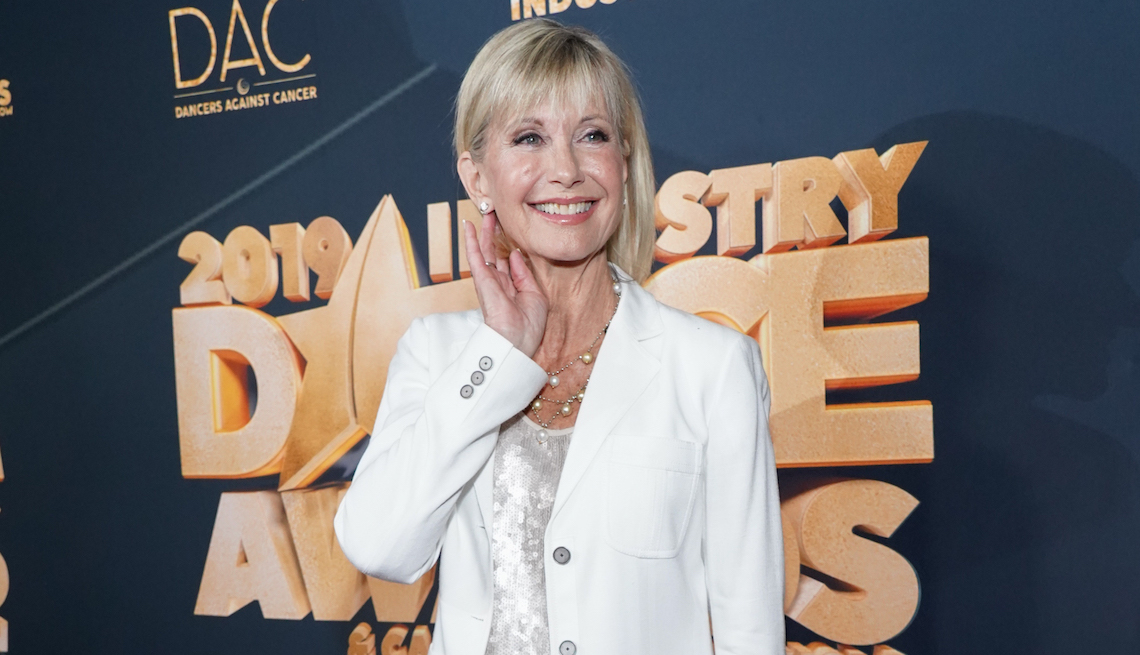 En español | Olivia Newton-John was catapulted to superstardom after playing Sandy Olsson, opposite John Travolta's Danny Zuko, in the 1978 movie musical Grease. More than a decade later, in 1992, the four-time Grammy winner made headlines when she revealed her breast cancer diagnosis at age 43.

Now 70, the British-born singer-actress — who came out with a memoir Don’t Stop Believin’, earlier this year — is managing her third cancer diagnosis. A longtime activist for cancer awareness and research, she’ll be offering up the iconic motorcycle jacket she wore in Grease’s final scene, along with other memorabilia, at a Julien’s Auctions event next month to raise funds for the Olivia Newton-John Cancer Wellness & Research Centre in her childhood hometown of Melbourne, Australia (estimated sale price? $100,000-$200,000).

We talked to her about her diagnosis and the particular challenges and opportunities it offers someone so prominently in the public eye.

When you were first diagnosed with breast cancer in 1992, did you have reservations about going public?

I was kind of coerced because the press was going to write some pretty scary things that would frighten my family. So I thought I'd better come out and be open about it in the beginning. It wasn't my plan, but it turned out to be the best thing for me. I didn't have to keep secrets. I was able to talk to other women who were going through the same thing. I found a support system.

When the cancer returned in 2013, why did you decide to keep it quiet?

In 2017, you revealed that the cancer had come back and progressed to stage 4. How are you feeling now?

I'm doing really, really well. Last year, I was in my own hospital in Melbourne. I spent my birthday there, and it was beautiful. I finished my radiation, and they wheeled me out and I had a party with my family.

Are you undergoing treatment now?

I did radiation last year. Now I take estrogen blockers. Apart from that, I do nutrient herbal-based treatments and I take a lot of cannabis. That's been a huge part of my healing. I'm trying to reach out to people and make them realize that cannabis is a healing plant.

We now know that stress can have a negative effect on health. Do you have ways to deal with stress?

Being in this business and dealing with the demands and lack of privacy, I've been dealing with it my whole life. To beat stress, I meditate, dance or sing, swim, hike, be with my animals. I've been an animal lover since I was born. We have a German shepherd, a cat (Magic), two miniature horses and 11 chickens at last count.

You don't use the word remission. Why is that?

It sounds like it's waiting to come back for you. I like to refer to it as gone or going. I try to be as positive as I can and do my checkups and live my life.

"It was cause for celebration because I got there. We're all lucky to get to each birthday because you don't know what's going to happen. You have to relish each day. Age to me is a gift."

Are you optimistic about the progress in research?

I am optimistic. We have seen great results. I hope we see more research in plant medicine. That is the future. Our bodies are becoming resistant to all the chemicals. Plants and herbs are on the planet for a reason. My wonderful husband, a plant medicine man, says we need to use the whole plant. It doesn't work if you just use a part of it.

Aging can be rough for women in show business. Did turning 70 rattle you?

Is there anything you still want to do professionally?

I think I've done it all — and more. I had icing and cream on the icing, and candles on top of that. I've achieved everything I could have possibly dreamed of. I'm very grateful.

More on Music for Grownups