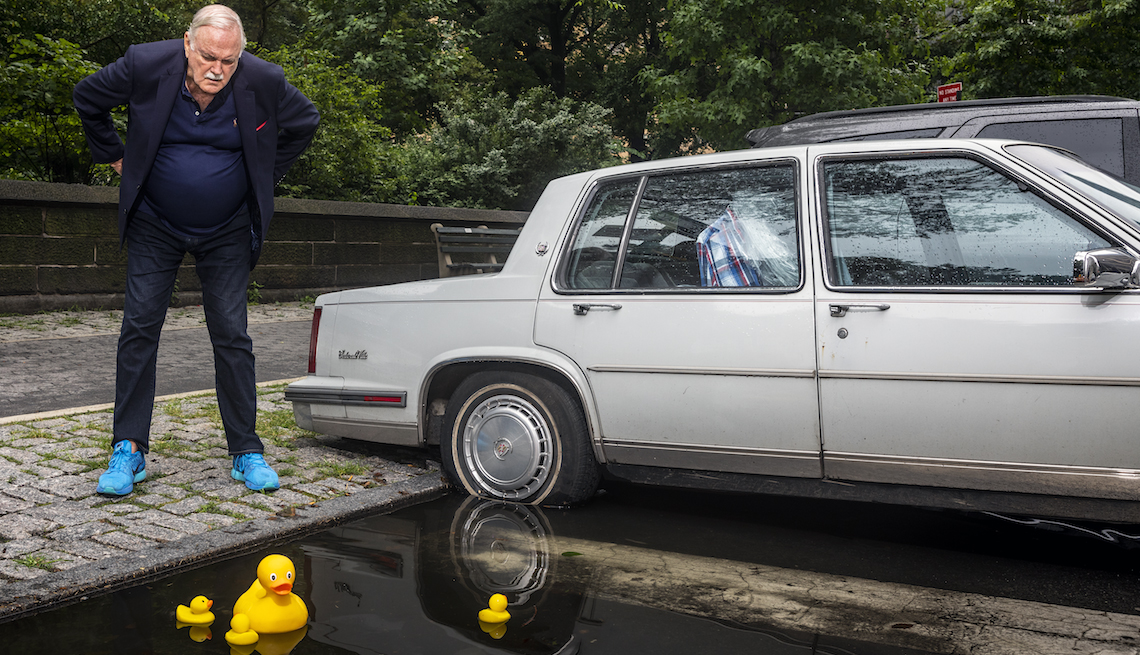 You have a book out, Professor at Large, about your experience teaching at Cornell. What drew you to teaching?

It happened completely out of the blue. I got this letter from someone at Cornell asking if I would consider being an Andrew D. White professor. And I wrote back that it sounds interesting, but what does it mean? I got a wonderful reply saying it just means that you come here twice a year to stir things up. Now that’s the kind of invitation I can’t resist.

How are Cornell students different from your ’60s classmates at Cambridge?

They are more earnest — in a good way — about their studies. When I talk to students, they say they love Cornell but they have to work too hard. I think pressuring people like that, you may be able to cram more into their heads, but it will make them less creative.

Could you do Monty Python in the current politically correct environment?

Probably not. But we were pushing it pretty hard in those days. Because the ’60s and ’70s were pretty stuffy.

What’s political correctness about? It’s about not offending people. Does that mean that you can’t challenge other people’s ideas? That’s exactly what should happen in a university environment. It’s like you’re having a lovely party and down the stairs comes the maiden aunt. So, everybody behaves in a very restrained way to avoid upsetting the maiden aunt. So, the question is: Do we want standards of offending people to protect the touchiest, weakest and most self-serving or the reasonably robust who don’t take themselves too seriously?

What do you think of the state of comedy today?

Being funny is very difficult and not that many people can do it. But you can get in front of an audience and shout and swear a lot. My daughter’s doing stand-up. She’s very good, but I’ve seen a lot of other people who are very vulgar, very sexual and quite aggressive, but not in a clever way. It’s comedy for people who don’t have much of a sense of humor.

What have you noticed touring lately?

A lot of men in their 60s thank me, and they say it with a tear in their eye. They say, “Thank you for helping form my sense of humor.” Which is a great tribute.

"As I’ve aged, I’ve found the world far, far more ridiculous than I used to think."

How do you view the role of comedy?

I used to think comedy was a luxury, but now I see it’s much more important. As I’ve aged, I’ve found the world far, far more ridiculous than I used to think. I think some of us reach a point when we look at the world and think, This place is so crazy that I really can’t take it very seriously anymore.

How does creativity change as you age?

Now that you’re turning 80, what do you want to put your energy into?

Right now I’m scrambling to put together enough money to buy a home in the sun. I’m very happily married. I call Jennifer, my wife, “Fish,” because she can’t get through the day if she doesn’t get a good swim.

What do you think is the meaning of life?

I believe that there’s an afterlife, although I can’t explain it. I think the evidence is too strong that there’s something going on there that contemporary science knows nothing about. If I have anything useful to do, apart from making people laugh now and then, it’s to persuade people that this stuff ought to be looked at — without making great assumptions about what it means or how it happens.

So why do you call yourself the top lemur?

I love them. There was a zoo across from school and I would look at them all the time. I did a documentary on them in which I joked that I should have married one. Of course, that was before I met my wife, Fish.

So now you’re into fish.