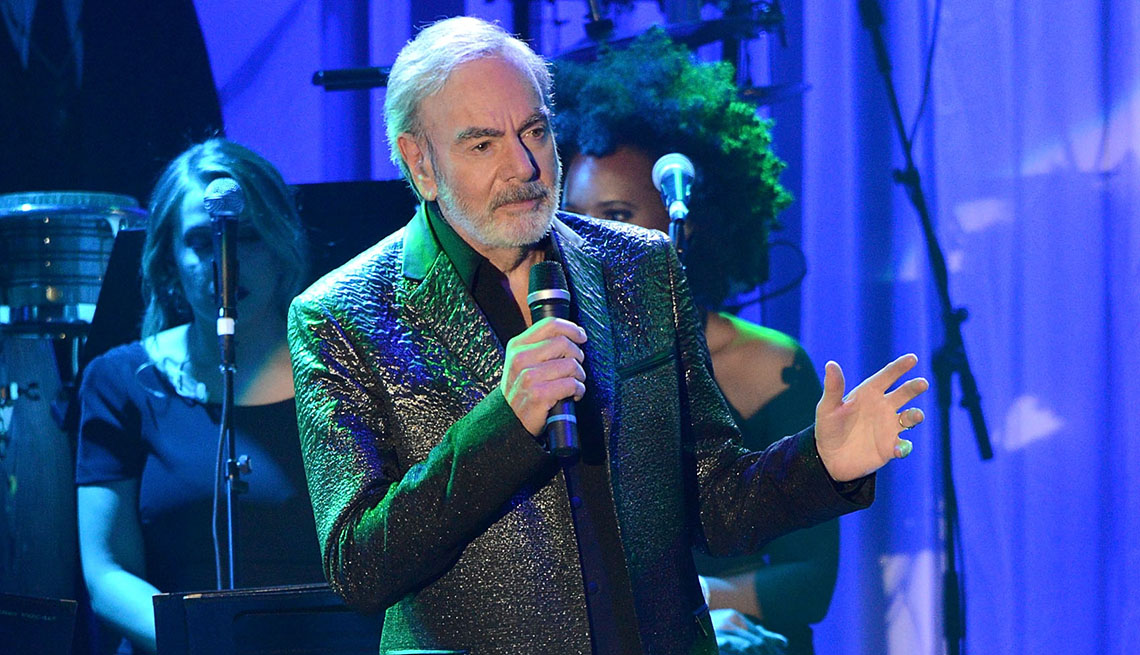 Neil Diamond performs during the Pre-Grammy Gala and Salute to Industry Icons event in February 2017.

﻿Neil Diamond, who turns 77 Wednesday and gets a lifetime achievement award at the Grammy Awards on Sunday, announced Monday that he has Parkinson's disease and has canceled his 50th anniversary tour. He said he will no longer tour, but that he'll continue recording. Parkinson's disease is a brain disorder that affects movement. The illness also has struck Michael J. Fox, Robin Williams, Muhammad Ali and Johnny Cash.

Unlike Linda Ronstadt, 71, who quit singing after a Parkinson’s diagnosis, Diamond will continue his singing career despite his "great reluctance and disappointment" for canceling tour dates and inconveniencing fans, he wrote on his website. He said he intends to "remain active in writing, recording and other projects for a long time to come."

Characteristically chipper and witty, Diamond told his fans: “This ride has been 'so good, so good, so good, thanks to you,'" alluding to lyrics in “Sweet Caroline,” which he wrote against a short deadline at his first recording session in the early 1960s. He led a Times Square crowd in singing the tune last New Year’s Eve in New York.

Over the decades, Diamond has scored 53 songs on the Billboard pop singles chart, with 13 reaching the Top 10 and three hitting No. 1 (“You Don’t Bring Me Flowers” with Barbra Streisand, “Cracklin’ Rosie” and “Song Sung Blue”). Even without touring, he evidently feels the same as he did in 2014, when he ruled out retirement. “I think it would be horrid for me. Stopping would be very difficult,” he said. “It’s part of who I am.”

“I’m rooting for you Neil!” tweeted Barry Manilow. “Fight on from another Brooklyn boy!” Brian Wilson tweeted. “So much respect for #NeilDiamond. Feel honored to have seen him live. Wishing him strength and good wishes.”

Parkinson’s can strike at any age — Fox was 29 when diagnosed — but the average age of onset is 60. There are about a million Americans living with the illness. It is 50 percent more likely to strike men than women. Tremors are a risk for 70 percent of people with the disease, but 89 percent are at risk of speech and swallowing disorders.

Despite sometimes dangerous complications, “Parkinson’s itself does not shorten life spans,” and patients can thrive into their 90s, says Samantha Elandary, CEO of Dallas’ Parkinson Voice Project, which treats 400 patients. “All people hear is, ‘It’s progressive, there is no cure.’ But with intensive speech therapy, they can get better. Humans have two motor systems, automatic and intentional.”

Automatic movement requires the neurotransmitter dopamine, which Parkinson’s destroys. “But people have a backup system, the intentional system, that’s just waiting for them to activate. They can walk better, talk better, write better, cut their meat, open their car door.” Untreated, Elandary warns, “Parkinson’s won’t kill ’em, but life will be pretty bad.”

Since automatic motor skills don’t return, patients must learn to move and speak intentionally, and be diligent about therapy. Ronstadt, whose life with the disease remains inspiringly creative, advises: "If you're going to have Parkinson's, you better have a sense of humor. Because somebody wants to surprise you with Mr. Toad's wild ride — you wake up in the morning and you have this collection of symptoms. You don't know what's going to show up."