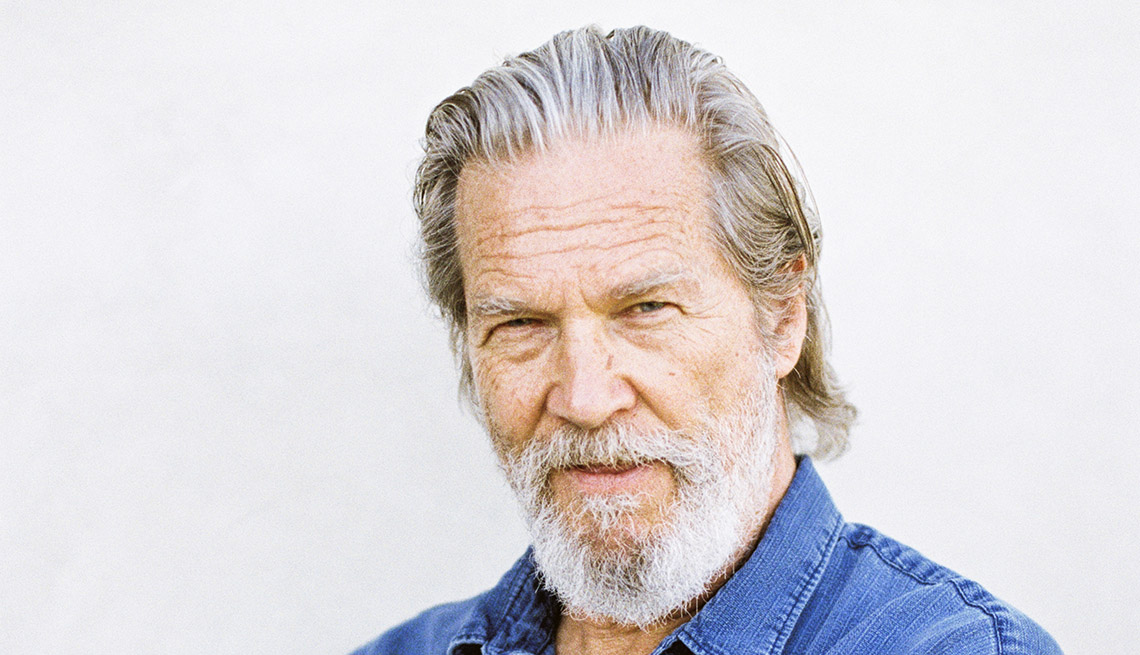 Turns out, you can learn a lot about a man by asking him about his sleep, as we discovered while chatting with the immensely talented and effortlessly engaging Jeff Bridges, who’s not only the star of next month’s much-talked-about Bad Times at the El Royale but also the richly soothing voice and quirky imagination behind the internet sensation known as Sleeping Tapes. The album, as he calls it, is a podcast-like ode to all things nocturnal (bedtime stories and new age-y music included) and, most important to Bridges, raises money for Share Our Strength's “No Kid Hungry” campaign.

I had the pleasure of listening to your Sleeping Tapes at work all afternoon yesterday.

I don’t know if I had to do that, but I thought it could count as interview prep.

Definitely! You had to do it!

Now I know that an ad for the album first debuted at the Super Bowl and that it's now being sold on a just-launched site called Sleep Club [joinsleepclub.com]. How did you happen to start working on it?

Well, it was a fascinating experience for me. Two years ago somebody approached me about Squarespace, this web-design company. They wanted me to do a Super Bowl commercial but not the typical, “Hi, I’m Jeff Bridges. Use Squarespace— they’re a good design company.” They wanted something more creative, and their idea was for me to come up with an absurd product that they would make a website out of, with the idea that there is no idea that is too absurd not to make a website out of.

So they had this long list of things, and “sleeping tapes” popped out for some reason. And I said, “What is sleeping tapes?”  And they said, “Well, we don’t know. It can be whatever you want it to be, soothing sounds, whatever.” And I said, "Yeah, yeah, go on.” And they said, “We’re gonna make that product, and we’ll make a website for that product, and all of the proceeds from that product will go to ‘No Kid Hungry’ — which they knew I was the national spokesperson for. That was the hook for me. I said, “Oh, I’m in."

And was it like, turn on your iPhone and start recording?

They had a bunch of writers who helped supply some ideas, and they worked with me on it. And I got my dear friend [the musician] Keefus Ciancia involved. I’d worked with him on an album I’d done with T. Bone Burnett years before, and then I thought my good friend Lou Beach could write some bedtime stories we could put in there and he could design the cover. … So it was very much like, come on, let’s make a record! It can be anything we want!  With that spirit, we just let our imaginations go, and it turned into what it turned into. … And then it rose to number 2 on the new age charts, which was totally surprising. And I love it. I listen to it myself every once and a while, and it brings back all kinds of memories.

And over time it's made some money for your charity?

So far it's made over a quarter of a million dollars for “No Kid Hungry.” Isn’t that wild?

Did anyone who listened to Sleeping Tapes ever tell you it actually helped them fall asleep?

A few people. A lot of people said it scared the s--- out of them. It was frightening to some people. … And I said, “Well, sleeping is about dreams. Some are good; some are bad."

Would you describe your Sleeping Tapes as more like performance art or health aid?

Definitely a performance piece, and it has health ramifications!

If you had to pick one moment that things got weird for you as you made the Sleeping Tapes — which we might mention cover everything from a sweet daydream about a drive out to the sea to a bit about how you might store your own remains on a satellite one day — what might that moment be?

Well, I like the moment — it’s good weird — where I woke up and was using the iPhone — I did a lot of recording for this on the iPhone — to record some humming work, and here comes my wife, just having gotten up from a night’s sleep, and I invited her to perform with me, and I liked that moment, and I’m glad it was captured.

She seemed like she was a good sport about that.

She’s a good sport … up to a certain point [he giggles]."

And she did have a nice hum.

I know you’re a proud grandfather. Having grandkids, does it bring it back for you how much trying to sleep, and trying to get them to sleep, really takes center stage for a while as a parent?

Well, it’s my grandson Benjamin’s birthday today, and I know my daughter Isabelle has struggled with sleep. It’s important when you’re raising kids to get as much sleep as you can, because they’re gonna keep you up, you know. So how do you do that? That’s something she’s very concerned about, too.

Maybe she needs your sleeping tapes?

Yeah, I tell her, “Have you listened to the tapes?” And she laughs.

What does your own sleep life look like, and can you share any tips you find helpful for getting better sleep?

I have different periods; some periods I sleep very well at night, and then other times I have some sort of insomnia. I don’t particularly like the prescription stuff. I’ll do some melatonin, though.

There are times I’ll have insomnia and I’ll say, Oh, it’s time not to sleep; I’ll get up and do something.

And I’m a napper, especially when I’m working on a movie. During lunch hour I’ll usually have my lunch waiting in the trailer there, and I’ll eat my lunch, and then I’ll lie down for 15 or 20 minutes. And that really helps. 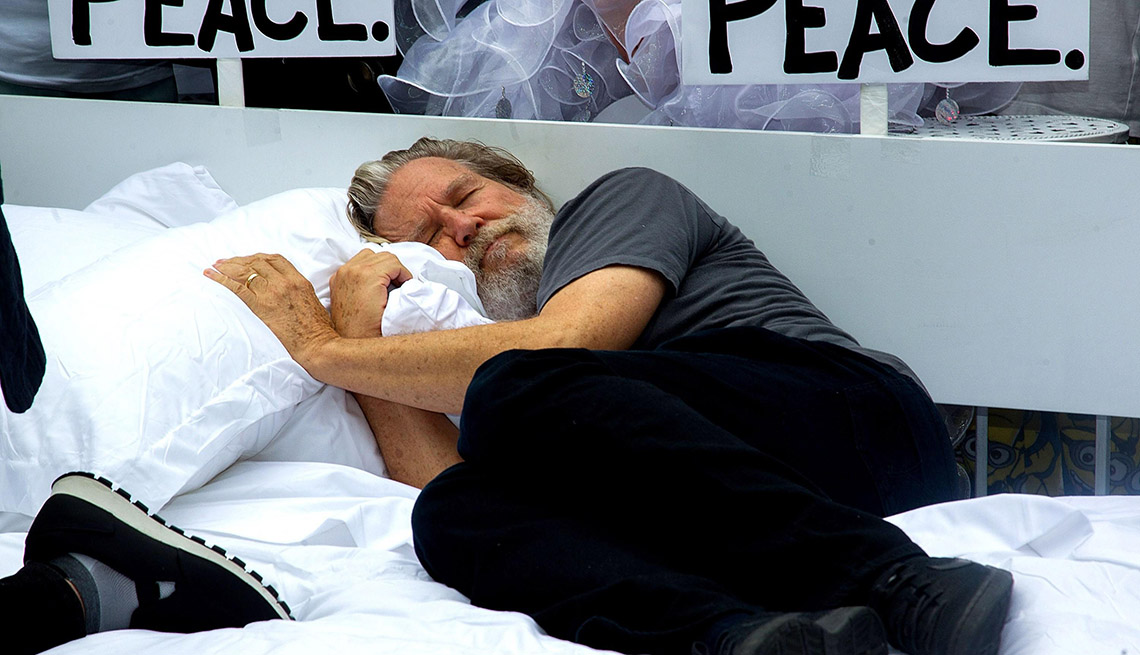 Jeff Bridges at a Sleep Club event on Sept. 13 in New York City.

What’s the next project you’ll be napping during/working on?

Well, it’s kind of one of those things where when it rains it pours. Right now I’m working on promoting a few projects that are coming out, like this film called Bad Times at the El Royale.

It was wonderful working with a great cast, and both Drew Goddard, our director and the writer, was wonderful to work with. It’s a very surprising kind of fresh film. And then I’m very pleased about a movie called Living in the Futures Past that is coming out, and it’s a documentary about the environment and climate change and how can we create the kind of world we have good dreams about — the kind of world we want our kids and grandkids and their grandkids to grow up in. Hopefully, it will inspire people to see what they might do to head in that direction.

Is climate change one of the things that keeps you up at night?

Well, more than that, after we made this documentary, we had that terrible Thomas fire here in Santa Barbara where I live, and the fires burned all the foliage, and that created a debris flow that wiped our house out. We had to be rescued by helicopter and lost most of our stuff. So I got a kind of firsthand experience with the change that’s going down.

I’m sorry to hear that.

Oh, but there is one other thing I thought of that I do when I try to get to sleep. Something I do sometimes is to close my eyes … and if you notice when your eyes are closed — so go ahead and close and kind of squint your eyes right now.

Are your eyes closed?

Like right now, what do you see with your eyes closed?

Right, now watch those bright circles. What are they doing?

There you go! And I find that if I do that, and I start to have a conversation with myself, talk about these things that I’m seeing, I get in kind of a state of wonder. What are those things? Are they a function of my eye, or are they a function of my mind? And I look at them and it kind of soothes me and puts me to sleep, just getting my mind off of all these other thoughts.

The mind is something, isn’t it? It just … secretes thoughts. That’s one of my personal techniques.