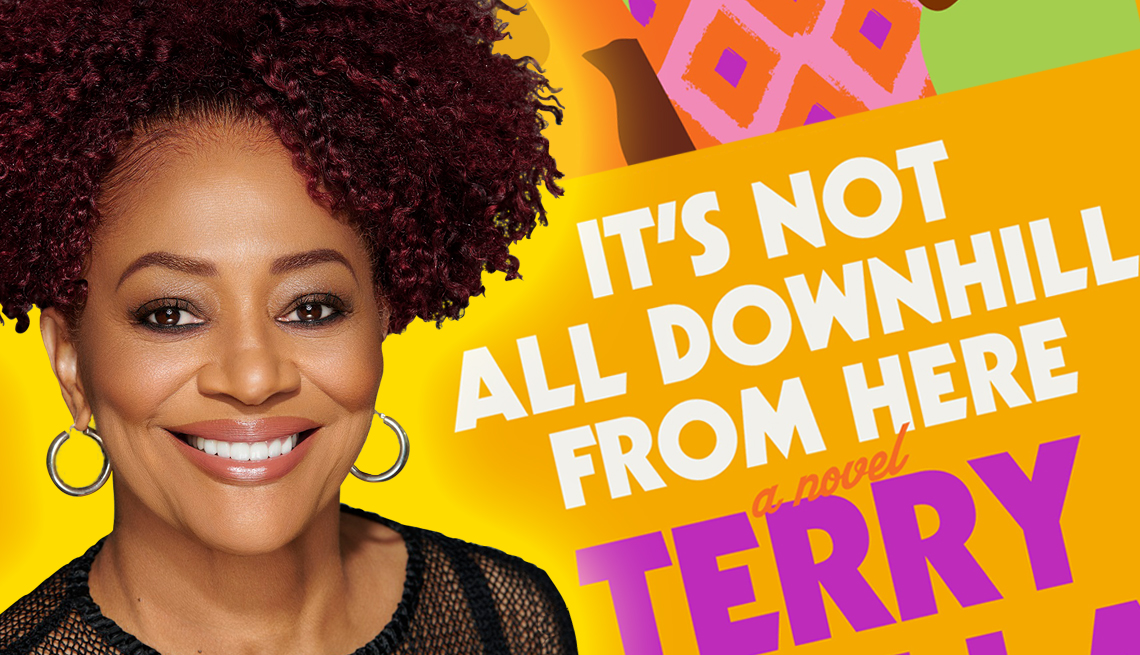 Readers loved Terry McMillan’s deliciously entertaining best sellers, 1992’s Waiting to Exhale and 1996’s How Stella Got Her Groove Back (both made into hit films). Her warm and witty new novel, It’s Not All Downhill From Here, is just as appealing but more mature. It’s about a group of friends in their late 60s and beyond, focusing on Loretha Curry, a 68-year-old Californian (like the author), whose world is upended by a sudden tragedy. With the support of her longtime buddies and her own resiliency, she pulls through, optimism intact.

McMillan is known for creating wonderful, strong, big-hearted female characters. Meet her latest addition, Loretha, in the first chapter of It’s Not All Downhill From Here.

Read below, or listen to the audio version.

Audiobook excerpt courtesy Penguin Random House Audio from It’s Not All Downhill From Here, written and narrated by Terry McMillan

I don't want another surprise party.

Which is just one reason why a few weeks ago, when my husband, Carl, called while I was walking our dog, B. B. King, to the dog park and asked what I wanted to do for my birthday this year, I politely said, “Baby, let's try to figure out how to get our second wind."

At first Carl high-pitch chuckled like he was a soprano or something, then he said, “Will we need a boat?"

I chuckled right back, even though I was serious as a heart attack.

I knew he didn't really get my drift. What I meant was, since we both had more days behind us than we have ahead of us, how about we try to figure out what more we can do to pump up the volume? It's not that our life is boring. Well, maybe it is, a little. But even though we don't do very many things that generate excitement, I still love him more than my Twizzlers! Carl is a retired contractor who refuses to retire, and after 30 years of all work and no play selling hair and beauty products in two stores too many, I don't exactly qualify as a thrill a minute either.

I released B. B. King's leash inside the dog park, but he just stood there shivering, as if he were waiting to be invited to participate in some activity that didn't require him to run or jump. In human years, he and I will soon be the same age: 68. His whiskers and eyebrows are peppered with gray, but unlike me, B. B. doesn't dye his hair. He is our third German shepherd and I don't want to think about how long it will be until he doesn't want to, or can't, hop in the back seat of my Volvo station wagon, which I will drive until, like me, it stops running.

I sat on the green metal bench and watched him sniff a friendly chocolate poodle. I realized I was hoping and praying I wasn't going to have to sit through yet another lackluster party where nobody even thinks about dancing until they hear a song you have to be damn near 70 to remember, which I suppose now includes me. And that's if you call doing the cha-cha-cha in flats or espadrilles or 2-inch wedges with rubber soles to a beat they all hear differently, dancing. I don't. I watch music videos on YouTube. I find myself rocking my future-size-12 hips, swinging and swaying my shoulders and popping my fingers to the likes of “Single Ladies” or “Uptown Funk” by that little cutie Bruno Mars until I have to wipe my forehead. I have not forgotten how to dance. In fact, sometimes, Carl will sit in his leather recliner, lean way back, and just watch me swirl around in my 3-inch heels, which I wear to work every day because I like to appear glamorous. In those moments I feel pretty and sexy and 40. Carl just nods his head like he's agreeing and pops his fingers until the smile on his luscious lips begins to disappear. Then he might hold up his index finger, suggesting that I give him a minute but don't stop dancing, slowly push himself up to a standing position, and limp down the hallway to take one of his little blue pills.

Oh, hell. Here I go again. Meandering. I'm just going to have to stop apologizing for it, because from what I've learned reading my AARP newsletter, this is only the beginning. Though, truth be told, forgetting what I was talking about and going off on tangents isn't completely new to me. Back in my 20s, I smoked a lot of reefer with my friends. We'd all sit in a circle on the floor on giant pillows and have deep conversations about the purpose of life or something having to do with God or how we were going to change the world, but then we'd all stop talking because we were suddenly mesmerized by the lava lamp. Then somebody would realize they were one step away from freaking out and would jump to a standing position in order to snap out of it, and then they'd ask: “What the f--- were we just talking about again?” And since not one of us had a clue, we'd just start passing the joint until the next philosophical inquiry overtook our minds.

Thank God I got tired of thinking about things that didn't matter and realized I liked the way I felt when I wasn't under the influence of anything. And when I didn't like how I felt, it was a hell of a lot easier to figure out how to deal with it when my head was clear.

Anyway, now I'm a certified senior citizen, and my mind has earned the right to go wherever it wants, so I decided that when I can't remember something, it must not have been that important anyway. But sometimes, when I do remember, it feels like an accomplishment.

Like right now, I'm remembering last year's dull party. My feelings were hurt because both my twin sister, Odessa, and my one and only daughter, Jalecia, had been no-shows. Now, Odessa is a bitch and proves it on a weekly basis. Like I said, she's my twin. But there are two things about us that make us special. First of all, we were born in different years. I'm December 31 and she's January 1. We are also technically only half sisters, even though we're fraternal twins. Apparently Ma was a hot number back in the day and slept with two different fellas only days apart. This probably explains why we are nothing alike and why we're not as chummy as most twins. Ma didn't bother to tell us this until we were in junior high, but by then we weren't interested in who our daddies were.

It's a fact that Odessa has been jealous of me for years. Jealous I was crowned the first black homecoming queen at our predominantly white high school 50 years ago, even though I wasn't pretty then and I'm not pretty now. Jealous I know how to make myself appear to be more attractive than I am, and occasionally still get honked at. Jealous of my being a successful entrepreneur. She has never once come into my Pasadena store. Never once given me a compliment, no matter how nice I might look. I didn't know our lives were a contest. I love her, but in all honesty, I don't really like her, and if she wasn't my sister I probably wouldn't have anything to do with her.

Right before Odessa took early retirement at 50 from her job as a policewoman for the City of Pasadena, her husband left her for a 43-year-old ex–Lakers cheerleader who could still do the splits. Odessa wiped him out and bought a house that seemed purposely much bigger than mine up in the hills of Altadena. Then she started going to church like some people go to AA. Her personality changed after the Holy Ghost struck her, but she doesn't seem to see how unhappy she still is or acknowledge that maybe God intentionally leaves some gaps for us to fill in. She started acting like she would get electrocuted from a mere whiff of alcohol. Before she retired, she lived in bars and just sat around waiting to arrest somebody, but now she won't go inside any establishment where liquor is poured.

My daughter, on the other hand, has the opposite relationship to alcohol. She's had an on-again, off-again love affair with alcohol and lately with some of those designer pain pills for people who aren't in pain. I fired her from my store for stealing from me. Me, her own mother, who gave her a job because she hasn't figured out what to do with her life after 40 years. That is apparently my fault because I had a job and then a business and then a divorce, so her failure to launch is payback for my not having been present enough or generous enough. But I couldn't be everywhere at once, and I'm tired of being punished for it. She didn't come to my party and hasn't spoken to me in more than a year.

All I can say is thank God for sons, or I should say son, since I only have one. Jackson is Jalecia's younger brother and the product of my second marriage. He wasn't at my party last year either, but he had a good reason. He lives in Tokyo with his wife, Aiko, who had just given birth to premature twin daughters. They still needed a few more months to grow and they needed their daddy there.

My BFFs were there, though. Lucky. Sadie. Korynthia. Even Poochie made the trip from Vegas. I grew up with all of them. Occasionally we all get on one another's nerves. Sometimes to the point that our friendships get temporarily annulled. But we always come running back because we have loved one another longer than some of us have loved the men in our lives.

Excerpted from It's Not All Downhill From Here by Terry McMillan Copyright © 2020 by Terry McMillan. Excerpted by permission of Ballantine Books. All rights reserved. No part of this excerpt may be reproduced or reprinted without permission in writing from the publisher.

Available at Amazon.com, Bookshop.org (where your purchase supports independent bookstores), Barnes & Noble (bn.com), and wherever else books are sold.