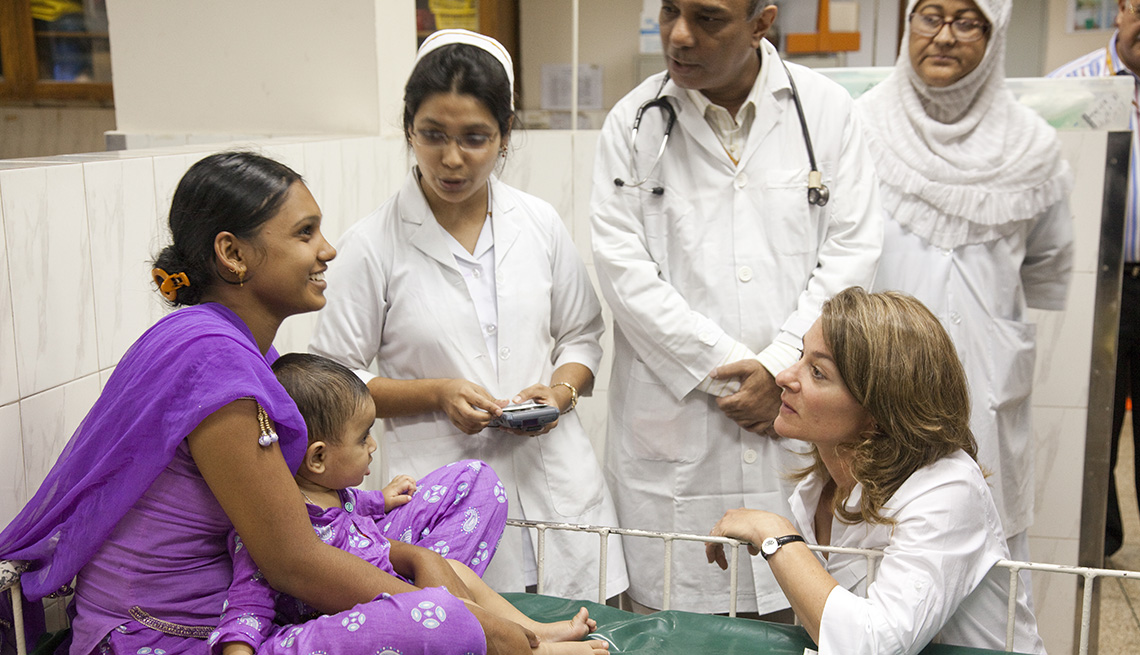 Melinda Gates talks with a mother and daughter in Dhaka, Bangladesh.

Melinda Gates has worked with her husband, Bill, to donate billions of dollars to struggling people in developing countries through the Bill & Melinda Gates Foundation (its motto: “All lives have equal value”). In her new book The Moment of Lift: How Empowering Women Changes the World, she offers stories of the inspiring women she’s met around the world, and a call to action for both men and women to “crack the patterns of history.” We talked to Gates about her life and philanthropy.

What was your biggest misconception when you started your foundation?

That if we had a breakthrough — a new vaccine, a new contraceptive, a new seed — and we got it into the supply chain, it would reach men and women equally. That turned out to be a very false assumption. Even if a country’s government says it wants to deliver these tools, few actually make it into the hands of women.

In your book, The Moment of Lift, you write about a heartrending encounter you had with a young woman in northern India. Was that an “Aha!” moment for you?

Meena was a woman I met at a health facility we’d helped fund. She’d recently given birth, and we had a warm conversation, mother-to-mother, about bonding with a new baby. But when I asked if she planned to have more children, she said, “The truth is, no. I don’t know how I’m going to feed this child. I don’t have any hope of educating him. The only hope I have for this child’s future is for you to take him home with you.” The conversation crushed me. I had to tell her, “I’m so sorry. I can’t.” I started digging and learned that more than 200 million women in developing countries wanted access to contraceptives but didn’t have it.

Your global campaign to give contraceptives to 120 million women by 2020 has made you unpopular in some places.

I’m a practicing Catholic, but I really had to follow my conscience on this one. I was seeing so much death in the developing world. I would go out and get 60 women in a village together and ask them to raise their hands if they knew of someone who had lost a child in childbirth. Every single hand would go up! The lack of contraceptives — and having children too soon and too often — was causing an immense amount of misery.

Hans Rosling, an expert on international health, once told you, “American billionaires giving away money will mess everything up.” How do you avoid that?

He advised me to always go to the margins of society. He taught me that I needed to go out and talk to women and understand — with data — where they were being held back on a societal level.

That’s not just a developing-world issue, is it?

Correct. I remember looking a few years back at how far women had actually come in the United States. I thought we were fully empowered. But less than 5 percent of the Fortune 500 CEOs were women. And when I went through each industry systematically, I realized that we still had a long way to go.

What steps have you and Bill taken to make your marriage more equitable?

When I got pregnant with our first child, I surprised Bill by saying that I wanted to leave my job to stay home with the baby. We fell into pretty traditional gender roles. But, over time, we’ve gotten more intentional about making our partnership a truly equal one. At the beginning, I was happy for Bill to be the public face of the foundation. I realized later that it was important to me that I was seen as his equal there. There were moments when that took a little push but, for the most part, I’ve had Bill’s support. He’s a data geek, so he’s seen the research that says equal partnerships tend to be happier ones.

How about in the Gates household?

We all do the dishes together after dinner. But one night I was still in the kitchen 15 minutes after everyone else had dwindled away, and I thought, This isn’t right. So the next night, when people started to drift off, I put my hands on my hips and said, maybe not in the most elegant way, “Nobody leaves the kitchen until I leave the kitchen.” Bill and the kids gave me this surprised look. I said, “Look. After you guys leave, I’m still doing X, Y and Z.” Guess what? Everything I did in 15 minutes got done by all of us in five minutes.

It took me half a century on this earth, but I finally had an epiphany that my best self was not my most polished self. I think I’m actually a better version of myself when I’m willing to role model for others that all of us are imperfect and flawed.

What did you learn from talking to sex workers in India?

Every single person in society looks down on them. They are the lowest of the low. At hospitals, the nurses won’t even touch them. But they had the courage to band together and go to health facilities and demand their rights. They taught me that when women lock arms, at whatever level in society, they can change the world.

More on the Gates