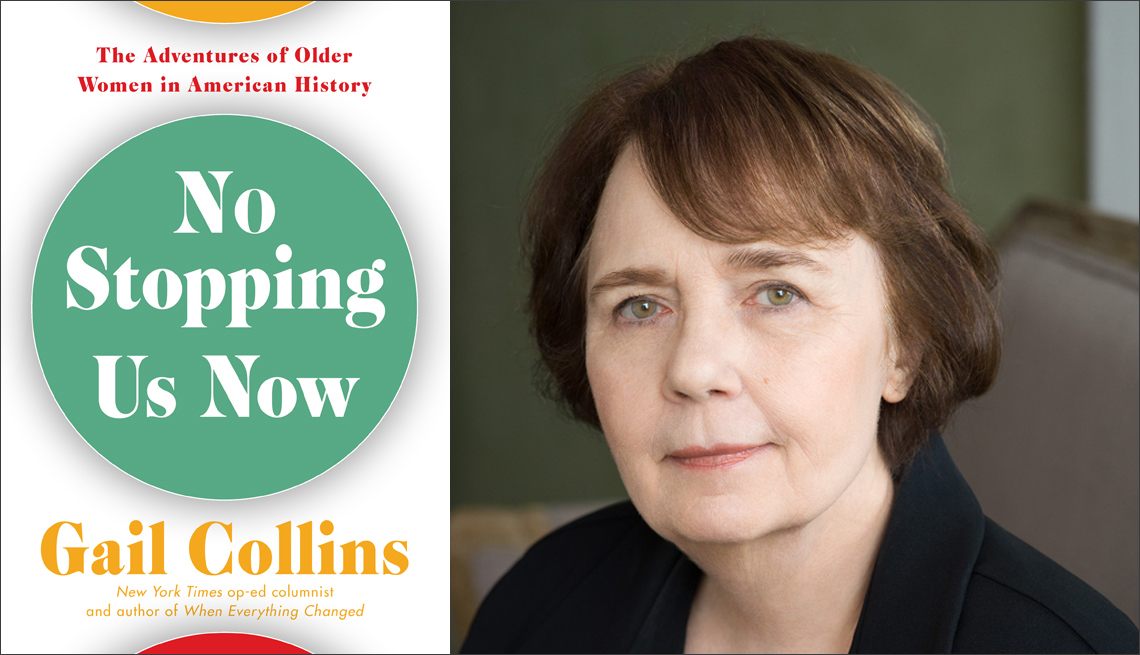 Columnist Gail Collins has written about politics for the New York Times for decades — becoming the first female editor of the paper's editorial page in 2001 — as well as five books on politics and history. Now she's authored No Stopping Us Now: The Adventures of Older Women in American History, a new look at the ever-evolving ways women and aging have been viewed through the decades, from the labor-intensive colonial era — when “nobody was going to tell you to slow down because your hair was getting white” — to modern times.

Her interest in the subject was piqued, she says, when she was researching her earlier book, When Everything Changed, about women's progress since 1960 (when they still needed their husband's permission to receive a credit card), and came across a letter that the male colonists had written to townsfolk back home in England, pleading for wives — even older ones — to join their hardscrabble new settlement. “Their desire was for somebody who was ‘civil and under 50 years of age,’ “says Collins, 73. “I thought, Wow, this [perception of older women] can go up and down.”

And there were plenty of women pushing against, and sometimes helping to change, society's perceptions. Collins writes about many of them, including Sojourner Truth, Mae West and Mamie Eisenhower.

Her own thoughts on aging? “You're not done until you see yourself as done. Getting older is an adventure like everything else in life: You've got to grab it and run with it.”

The Introduction from No Stopping Us Now by Gail Collins, excerpted with permission from Little, Brown and Company:

"In this youth-made world, when a woman's over 25, she's considered old. Or on the way,” began a 1971 ad for hair coloring. It went on to assure the reader — after quite a bit of depressing verbiage — that all was not lost. With Loving Care on your side, “You're not getting older. You're getting better!”

Well, that was a relief.

The ad became a classic. For years the “You're not getting older” slogan would pop up all over the place — at one point in a heavily orchestrated song with a melody so triumphant you'd have thought it was celebrating a moon landing, or the evacuation of Dunkirk.

We're a lot more sophisticated now. Nobody thinks 25 is old. But virtually nobody who spots her first gray hairs is going to sigh virtuously and let nature take its course, either. “There's a reason why 40, 50, and 60 don't look the way they used to,” Nora Ephron once wrote, “and it's not because of feminism, or better living through exercise. It's because of hair dye.”

We've expanded our vision of what women can do at any age — Ruth Bader Ginsburg working out with her personal trainer at 86 before a day at the Supreme Court sounds perfectly reasonable, not to mention deeply desirable. But that doesn't mean our prejudice against growing older has been erased. If it had, the 7,000 or so cosmetic surgeons in America would be way underemployed.

This is the story of women and age in America, from the colonies to the 21st century, from Martha Washington to Hillary Clinton. There were definitely some points when getting older was easier than others. That's always been the case, throughout history, around the planet. “Herodotus tells us of some tribes who worshipped their elders as gods and of others who ate them,” wrote historian David Hackett Fischer. The extremes in America, fortunately, have been somewhat less dire.

Who counts as an “older” woman? Well, there have been some pretty dramatic swings in opinion. In the early Colonial South, any woman short of menopause counted as a hot young marriage prospect. But after the American Revolution, in female-laden Northern cities, turning 30 without a husband meant entering the realm of old maid-hood. This is not going to be a tale of steady progress toward an age-indifferent tomorrow.

However, we can definitely pick out some eras that look more enticing than others. And then decide whether the one we're living in now is a moment of real transition.

Traveling through American history, we'll see how attitudes toward women in their middle and later years shifted. There are some very clear patterns. One is that matter of scarcity. A 50-year-old widow could start her own business while choosing from among a dozen eager suitors, if she happened to be one of a handful of females in a gold rush town in the middle of the 19th century.

The second, inevitably, is economic. Eras in which older women were able to earn money or increase their family's assets were eras in which they were ... popular. In Colonial times, a widowed grandmother who was a skilled spinner or sausage maker got plenty of respect. Jump ahead 100 years, move to a city, and your middle-class housewife had only one job to do: have babies and rear them. When the kids were grown, she was consigned to a rocking chair in the corner — metaphorically and frequently literally.

Our first generation of great female public figures came into their political prime in the mid-19th century, when they were in their 50s or 60s. Their America still believed a woman's place was in the home. But some canny strategists — like Elizabeth Cady Stanton — came up with a pseudo compromise. They stayed home, raised the kids, and then took off on their lecture tours, bearing their gray hair as the proud proof that they'd followed the rules. Now it was time to raise hell and fight for abolition and women's rights.

Suddenly, women were composing odes to menopause. One mid-19th-century reformer announced that the end of fertility was a time for “super-exaltation.” On the other hand, that was also a time when some doctors were beginning to theorize that postmenopausal women who engaged in sex were risking their lives and their sanity. There are no periods in American history when all the news is good.

During the period between the Civil War and the end of World War I, female entertainment celebrities tended to be older. You could be a glamorous singer at 50 and a famous beauty on the stage at 60 or 70. That was the age when “popular entertainment” meant lectures and theater. Then came the movies, with their unforgiving close-ups, at the same time that an enormous economic boom put outrageous new consuming power into the hands of the young. Older women were no longer in vogue or in view. In popular films of the day, they were usually busty dowagers sternly disapproving of their male counterparts, who swanned around speakeasies with showgirls.

“You're not done until you see yourself as done. Getting older is an adventure like everything else in life: You've got to grab it and run with it.” — Gail Collins

The national mood got serious during the Depression and World War II — and Eleanor Roosevelt was the most admired woman in the country. Then, after another postwar obsession with the consumer power of the younger generation, came the women's liberation movement, whose heroines included middle-aged women like Betty Friedan and Ella Baker. At about the same time, the New Left was preaching, “Don't trust anyone over 30.”

The biggest changes for older women were sparked when the booming post–World War II economy sputtered and families found it harder and harder to live a middle-class life on just the husband's salary. Suddenly women who had always been raised to aspire to domestic bliss began to be valued for their moneymaking potential. I have a vivid memory of talking with a group of male college students in the 1980s, all of whom agreed that the most important qualities in a wife were personality and “good earning capacity.” They were probably downplaying physical attractiveness for the benefit of the visiting feminist. But it was still a sea change — after a national history in which men remained in their “prime” decades after women were judged old and on the shelf, things were evening out a little. (Yeah, you say, but what about female movie stars who get put out to pasture at 35? Yeah, I say, well, what about Meryl Streep? We'll talk.)

Besides the social challenges aging women face, there are, of course, physical problems. The body deteriorates with time, but the process was a lot faster if you happened to be getting older in an era when there were no antibiotics, sanitation was bad, and even relatively simple injuries during childbirth could cause a lifetime of misery. It's no wonder that Colonial Americans regarded a healthy old age as a sign of God's special favor — though not even a benevolent deity seemed capable of guaranteeing a healthy set of teeth. Back then, women who got sick or became invalids were counseled to regard their disabilities as divine will, and a welcome opportunity to demonstrate the virtue of suffering with a smile. That philosophy reigned for some time, until health reformers popped up and started arguing that a hearty old age was less about God and more about proper diet and exercise. (And, in some quarters, avoidance of sex.) Popular ministers in the late 19th century mixed the two themes and argued that virtuous behavior would win you a long life span, while bad thoughts and deeds meant a miserable decline starting around 50.

Now middle-aged women looking at census projections may start thinking about what kind of career they'll want in their 80s. We've lived through an era of such extraordinary change and expanding possibility that it sometimes seems as if nothing, including age, can slow us down.

Imagining the future is easier if we look back on where we've been so far. Whether it's a 77-year-old midwife riding out in the middle of the night to help a patient in 1800 or an 80-year-old riveter making planes during World War II or an 86-year-old justice getting in shape for another Supreme Court session, the heroines are the women who fight back age by living for something more than just survival.

And we'll raise a glass to toast whatever comes next.