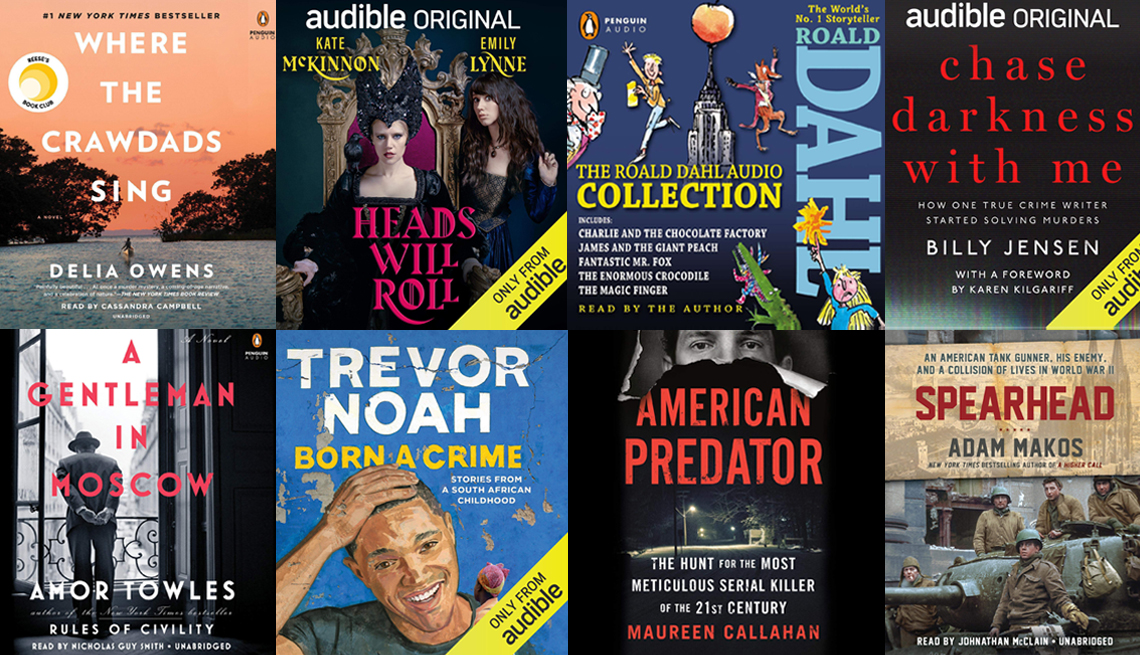 You can listen to audiobooks on any ordinary day, but they're especially wonderful entertainment when you're behind the wheel on a long road trip. Plus, there are stories for every interest, mood and length of drive.

A few suggestions, if you feel like listening to:

The host of the Daily Show makes a stellar driving companion in this Audie Award-winner, Noah's memoir about growing up with a white father and black mother in apartheid South Africa, where unions between “native” and “European” people were illegal. He vividly describes his family's struggles, and his own eventual rise to celebrity in the U.S., with frankness and humor (plus some ad-libbed comments you won't find in the written version).

Where the Crawdads Sing, by Delia Owens, narrated by Cassandra Campbell (12 hours 12 minutes)

One of the biggest breakout bestsellers in recent years tells the story of a young girl, Kya Clark, who grows up mostly alone in the wilds of North Carolina, immersed in and fascinated by nature. She's eventually drawn into the world, on her own terms, for love. It's a beautiful novel, with a murder-mystery angle adding suspense.

This clever best-selling 2016 novel has a meh-sounding plot that's anything but, with a memorable main character: the refined Count Alexander Rostov, sentenced by the Bolsheviks to decades of house arrest in Moscow's famous and elegant Metropol Hotel (now drawing tourists who are fans of the book). A cast of colorful characters cycle in and out of the hotel and Rostov's life. The megahit is set to become a TV series starring Kenneth Branagh.

Technically, this scripted comedy from Audible isn't a book, but so what: It's LOL funny, thanks to a fantastic cast led by Saturday Night Live star Kate McKinnon as Queen Mortuana of the Night Realm and Emily Lynne (McKinnon's real-life sister) as her sidekick, plus talent no less than Peter Dinklage and Meryl Streep. The story, involving the Queen's quest to halt a prophecied rebellion, is naughty and irreverent, so don't listen with any kiddos in the back seat.

Spearhead: An American Tank Gunner, His Enemy, and a Collison of Lives in World War II, by Adam Makos, narrated by Johnathan McClain (13 hours 33 minutes)

On the more serious side is this deeply researched, tragic story of a tanker in the 3rd Armored Division that faced epic battles against the Germans. Makos, author of 2012's masterful A Higher Call: An Incredible True Story of Combat and Chivalry in the War-Torn Skies of World War II, calls it “one of the last great untold stories” of the war.

American Predator: The Hunt for the Most Meticulous Serial Killer of the 21st Century, by Maureen Callahan, narrated by Amy Landon (9 hours 3 minutes)

Just out this month, American Predator is about a monstrous serial killer named Israel Keyes, a man who may be lesser-known than Ted Bundy and other notorious murderers, but is just as (more?) terrifying. The Alaskan construction worker spent some 14 years killing people around the country — first burying “kill kits” consisting of necessary tools and cash near his victims for convenient body disposal and escape. Not for the squeamish.

Chase Darkness with Me: How One True-Crime Writer Started Solving Murders, written and narrated by Billy Jensen (8 hours 19 minutes)

This audiobook will grab you from word one. Jensen, a journalist devoted to solving cold cases and the coauthor (with the late Michelle McNamara) of the best-selling I'll Be Gone in the Dark: One Woman's Obsessive Search for the Golden State Killer, describes his own compulsive investigation of unsolved murders, for justice's sake. He also offers tips and encouragement for anyone interested in doing some crime fighting themselves. Note that while it's available now as an Audible Original, the print version isn't out until Aug. 20.

Stories for the grandkids

The Boy Who Harnessed the Wind (not pictured above), Young Readers Edition, by William Kamkwamba and Bryan Mealer, narrated by Korey Jackson (6 hours 35 minutes)

How about an audiobook that will divert both you and the kids? This inspiring true story, recorded for middle school-aged children, is a winner. It's about a boy (Kamkwamba) whose tiny village in Malawi suffered from a devastating draught and went to work building a windmill that would produce electricity to pump water for farming. Netflix released a film version of the book earlier this year starring Chiwetel Ejiofor.

For kids a little younger, it's hard to go wrong with James and the Giant Peach (abridged), Charlie and the Chocolate Factory (abridged), Fantastic Mr. Fox, The Enormous Crocodile and The Magic Finger, Even if you've read the books before, how cool is it to have Dahl, who passed away in 1990, as the narrator?