So many books, so little time — or so the saying goes. But we don't want you to miss these page-turners we highlighted over the past 12 months. Take the opportunity to discover a few of our favorite mysteries, novels and memoirs from 2012. 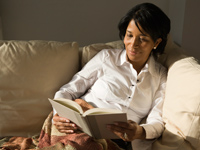 Eight books from 2012 that are on our radar and should be on yours, too.

The Beautiful Mystery
by Louise Penny
$15.87 Hardcover, $12.99 e-book
This smart cozy, a great whodunit about murder among monks in the wilds of Quebec, will get you hooked on Penny's series of eight transfixing books starring Chief Inspector Gamache (so good, says our writer, you may as well start with her award-winning debut, Still Life).

The End of Your Life Book Club
by Will Schwalbe
$16.50 Hardcover, $11.99 e-book
Sounds maudlin. It's not. Schwalbe describes, in a tribute of sorts, how he and his dying mother created their own private book club in her last years. Their story of connecting through a shared love for reading is moving.

Waging Heavy Peace
by Neil Young
$15 Hardcover, $14.99 e-book
He's five decades into a groundbreaking career, and Young's still rocking. This year he came out with a stream-of-consciousness, gut-spilling memoir that takes readers through the highs and lows of his legendary life. We've got pictures.

The Lifeboat
by Charlotte Rogan
$10.99 Paperback, $3.79 e-book
A group of shipwreck survivors is stranded at sea, one of whom is our narrator — a young woman bent on self-preservation. Because we learn in the very first chapter that she'll later be tried for murder, we're on edge until the end of this gripping tale.

The Chaperone
by Laura Moriarty
$17.79 Paperback, $12.99 e-book
It's 1920s New York City, and 36-year-old Cora Carlisle is responsible for the care of future silent-film star Louise Brooks, an arrogant 15-year-old fresh from Kansas who's intent on ignoring Cora's rules and old-fashioned ways. The novel is rich with historical detail of a tumultuous America in the Jazz Age.

The Stonecutter
by Camilla Lackberg
$20.36 Hardcover, $9.50 e-book
If you're missing Stieg Larsson, this may be for you. A small town is rocked by a child's murder, and detective Patrick Hedstrom is charged with untangling the complicated story that leads to the killer. Lackberg, who's been called the Swedish Agatha Christie, has written a notably dark crime novel — even for Nordic noir.

Burial at Sea
by Charles Finch
$10.19 Paperback, $9.99 e-book
Fans of historical mysteries are snapping up this yarn, which features the aristocratic Victorian-era detective Charles Lenox on the case after five British spies have been murdered in Egypt.

Robert B. Parker's Lullaby
by Ace Atkins
$16.32 Hardcover, $12.99 e-book
Though author Robert B. Parker passed away in 2010, PI Spenser is back. Atkins has skillfully taken on the wildly popular detective series, debuting with this story of a street-savvy teenage girl probing the suspicious death of her mother in South Boston.