En español | When in 1996 Steve Jobs suspected DreamWorks CEO Jeffrey Katzenberg of stealing a movie idea from Jobs’s animation studio, Pixar, he got on the phone. Katzenberg offered to delay the production of his film, Antz, if Pixar agreed to delay the release of A Bug’s Life. When Jobs said he couldn’t, Katzenberg retorted: “Of course you can. You can move mountains. You taught me how!”

See also: Secrets of an innovator. 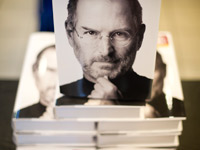 This image of Apple cofounder Jobs as the archetypal entrepreneur who makes things happen pervades much of Walter Isaacson’s biography of the computer mogul, now available in Spanish.

Steve Jobs traces the executive’s rapid ascent from cofounding Apple in 1976 with Steve Wozniak, their initial attempts at raising capital — in which one prospective investor turned them down after deciding they were “a couple of young, scruffy-looking guys” — and the introduction of the Macintosh in 1984.

The Mac was the first commercially successful personal computer with a mouse and a graphical user interface, which allowed users to drag their mouse and “click” on icons instead of typing commands in computer language.

The story of the Mac’s creation sheds light on a darker side of Jobs’s perfectionism and innovation. While acknowledging that the idea of an affordable “screen and keyboard and computer all in one unit” was Apple employee Jef Raskin’s, Jobs decided to carry the initiative to fruition. It was, Isaacson writes, “inevitable that once Jobs set his sights on the Macintosh project, Raskin’s days were numbered.” Shortly afterward, Raskin left Apple.

Recounting these events, Isaacson repeatedly invokes a concept coined by Jobs’s associates to describe his ability to seemingly bend reality to his will. Known as Jobs’s “reality distortion field” — a geek term inspired by an episode of Star Trek — Isaacson tells how Jobs persuaded Corning Glass CEO Wendell Weeks to produce the specific type of glass he wanted for the iPhone despite the massive engineering challenges. “Get your mind around it,” Jobs told him. “You can do it.” And it was done.

But that “distortion field” didn’t always work in Jobs’s favor, as when he decided to postpone cancer surgery for nine months and try alternative medicine. “I really didn’t want them to open up my body, so I tried to see if a few other things would work,” he told Isaacson. By the time Jobs underwent the operation, doctors found that the pancreatic cancer that eventually cost him his life had metastasized.

Jobs’s death at age 56 generated a flurry of eulogies in the media. The innovator was hailed as the intellectual heir of inventors such as Thomas Edison. His loss as head of one of the 21st century’s quintessential manufacturing firms at a time when U.S. manufacturers are losing ground to global competitors seems to have left an unfillable chasm.

While careful not to fall into the realm of hagiography, Isaacson’s book echoes these sentiments, especially when discussing Jobs’s legacy in the final passages of the 630-page tome. “He was a genius,” Isaacson proclaims. Somewhat losing the restraint exhibited in the book thus far, Isaacson concludes that Jobs was “the greatest business executive of our era” and that his “saga” of innovating from scratch is the “Silicon Valley creation myth writ large.”

Eminently readable and thoroughly researched, Steve Jobs is the definitive biography of the computer tycoon — for now. It will probably take more time for the world to process the impact of Jobs and the products he designed and marketed. In the meantime, Isaacson has done an outstanding job of not only retelling Jobs’s story, but also capturing the milieu in which it unfolded.

You may also like: How to ensure you don't lose data on your computer.