“You can change history, Jake,” declares a character in 11/22/63, Stephen King’s sprawling new time-traveler thriller. “Do you understand that? John Kennedy can live.”

In a career spanning nearly 40 years, the prolific master of modern horror has asked us to believe a great deal of outlandish stuff. In 1983’s Christine, a vintage sedan — a 1958 Plymouth Fury, to be precise — went on a killing spree. In 1987’s The Tommyknockers, a long-dormant alien spacecraft unleashed a wave of gruesome chaos. More recently, in 2009’s Under the Dome, a small town in Maine found itself abruptly sealed off from the rest of the world by a mysterious invisible barrier. In each case, King’s disciplined, seemingly effortless storytelling kept these far-fetched tales grounded in reality, making even the wildest flights of fancy chillingly plausible.

Set against these earlier works, King’s latest novel is something of an oddity, not least because the bare-bones idea — a time traveler tries to thwart a presidential assassination — has long been a staple of fantasy and science fiction novels. But if that basic premise feels a bit shopworn, King quickly blows off the cobwebs and makes it his own.

The action begins as Jake Epping, a high-school English teacher in Lisbon Falls, Maine, receives an urgent summons from his friend Al Templeton, the owner of a local diner. Somehow, seemingly overnight, Al has aged several years, lost a frightening amount of weight and contracted a fatal illness. The reason, Al confides, is both incredible and terrifying: In the pantry of his diner he has discovered a time portal, or “rabbit-hole,” that leads to a particular day in 1958. A visitor from 2011 can stay in the past for a few moments or several years, always returning to the present a mere two minutes later. At first, Al confides to Jake, he used the portal for nothing more noble than to buy hamburger meat at 1950s prices. Waking up to the possibilities, however, Al soon set himself a loftier goal: preventing the Kennedy assassination — and, perhaps, a host of other national calamities that ensued. Now, with his mission curtailed by cancer, Al wants Jake to carry on in his place. “If you ever wanted to change the world, this is your chance,” Al declares. “Save Kennedy, save his brother. Save Martin Luther King. Stop the race riots. Stop Vietnam, maybe. … Get rid of one wretched waif, buddy, and you could save millions of lives.”

By slow degrees, Jake overcomes his initial disbelief and agrees to make the attempt, arming himself with a stash of old currency, some phony ID and a shirt-pocket protector. (“In ’58 they’re considered necessary,” Al tells him, “not nerdy.”) Emerging in Eisenhower’s America, Jake must spend five years as a “temporal bedouin,” biding his time as the sweep of history carries him toward Dallas.

The slow build is one of King’s canniest devices, allowing readers to acclimate themselves to the many quirks and contradictions of time travel. Jake uses this enforced waiting period to conduct a trial run, drawing on his foreknowledge of a horrific murder to test whether it’s possible to thwart the designs of a determined killer. The quest takes him to the fictional locale of Derry, Maine, the creepy setting of It and other earlier works by King. Here unseen forces conspire to block him at every turn, and Jack comes to realize that the universe itself is working against him. “But the past is obdurate,” he concludes, “and protects itself against change." 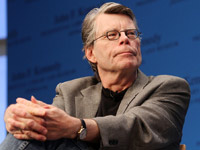 Further complications arise as Jake meets and falls in love with a small-town librarian named Sadie Dunhill, giving the once-detached time traveler a deeply personal stake in the past. As Sadie puzzles over his mysteriously anachronistic taste in song lyrics (“‘She blew my nose and then she blew my mind’?” cries an incredulous Sadie. “Sometimes it’s like you’re from … I don’t know … some other universe!”), Jake realizes too late that the newfound romance poses an unexpected danger to his mission.

It is the measure of King’s artistry that he manages to invest Jake’s personal drama with as much urgency as his mission in Dealey Plaza. Some readers will balk at the novel’s 849-page length, but I didn’t spot a single wasted line. Best of all, King saves his final surprise for Dallas, tying up the multiple plot threads with a thoroughly unexpected flourish. As Jake himself remarks at one stage: “The story was so crazy it was admirable.”

Daniel Stashower is the Edgar-winning author of The Beautiful Cigar Girl.