More is probably known about Ernest Hemingway (1899–1961) than any other creative person who ever lived. In the 80+ years since Hemingway’s genius became clear via his novels The Sun Also Rises (1926) and A Farewell to Arms (1929), armies of journalists and academics, friends and acquaintances have written hundreds of books and thousands of articles tracing his life virtually hour by hour. Hemingway’s family members alone — wives, sisters, sons, grandchildren — have published 10 books about him. Could there possibly be something new to say about Papa?

There could be and there is, as Paul Hendrickson brilliantly demonstrates in Hemingway’s Boat: Everything He Loved in Life, and Lost, 1934–1961. More than any other book I know, this honest yet compassionate work humanizes the legendary writer who created a vigorous new language for American fiction.

Hendrickson focuses on the most public and dramatic period of the writer’s life, starting in 1934, when he bought the sturdy 38-foot fishing boat he named the Pilar. (“Pilar” was the secret nickname adopted by Pauline Pfeiffer before she broke up Hemingway’s first marriage and became his second wife.) The boat became central to Hemingway’s life as he made his home in Key West and then Havana while patrolling the Gulf Stream in search of elusive quarry: giant marlin, German U-boats, privacy and good times with friends. All the while, he continued to write.

The 27 years that Hendrickson has chosen to highlight were turbulent ones, during which Hemingway shed his second and third wives and married a fourth. Critics who had praised his early work turned against him, yet he answered them with For Whom the Bell Tolls (1940), The Old Man and the Sea (1952) and a Nobel Prize in Literature (1954). These were years when, even as his writing faltered, his legend flourished. Hemingway made front-page news around the globe when he survived two plane crashes in East Africa in 1954, but Hendrickson believes the writer “never really recovered in either his body or mind” from his injuries, which included a concussion, damage to his internal organs and a broken back.

During these years, Hemingway’s ego and frequent mean-spiritedness grew increasingly pronounced. Hendrickson abundantly documents Hemingway’s ugly side, but he balances that with glimpses of his better nature. All the usual suspects turn up — frenemy F. Scott Fitzgerald, editor Maxwell Perkins, mentor Gertrude Stein, rich friends Gerald and Sara Murphy — but Hendrickson’s greatest achievement is to have used his journalistic skills to uncover people and stories that other biographers overlooked.

One of these was Walter Houk, who became friendly with Hemingway in Havana in the early 1950s while stationed there as a young American diplomat. The two men met through Nita Jensen, an attractive embassy secretary. Jensen was moonlighting as Hemingway’s part-time secretary when he made a crude pass at her aboard the Pilar one day. She sidestepped his overtures and they emerged as friends. Later, as Jensen prepared to marry Houk, Hemingway insisted on hosting the wedding reception at Finca Vigla, his home outside Havana. A friendship blossomed. When Hendrickson tracked down Houk in Los Angeles 50 years later, the retired widower (by then in his 80s) tapped his sharp memory — and a treasure trove of documents and diaries — to share many insights and anecdotes about the writer. 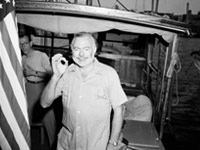 Ernest Hemingway aboard his boat Pilar in Havana, Cuba, 1950.

The most fascinating and troubling figure in the book, apart from Hemingway himself, is his youngest son, Gregory, who was often called Gigi. Growing up, Gigi was considered the smartest and most athletic of the writer’s three sons, but there was a complication: From an early age, Gigi liked to dress in women’s clothing. In time he became a transvestite—an impulse he fought unsuccessfully for the rest of his life, even as he married several times, fathered numerous children, became a doctor and suffered the indignity of frequent arrests for cross-dressing. Late in life Gigi went further still, undergoing a sex-change operation at age 63 in a Colorado clinic from 1994 to 1995.

Many students of Hemingway, Hendrickson included, believe the father-son relationship was complicated by the sexual confusion of the great writer himself, which may have begun when his mother dressed him as a girl in childhood.

Hemingway and Gigi shared a long, painful and angry relationship, yet somehow they always fumbled their way to love and forgiveness. Gigi died in 2001 at age 69 in a woman’s detention center in Miami, where he had been booked as Gloria Hemingway (after first giving his name as Gregory). The Key Biscayne police had picked him up outside the entrance to a state park one afternoon, where they found him confused, possibly drunk and clad only in a hospital gown. Hendrickson presents Gigi as a man who struggled valiantly against his demons. His lonely death, in Hendrickson’s eyes, is a tragedy comparable to Hemingway’s own. The writer killed himself in 1961 after undergoing electroshock therapy for depression.

Through it all, Hendrickson makes clear what a complex mixture of triumph and tragedy Hemingway’s life became. Hemingway’s writing is what finally matters most, but this fine biography makes a strong case that his life was even more grand, more strange and more tragic than his fiction.

Veteran Washington, D.C., novelist, reviewer and journalist Patrick Anderson is the author of The Triumph of the Thriller: How Cops, Crooks, and Cannibals Captured Popular Fiction.