Book club members often have a hard time choosing what to read next — struggling to settle on a title that's not only enjoyable but also lends itself to lively discussion. Here are six new books that have those readable qualities, plus the depth to provoke a great conversation. 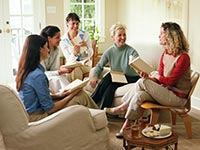 These six books are must-reads for your book club this fall.

Schwalbe's mother, Mary Anne, is a woman who loves books. It is no surprise, then, that her son makes his living in the world of letters and loves reading as much as his mom. When, in 2007, she becomes terminally ill, they begin a "book club" of two and their shared passion becomes a vehicle for the kind of in-depth, courageous conversations most adult children never have with their parents. Together they raise questions about faith, hope and love worth discussing at book club or anywhere else.

Harold is a retired brewery salesman living a drab existence in England with his wife when he gets a surprise letter from a former coworker. He then sets off on foot for an 87-day, 627-mile trek across the country on a compulsive mission to see her one last time. The resulting tale is both funny and heartbreaking. It doesn't feel heavy, somehow, even while bringing up some of life's most profound issues, including faith, marital love and the power of forgiveness.

A lighthouse keeper fresh from the Western Front and his wife, Isabel, are living on an isolated Australian island when they find a boat washed ashore with a dead man and a live baby. Isabel insists on keeping the child, against her husband's wishes, and a few years later faces the consequences of that decision. Readers will have different reactions to Isabel's initial choice — a topic for your group to wrestle over — but few will be unmoved by how impossible her options become.

Next: New books on caregiving, prejudice and secrets. »

The Revised Fundamentals of Caregiving
By Jonathan Evison
$14.36 hardcover, $11.99 e-book

Ben Benjamin is a guy in crisis — he has tragically lost his family and home, though we don't discover how and why until later in the book. Near unemployable, Ben becomes the paid caregiver of a frustrated 19-year-old with a debilitating disease, and their journey together (literally: They take a road trip) is at the heart of the book. Though members of your club may nix this as a downer before giving it a read, it's full of enough humor — the story is told from Ben's wry, self-deprecating perspective — to make you far more likely to laugh than cry.

A Mexican nanny for a wealthy Orange County, Calif., family is left in charge of the two children in her care when their parents' marriage falls apart. She seeks out their estranged grandfather in Los Angeles, where she finds herself mired in the judicial system, and in a situation that grows progressively more disastrous. The novel explores the problems of ethnic prejudice, class conflict and media irresponsibility — all rich fodder for debate. And it's a satisfying read to boot.

A compelling historical novel set in 17th-century England, this book sucks the reader in emotionally — and almost viscerally. John Saturnall is just a boy when his mother dies and he's sent to work in the kitchen of a wealthy estate. Through the years, secrets come to light, a love story unfolds and John's uncanny culinary skills blossom — all described with gorgeous language so evocative you can just about taste his magical sauces and sweets.