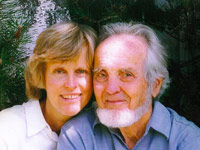 Contrary to our culture's limited views of the elder years, I'm convinced that the last chapter of our lives may be the most heroic of all. We don't know in what form our final challenges will come. The question is, how will we handle what comes our way?

I speak with particular passion about this subject, because I've lived through — and written about — how my husband and I negotiated our journey with Alzheimer's. With this illness, as with many others, how do we learn to live with acceptance and equanimity when faced with the heartbreaks of loss, particularly in the case of dementia? I'd like to share with you a few of what I called our "wisdom treasures," the most valuable insights that came from this poignant time.

First of all, we needed to cultivate the quality of acceptance. Whether partner or patient, surely none of us ever forgets the moment we learned about the possible diagnosis of Alzheimer's. I remember feeling that now there were three of us in our relationship — my husband, affectionately known as "Hob," me, and the diagnosis. There's a caution here: Some people are open about their diagnosis; others never mention it or may not even be aware of it. We need to respect whatever way the person is dealing with their situation.

For us, as spouses or family members, it's helpful to acknowledge that when we resist the reality of our situation, we make life harder. We create suffering for ourselves. This is where cultivating acceptance comes in. Sometimes in particularly difficult situations, I'd remind myself to breathe slowly and calmly, and I'd silently repeat the word "acceptance" to anchor myself during unsettling moments.

Because of our shared background in psychology and meditation, and how both fields involve understanding the nature of the mind-heart connection, Hob and I discussed how we wanted to handle his situation. We didn't want the reality of deepening dementia to overpower us, so we made an agreement to live as "consciously and lovingly" as possible with whatever unfolded. What does "consciously" mean? It means looking with openness and curiosity at mental loss and talking about it from time to time. We actually made a deal that I'd occasionally ask him to give me "reports from the interior." What was he experiencing? For both of us, this meant leaning into the winds of difficulty, facing into the storms of unpredictability even when it seemed the hardest course. As for "lovingly," that meant that love — ours and everyone's — could embrace even the most difficult circumstances, including eventually death.

After receiving Hob's diagnosis, I knew I'd need all the support I could find. I turned to a wise friend, a Tibetan teacher, who had helped me at other critical times in my life. I knew already the benefits of meditation and cultivating mindfulness in daily life, but I had no idea he would offer me the most inspiring teaching for how to deal with what lay ahead.

Strength from a higher source

"Any situation can be a source of growth," he began by saying. "This is difficult, but it is a training, a teaching, a blessing."

He continued, explaining that our situation could also be a healing process in the deepest sense — "that taking care of Hob would become a meditation" for me, that caring for anyone involves the Buddhist practice of the "perfections" — patience, generosity, effort, compassion and wisdom.

These qualities are, of course, honored by all spiritual traditions. In short, he was offering me the highest perspective with which to approach the challenges of a major illness, another wisdom treasure. His inspiring words were like a compass to use to steer through troubled times. He told me that whether we are the person with the illness or the caregiver, we need to be compassionate toward ourselves. To deal with a long-term, ultimately terminal illness, we face Himalayan challenges. It's natural to experience a wide range of feelings — disbelief, anger, dread, sadness, despair, fear and grief. We need to accept that our strong feelings are inevitable, to name them, to experience them fully, and then do our best to move on. Here's where compassion toward oneself comes in. It means being nonjudgmental and gentle with yourself. If you're the caregiver, accept that you are going through a parallel process of your own. You're in new, ever-changing territory and learning how to respond as compassionately as you can. That's a tall order!

Much has been written about support for the caregiver, but there were times when I never felt as though I could have enough support. Such was the enormity of living with my husband's gradual decline. I suspect many of you in caregiving roles will share my feelings. It was a thought-provoking moment when one of my meditation teachers said to me, "Know what your refuges are." Something about the word "refuges" struck a deep chord. What were they? Some of my outer refuges included working in the garden, taking a walk, arranging for respite time to visit a friend, going to my "three sisters" — three majestic white birches in my neighborhood. I could stand in the middle of them, lean back against a sturdy trunk, and just feel the embrace of nature. Something about their silent strength seemed to help my exhaustion. My birch tree sanctuary may seem like a small thing, but isn't it true that often surprising gifts come in the little things — a flower, a child's laugh, raindrops on a leaf?

As for inner refuges, I flew to my computer, sometimes only for a few minutes, to record some episode, or vent my intense feelings in words. Other times I created symbolic drawings, filling an art notebook with wildly expressive renditions of my feelings. My most important refuge, however, was going to meditate in the small room to which I retreated most mornings before Hob woke up. Although not everyone's way, meditation cultivates equanimity, acceptance and calm — as well as understanding for what creates happiness or unhappiness — all valuable for life in general.

Naturally, we also have to know what activities are refuges for our loved one. In Hob's case, he too loved the natural world, sitting outside or going for a walk, listening to music, playing his guitar (which he could still do quite late in the illness), watching golf on TV, looking at family albums — all quieter versions of the activities he'd always loved. Physical contact is always a balm. It can be as simple as sitting and holding a loved one's hand.

Although I don't want to downplay the enormous difficulties of Alzheimer's or my husband's periodical sinking spells over his losses, even difficult situations can be eased by finding a lighthearted element in them. My husband was blessed with a lively sense of humor. He often defused poignant situations, like losing things, with unexpected comments: "I get betrayed by colors," he might say, or refer to "the wily trickster of the physical plane." Or the day he declared, "I feel as though someone's taken the wheels off my roller skates." Invariably he'd break out laughing at his own creations, adding that his "word horde," as he called it, was slipping away.

When dealing with losses, humor might seem like the last possibility, but invariably it eased the situation for everyone. Finding the lightness even at hard times is a remarkable gift, another of those wisdom treasures.

Given how the medical establishment focuses on pathology, I was determined not to be dominated by the weight of an Alzheimer's diagnosis. Whatever stage the person is in, do everything you can to relate to them as they are, not to their diagnosis. If you carry the label "Alzheimer's" in your head, you may end up relating more to your preconceived ideas and expectations than to the reality in front of you. That's like seeing the person through a clouded lens instead of with openness and clarity. Once while being interviewed, Hob declared, "They call it Alzheimer's, but I don't call it anything."

There is great wisdom in his words. Remember, too, that no matter how diminished the mind may be, the person is still there in some way. Perhaps only a shred of consciousness remains, but nevertheless the person still longs to be treated with compassion and love, even if he does not have the words to express it.

Mysteriously, we are given the strength we need to meet the challenges that come our way. Accept that you'll be stretched a lot, sometimes way beyond what you think you can handle. Appreciate the heroic dimensions of what you are living through. In many ways, dealing with any life-threatening illness is a form of initiation, a rite of passage. No one willingly chooses it. Whoever we are, whatever our circumstances, adversity calls forth our endurance, courage and openheartedness. Trust in that. As Rabindranath Tagore says in one of my favorite poetic fragments, "Faith is the bird that sings in the night while the dawn is still dark."