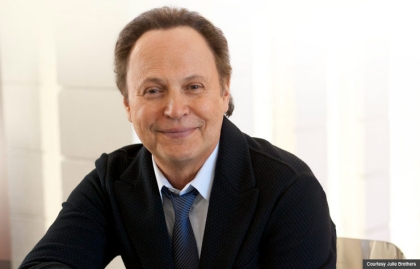 Now that he's 65, Billy Crystal is sharing what he knows.

To mark turning 65 this year, Billy Crystal decided to turn the tables on his fans: He would give them a birthday present.

And as Crystal himself might say, "Whaddya know?" His new memoir, Still Foolin' 'Em, is a gift indeed.

Subtitled Where I've Been, Where I'm Going, and Where the Hell Are My Keys?, the book (Henry Holt, Sept. 10) mingles humorous essays on aging with story-packed chapters recounting the funnyman's rise from stand-up comic to film actor and nine-time Oscar host.

The star of The Princess Bride (1987), When Harry Met Sally… (1989) and City Slickers (1991) took time out from rehearsing for the Broadway reprise of his Tony-winning one-man show, 700 Sundays, to talk about the view from Medicare eligibility.

Q: Most of us have one milestone birthday that proves more ominous than the rest. What was it about turning 65 [on March 14] that made you want to look back on your life?

A: I think it was the suddenness: "Whoa, now — this is getting serious!" But why not be funny about it? I originally thought I would go on the road again as my birthday approached, so I starting writing skits about being older. But as I worked on them, they felt more like essays. Several literary agents thought they might make a terrific book.

Q: You look good. Any beauty tips you can share?

A: I share my life with someone I love [Crystal and wife Janice celebrated their 43rd anniversary in June]. That's a great addition to anyone's life. I try to eliminate stress as much as I can. I do workouts to stay fluid — you don't want to let stuff tighten up. And my four grandchildren keep up my mental flexibility, too.

Q: You do know how to celebrate a birthday. For your 60th in 2008, you got to bat in a Yankees uniform. On your 65th this year, your younger daughter, Lindsay, gave birth to your fourth grandchild, Griffin.

A: Yeah, we were planning to throw this really nice dinner and she said, "Dad, I may not make your birthday party." She was exactly right. At first I went, "Is this going to be good, to share my birthday with this new person?" Now I think I may have my 70th at Chuck E. Cheese.

Q: Most people downsize in their later years, but you and Janice added to your home in the Pacific Palisades to make room for your grandkids to stay over. When was your last grandparent playdate?

A: Yesterday. Hudson [Griffin's 3-year-old brother] called me in the morning and said, "I want to come over." We just hung out. We drew pictures and ran around after each other. It was five hours of not doing anything.

Q: Do you still have that crush on Sophia Loren? [It began backstage after Crystal's third Oscar-hosting gig in 1992, when Loren invited him to "kiss me twice."]

A: I hear from Sophia every now and then. It's always a thrill.

Q: Give me some tips on appearing so at ease in front of an audience. Do you imagine them naked?

A: No, because then I couldn't concentrate! I prepare, but I don't write everything down. I can't really explain it — I just go, and I've been able to do that since I was a little kid. I'm comfortable with a lot of people.

Q: Your pal Robin Williams is heading back to TV this fall. Would you consider doing another weekly series?

A: I'm doing a pilot for a series called The Comedians. It's about a young comedian (Josh Gad, of Jobs) and an older comic working together on a sketch variety show. It reminds me of The Larry Sanders Show — hilarious and edgy.

Q: What's the best advice you ever received about enjoying your golden years?

Susan Wloszczyna is a culture and entertainment writer whose work appears nationally.

Billy Crystal celebrates "65" with a funny memoir for his fans.

The thoughts of Chairman Billy, as distilled from Still Foolin' 'Em: Where I've Been, Where I'm Going, and Where the Hell Are My Keys?

If you're 65, certain conditions need to be just right in order to do the nasty. She can't be having a hot flash. He can't have had too much asparagus. And there can't be a new episode of Homeland on that night.

Take care of your teeth! It's why baby boomers should floss, brush, go to the dentist. Dentists are important people, even if they weren't smart enough to get into med school.

You've got to embrace being a grandparent. It's a sign from God that you've succeeded as a parent. Plus your genetic line will continue, and if you have a good estate planner the government won't get your money.

I can get rid of things that are just objects, that I'm not emotionally attached to (as 70 percent of guys in show business do with their first wives). But the tassel from my high-school graduation cap hangs 10 feet from my work desk.

Too many people try to ignore their birthdays. Why pretend it didn't happen? Every day I'm here, I'm grateful to be on the other side of the dirt.