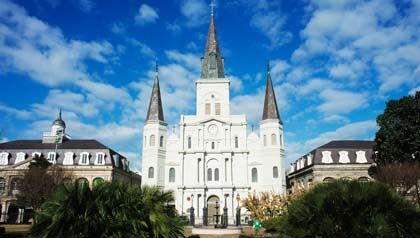 New Orleans is the scene of this year's AARP member event and it's also the stage for many great literary works.

New Orleans has an impressive literary tradition, spawning countless top-notch writers and serving as the colorful setting for classic novels like The Moviegoer by Walker Percy and A Confederacy of Dunces by John Kennedy Toole, as well as Tennessee Williams' play A Streetcar Named Desire. Not to mention the many novels of vampire conjurer Anne Rice. Most of the books below are lesser known, but each, whether fiction or fact, offers a unique slice of New Orleans, making your visit to The Big Easy a much richer experience.

A moody novel set in southern Louisiana that will appeal to lovers of literary fiction, with a good ol' mystery thrown in to boot. It's the 1920s, and our troubled hero is Sam Simoneaux, nicknamed "Lucky," who's working in New Orleans as a department store security guard when a little girl goes missing on his shift. He sets off on a wild search that involves traveling the Mississippi on a riverboat, and a reckoning with his own family's long-ago tragedy.

This book is required reading for those who experience a new place most profoundly through their taste buds. Roahen, a Wisconsin native and chef, offers her funny, personal, weight-loss-defying story of culinary discovery, including where to find the quirky hole-in-the-wall that offers bliss-inducing smothered mustard greens (smothered in fat, that is), why it's a New Orleans tradition to eat red beans and rice on Mondays, and the nuances to ordering the city's iconic po'boy.

A fictional tale of two families, one black and living in the Lower Ninth Ward, the other white transplants from Michigan. Characters wrestle with rebuilding their lives after Hurricane Katrina and the cost of staying in this magnetic but vulnerable city — a place where, as the father from Michigan puts it during Mardi Gras, "you're supposed to dance while you have the chance." The story feels authentic, which doesn't surprise, since Piazza is a true authority on New Orleans, and a rather smitten one: A few months after the storm, he published the nonfiction Why New Orleans Matters, an emotional ode to his hometown.

A Separate Country
by Robert Hicks

$10.40 Paperback, $9.99 e-book
This historical novel will take you way back: Set several years after the Civil War, it's based on the life of Confederate Gen. John Bell Hood, a wildly controversial figure who led his men to bloody defeat in battle. When we meet Hood, he's married and living in New Orleans — "an indecent town," he says — as it's beset with a yellow fever epidemic. The story describes Hood's struggle for redemption, while offering evocative portraits of "that negro section they call Treme," Creole culture and unfettered corruption in a city where "in came the innocent and hopeful, and out went the dead."

It would be hard to find another nonfiction book offering a more thorough tour through 40 years of New Orleans' sometimes-tragic recent history — from Hurricane Betsy in 1965 to Katrina. Baum reveals all the grit and glamour (OK, mostly the grit) of this town through the interwoven true stories of nine wildly diverse residents, including a Mardi Gras king, a philandering gynecologist and a coroner.

This latest thriller in a series starring sleuth Dave Robicheaux begins with the detective foggy-headed in a New Orleans hospital, where he's recovering from a bullet wound. Not one to be bedbound, he's soon up and obsessively investigating the disappearance of a Cajun singer named Tee Jolie Melton. Burke's books are usually steeped in the pungent atmosphere of the city, and this one's no different: At a (rare) light point in the story, Robicheaux's ex-partner Clete Purcel chews through a dozen hot beignets, sniffs the crawfish in the air, and contentedly thinks to himself, "New Orleans would always be New Orleans."