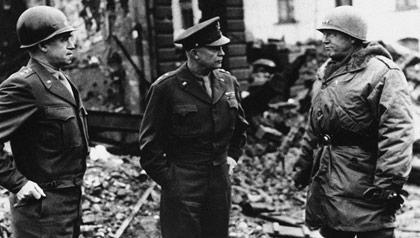 Contrary to popular myths about the inevitability of an Allied triumph on the Western Front in World War II, the surprise German counter-offensive that surged out of the Ardennes Forest in December 1944 was not the desperate gambit of a beaten foe. In fact General Dwight D. Eisenhower, supreme commander of the Allied Expeditionary Forces in Europe, feared the mass attack might well win the war for Germany. He had to figure out a way, and quick, to repel the Wehrmacht in the ensuing Battle of the Bulge, then set the bloodied (and increasingly fractious) Allied juggernaut back on the road to victory.

That dire scenario is just one of the corrective insights that Jonathan W. Jordan offers up in Brothers, Rivals, Victors, his hefty page-turner on the complex, decades-long interplay among America’s top three wartime commanders. In addition to Eisenhower (the savvy political consensus-seeker) there was General Omar Bradley (the painstaking infantry commander) and General George S. Patton (the greatest offensive genius in the history of warfare, according to certain of his peers). Subtitled Eisenhower, Patton, Bradley, and the Partnership that Drove the Allied Conquest in Europe, the book provides fresh perspectives on how the men cooperated between and among themselves. Describing the relationship between Patton and Bradly, Jordan writes, “Their instincts were, more or less, predictable and harmonious, like a pair of temperamental musicians working different instruments to create a surprisingly good melody.”

Surprisingly good for most of the symphony, that is. Mining a trove of personal diaries, new research and contemporary accounts, Jordan shows just how deeply the troika’s professional criticisms, resentments, jealousies and mutual disdain also roiled their days; undermined their genuine comradeship and mutual respect; and complicated their decision-making.

Although Jordan portrays Eisenhower, Patton and Bradley as the principal players on the Western Front, other intriguing characters spur the action as well. British Field Marshal Bernard Montgomery, for one, routinely jeopardized Allied unity, causing Eisenhower many sleepless nights. The Americans regarded Monty as vainglorious and pompous, constantly conniving to use American troops to shore up weaknesses in his own positions. At the same time, however, they acknowledged his devotion to the Allied cause and respected his war record. It was Monty, after all, who had beaten the seemingly invincible German Field Marshal Erwin (the “Desert Fox”) Rommel at El Alamein in 1942.

Eisenhower’s duties as supreme commander were political as much as military (which suited him fine, as his later career would prove). Whenever Patton publicly chafed at what he saw as British timidity — and that was often — Ike had to step in to publicly mend fences. Patton (and many others) believed that quick, deep punches by his armored columns, not Montgomery’s more measured, almost choreographed tactics, should be the cornerstone of the Allies’ combat strategy.

As for Bradley, he was the quintessential field commander — organized, thoroughgoing and loyal to Ike even when his boss overruled him. Somehow Bradley always found a way to get a tough job done. But as the two men’s military careers drew to a close, their friendship cooled; convinced that Ike had made certain battlefield decisions to further his own political ambitions, Bradley withheld his vote for the man in both his 1952 and 1956 presidential campaigns.

Patton likewise had little patience for politics — or politicians, for that matter. In his personal diaries, as Jordan shows here, he brutally criticized Ike’s unfamiliarity with field tactics (Ike had never led troops in battle) and his readiness to placate the Brits. Perhaps Patton should have been more appreciative of those diplomatic skills, for time and again Ike had to save Patton from the political consequences of his rash behavior — most famously the incidents (yes, there was more than one) in which Patton slapped an artilleryman, which Jordan covers in riveting detail.

Readers may find a discomfiting familiarity to Jordan’s accounts of how rigidly senior commanders had to monitor themselves and their subordinates to navigate the minefield of public opinion in countries wracked by war and economic hardship. Parallels also ring in passages detailing the criticism leveled at Patton for his alleged lax enforcement of the denazification of postwar Germany. The idea was to purge all Nazi supporters and influence from German society for all time. But once the enemy had been defeated, Patton saw National Socialism as “just another defrocked political party” whose supporters would move on. A similar quandary gripped post-Saddam Iraq, where supporters of the U.S.-disbanded Ba’ath Party indeed moved on — to guerrilla warfare.

Jordan’s otherwise compelling tale could have been magnified by some narrowing. Revealing anecdotes pile up, yet often they illustrate the same point. Still, it’s easy to understand the author’s temptation to include so many stories: The interactions among Eisenhower, Patton and Bradley were many and varied, and in Brothers, Rivals, Victors Jordan has fashioned a surprisingly timely group portrait of three men juggling the shifting degrees of rivalry and camaraderie brought on by the burden of protecting their country at a time of grave national peril.

Bill Lenderking is a current freelance journalist and former Foreign Service officer. He previously reviewed A Girl’s War: A Childhood Lost in Britain’s WWII Evacuation for AARP The Magazine Online.