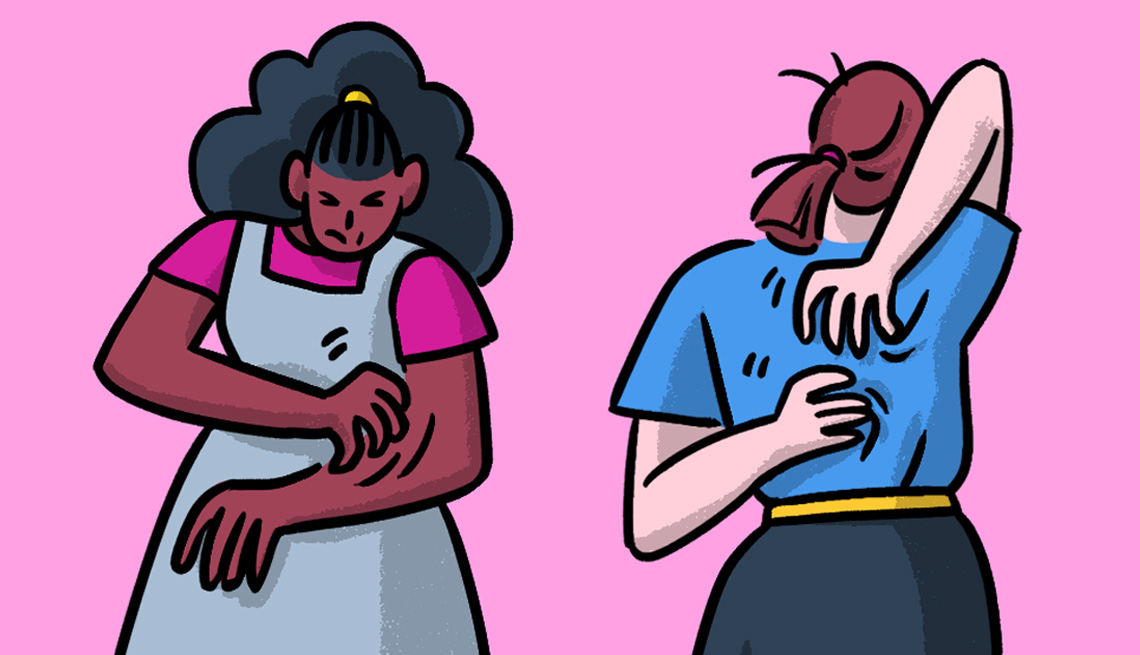 This may be cold comfort when you're scratching that one spot on your back and debating the pros and cons of tearing off your skin, but ... it's not just you. As they age, women are especially prone to irritation of nerve endings. “Itchiness increases with age,” says Adriana Schmidt, a California-based, board-certified dermatologist and spokesperson for the Skin Cancer Foundation. “Our skin is drier overall, and it's just harder for our bodies to fight it off.”

That means the usual culprits such as a wool sweater, a chemically enhanced new soap, hives or a persistent mosquito bite are not to blame.

In fact, Schmidt notes that at least one-third of her bothered patients are dealing with a rash-less problem stemming from the nerves called neuropathic itch. “It's common on the back around the bra line,” she says. “It means that you've had some posture changes that compress the spine, and on top of that, your skin is dry. So, a little branch of nerves gets fired up pretty quickly.” And if you're not fired up learning that, keep in mind that there are several other underlying reasons that itch persists. These explanations may not soothe your skin, but they may ease your nagging mind. (Just be sure to talk to your own dermatologist for more information and effective treatments.) (And don't scratch!)

You already know that entering menopause generates all sorts of hormonal changes because of decreased estrogen and progesterone levels. Not only does this cause lowered sex drive, insomnia, night sweats, vaginal dryness and a decrease in bone density (sigh), skin usually feels like sandpaper. “Hormones normally stimulate the oil glands,” Schmidt explains. Without the built-in moisturizer, skin becomes unhappy and irritated.

Histamines are chemicals produced in cells throughout the body that act like a bouncer at a club in that they hustle annoying allergens (i.e., something that makes you itch, sneeze or tear up) right out of your skin. They're an integral part of your body's defense system. (When these histamines overreact, an over-the-counter antihistamine such as Benadryl or Allegra reduces or blocks these chemicals and makes you feel better.) However, “there's a decline in histamine reactivity when you age,” Schmidt says. “So it's harder to fight itch.”

Carefully read the pharmacist papers that accompany your medications. “Some medications can cause itch without rash and it occurs more often in older patients and those on multiple medications,” Schmidt says. She adds that prescription pain-reducing medications containing opioids (including codeine, oxycodone and fentanyl) commonly cause itching because the narcotic binds to receptors in the nervous system that activate itching.

Dry skin is characterized by a lack of oil-producing glands in your body; dehydration is a lack of water. And like those diminished oil glands, “the skin's ability to retain water declines with age,” Schmidt says. Alas, not even drinking eight glasses of water a day may offer relief because “dehydration is related more to the ability of the skin to retain water, which acts as a barrier function, as opposed to the consumption of water.” The fallout? Itchiness galore — even in warmer, humid weather when your skin is typically more moisturized.

There's a mental component as well. Fact is, it's easy to keep your mind off a stray body itch when you're preoccupied with your career, the house or the kids during the day. When one or more of these issues are stripped away and you become less busy (which usually happens in the golden years), you have more time to focus on body issues. “You're less distracted,” Schmidt says. That's also why people of all ages scratch more at night or in bed. Sweet dreams — and fragrance-free creams — may do the trick.

For a wide variety of tips and tricks to stop itching, go here.