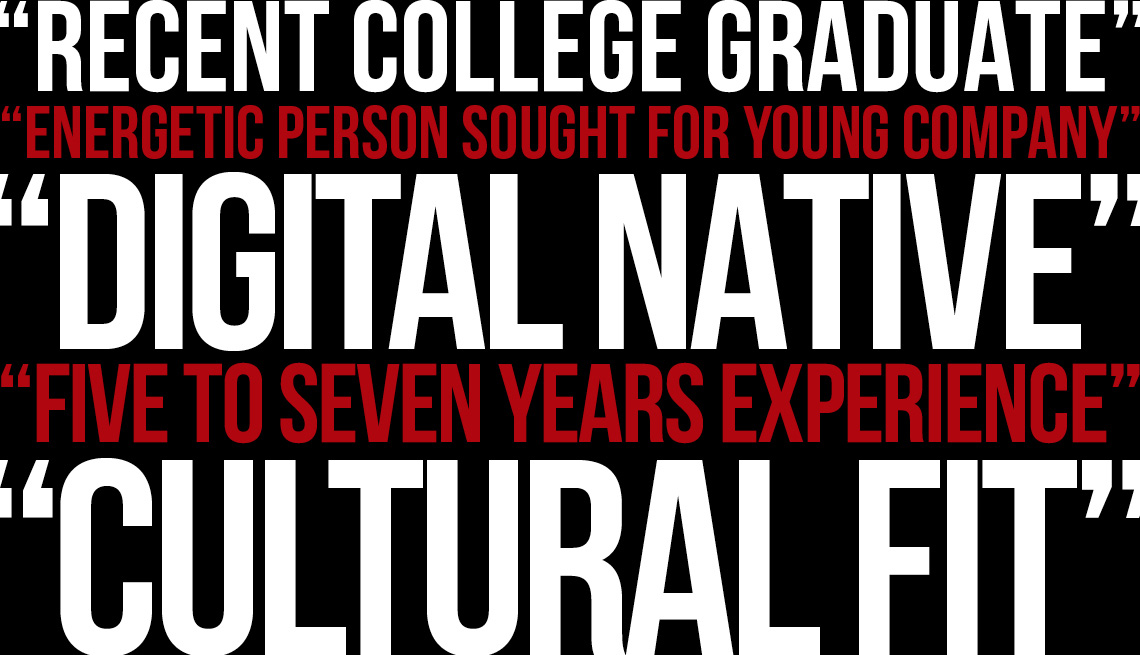 As British politician Pearl Strachan Hurd once famously said: “Words have more power than atom bombs.” And some words — even those spoken without a harmful intent — can wound mightily.

Take, for example, the recent Project Runway show where the term “old lady” was tossed around liberally as a synonym for fashion that is out of date — that is, a bad thing. It was repeated so often that a 77-year-old retired professor of architectural design could barely stand it. Carolyn Dry got so mad that she called friends, the show and agreed to talk to the Washington Post.

But putting aside hurt feelings, the damage that occurs when age is equated with desirability is tangible. Take job ads, for instance. Despite protections by the Age Discrimination in Employment Act of 1967 (ADEA), employers have gotten cleverer in masking what is age discrimination:

Under the ADEA, employers aren't allowed to say they want a recent college graduate when they post a job. Some might argue that anyone of any age could have recently earned a college degree, but the law is the law and companies run the risk of being afoul of it on this one. And let's face it: The vast majority of recent college grads are, in fact, in their 20s.

One reason we still see this language is that no office of the federal government routinely checks the ages of those who get hired and those who get passed over for a job unless there is a complaint filed. How's that working out for older workers? Not so great, especially in the tech sector. A Statista report put the median age of a Facebook employee to be just 28 years old; Statista also reported that 54 percent of Facebook's U.S. users are over 35.

Employers may seek a recent college grad because they want someone to work for cheap. It's unfortunate that they think this is limited to the pool of recent graduates. Many out-of-work midlifers would jump at the chance for a job that came with health benefits, regardless of whether the pay is less than what they previously earned. And boy, wouldn't they just swoon if the job came with a 401(k) corporate match!

While we are at it, who do employers think taught all those recent college graduates?

A digital native is someone who was born with a cellphone in their hand. OK, slight exaggeration there. The term was coined by Marc Prensky in 2001 and used to describe the generation who became comfortable with technology at an early age. Common wisdom puts that as folks born in 1980 or after.

More to the point, asking for a digital native in an ad reinforces the myth that older people aren't comfortable with technology. It's the “old dog, new tricks” thing. And it's bogus. Pew Research found that older people may have been later to embrace technology, but once online, they embraced it fully.

What these ads are really doing is sending the message that they don't welcome older applicants. They shouldn't assume that an older person wouldn't be interested or capable. Can you image a job ad that said the company was seeking someone who was “white” or “heterosexual?” If that's not OK — and it's not — it is equally not OK to say you want to hire someone who is a digital native.

Some companies say they are trying to cultivate a certain corporate vibe. They want to hire people who would work well with existing staff — an admirable goal — but in cases where the median age is young, this often results in assuming that an older worker will feel out of place.

When a corporate culture is based around socializing with coworkers and employees are expected to work long hours and then play together, it can exclude workers who have family obligations and need to rush home.

While it seems innocuous enough on its surface, “cultural fit” is a standard that historically masks discrimination. It harkens back to when a black applicant wouldn't have been a good cultural fit because they likely wouldn't be admitted to the country club or come from the same colleges as white applicants.

Civil rights laws presumably changed a lot of that, but now the same standard is being imposed regarding age. Having a workforce with a range of ages shouldn't be a bad thing. It should be a goal, and that's not bound to happen if everyone hired is at the same stage in life and brings the same sensibilities to the job.

By careful wording, this job posting stays just on the right side of the law. The company is young, not the applicant being sought. The applicant just has to be energetic.

Does it fool anyone? The message is clear: Older people need not apply.

"Age cases would not be age cases if not for the vast number of creative ways employers refer to employees as old. Seems like there is no limit to how employers — and society — refer disparagingly to older people,” blogged Fox Rothschild LLC, a law firm in Philadelphia.

The case the firm was discussing involved a 76-year-old security guard in Missouri who claimed he was fired because of his age. His supervisor had told him that he “needed to hang up his Superman cape.” In other words, it was time for him to no longer work — because of his age.

Sometimes, the blatant age discrimination is well, blatant. Companies have flat-out advertised that they are looking for someone young. “High energy level” is often used as a euphemism for “young,” playing off the stereotype that older employees lack energy.

There have been recent cases that argued job advertising for new employees with five to seven years of experience shows the intent to recruit relatively new graduates. This phrase deters those who have more experience from applying.

The EEOC says setting a minimum experience level is fine, but it must be open-ended. So “looking for someone with a minimum of three years of experience” is fine. But restricting it to those with less than seven years is not.