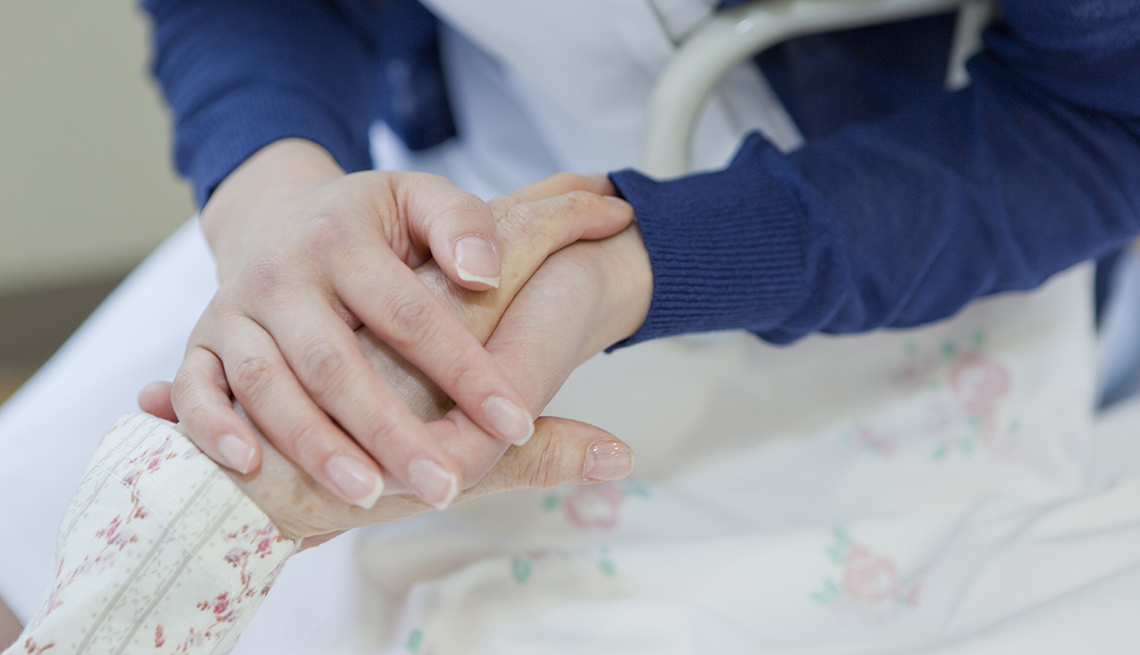 En español | I am a secret caregiver.

I'm a caregiver because I care for my aging mother; secret, because no one knows she is fighting for her life.

Like many immigrant Asians from an earlier generation, the word “cancer” strikes fear. It's bad luck to even say the word.

You would think that since my mother went to medical school, she could speak openly, candidly and rationally about it, and she can — when it's someone else's. Friends seek her medical advice, but she still has not told anyone outside of her primary caregivers (doctors and children) that she herself is preparing for chemotherapy after many surgeries and different types of radiation treatment.

Becoming a caregiver was a sneaky process for me. It began with minor tasks: helping with some translations, making doctor's appointments and dealing with the pharmacy.

Then she realized there was something serious going on, but she would only drop hints cryptically in Mandarin Chinese, such as “wǒ juédé yǒudiǎn qíguài” (我覺得有點奇怪), ("I feel a little strange.") After several months of my trying to understand what was happening, I got frustrated and angrily demanded that she allow me to accompany her to her next doctor's visit. She argued with me for a while before she finally relented.

Her doctor (also her medical school classmate) took one look at me and said in Chinese: “nǐ de māmā bù tīng wǒ de huà” (你的媽媽不聽我的話),  ("Your mother doesn't listen to me.") He showed me test and biopsy results, lab reports and images that were startling even for someone like me, with no medical background.

"Please,” he pleaded with me in English so that I would understand the gravity and urgency of his words. “Please help your mother schedule her surgery. I gave her a referral months ago, and it's still not done. I didn't know what to do other than to ask you to come in.” Out of exasperation, he had asked her to bring a family member to the next appointment. Mom hadn't relented to my badgering, but to her doctor's. Sometimes when I can't sleep at night, I wonder if she would have ever told me if it hadn't been for him.

It was probably this appointment I would point to as the day I became her caregiver, but it wasn't until months later — after countless doctor visits, a major surgery, an unexpected hospital stay and a pathology report confirming she had cancer — that it dawned on me. This responsibility was mine and not going away. The epiphany came as I was creating a new shared calendar between us so we could better manage her appointments and medications.

I now realize that my mom knew on some level she had something serious. After all, it was she who discovered the suspicious lump. It was she who demanded the labs and tests showing something to be concerned about. Yet as the facts flooded in, her training switched off and her humanity switched on: Fear overtook her, and she was too emotionally paralyzed to follow her own advice.

A couple of years ago, I became a parent. I took on the role of caregiver for an infant with joy and eager anticipation. Little did I know that pretty soon I would be (much less joyously and not-at-all eagerly) caring for my mother as well. I unwittingly became a member of the sandwich generation: responsible for bringing up our own children and caring for aging parents.

I sometimes joke that it's easier to care for a 2-year-old than for a 72-year-old, but it's actually the truth. For one thing, you just can't make an adult do what you want her to do. For another, not only are there various options for child care, but others know how hard it is and offer to help. When your mother doesn't even tell her sister or best friend she is sick, the burden of care (and worry) falls squarely on you.

It falls on me, her secret caregiver.

I let my mom tell her friends she spends so much time with me because she is helping out with my toddler. And while that is true some of the time, one look at our secret shared calendar would tell you that the bulk of our time together is for her health care needs.

Months flew by and my life changed dramatically to revolve around my mother instead of my child or my career. The words “self-care” hadn't entered my mind because I was always worried about “mom care” or “baby care” first.

One day, while I was waiting for my mother at the cancer center, I noticed a poster for a weekly caregivers support group meeting. I surreptitiously scheduled my mom's next physical therapy session for the same time.

At the first session, I was grateful that I didn't recognize anyone. I felt my burden being lifted as I walked into that room. I told my secret to strangers whose experiences were so similar that they did not feel like strangers at all. Listening to their stories made me realize that while my specific journey is unique, I am never alone on this path.

The biggest piece of self-care I gave myself was permission to talk about my situation with specific friends. These people outside my extended family and my mother's social circles allow me to talk openly while honoring her wishes for privacy. Many people assume that when you get bad news, you should tell people — people you love and who love you so that they can support you. My mom comes from a generation and culture where bad news is kept close so that others aren't needlessly hurt by it. She doesn't want support from outside because she is used to being strong for herself.

Sometimes one must protect someone else's secret out of respect — as well as out of love. Sometimes a secret is unwelcome, festering like a cancer. Sometimes its cure is simply to uncover it.

This story is a winning essay from the AARP and AAJA Caregiving Contest. Learn about contest and the other winners >>

* Chris Lee is a pseudonym used to protect the identity of the writer's mother.