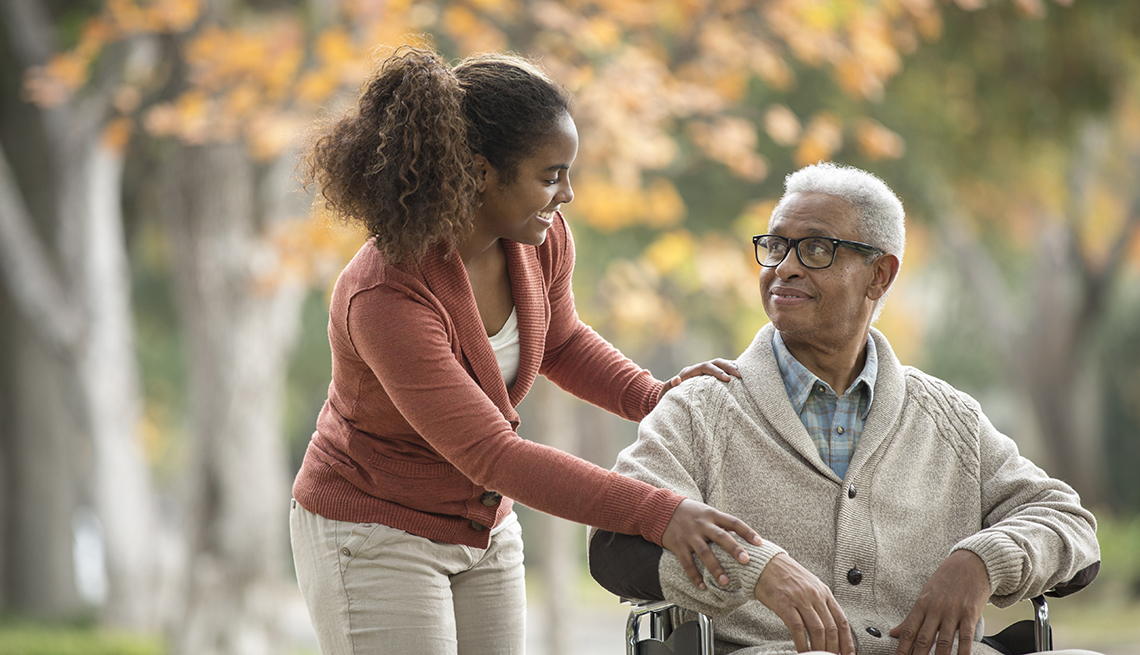 Statistics show that more than 10 million millennials in the U.S., who range in age from their early 20s to late 30s, are acting as unpaid caregivers.

En español | There’s a pretty striking point that can be made about caregiving: No matter who you are, at some point in the future, you’ll either be a caregiver or need one.

I suppose the saying could be amended to include the phrase provided you live that long, but the point remains: caregiving, and the eventual need for it, is just about as close to a certainty as one can find in life.

If that sounds a little overdramatic, it’s not intended that way — it’s just a statistical likelihood. Just ask the more than 40 million people in the U.S. who are already serving as unpaid caregivers, most often for an aging parent or a grandparent. And with the 65+ population in the U.S. set to nearly double over the next generation, caregiving will only become an even more pervasive issue.

Of course, caregiving is nothing new — it’s been going on since the beginning of time — but it seems to touch each successive generation a little differently. The latest affected is the millennials, who range in age from the late 30s down to the early 20s. Perhaps that sounds a little young to be a caregiver, but it’s not. Statistics show that more than 10 million millennials in the U.S. are acting as unpaid caregivers — that’s one quarter of all unpaid caregivers in the U.S.

With that in mind, Millennials: The Emerging Generation of Family Caregivers, a new study released by AARP, takes a look at how the caregiving equation is playing out in the lives of millennials and shines a light on the path forward.

Among the report’s most notable findings:

Time — On average, millennials spend 21 hours per week on caregiving duties (i.e., just over half the time that constitutes a full-time work week) and nearly three quarters of them (73 percent) do it while also working a job.

Talking (or Not) — Compared with older caregivers, millennials tend to keep it to themselves: only 19 percent discuss their caregiving duties with coworkers vs. 47 percent for older caregivers. And fewer than half of millennial caregivers (46 percent) mention their duties to a supervisor, which may be a reflection of the fact that 54 percent say their work or career prospects have been negatively affected by their caregiving commitments.

Money — Perhaps most pressing is the cost of caregiving. Of the more than 1,200 millennial caregivers surveyed, the average respondent reported spending $6,800 per year (of their own income) on caregiving expenses (e.g., food, supplies, home modifications.) Compounded with the mounting student debt that is common for many millennials, the already profound challenges posed by caregiving can add financial pressure to the lives of caregivers.

Join me in the discussion about caregiving on Twitter, @JoAnn_Jenkins

OK, so where do we go from here? Given the intersection of caregiving and employment, clearly, employers have an important role to play.

For us, it’s working well. Employees in good standing with pressing caregiving needs — i.e., ones that cannot be integrated with their working life — are able to apply for leave that, when granted, doesn’t leave them in a hole financially or, worse, find them squeezing through yellow traffic lights in an attempt to get to work or to a relative’s home on time. Employees who have used the program tell us it’s a great relief of stress and, counterintuitive to taking them “away” from their work at AARP, actually results in them being more engaged in their role in our organization and our overall mission to serve people age 50-plus.

While there are various studies that can help organizations calculate the “return on investment” from caregiving leave programs, sometimes the value of such things is difficult to calculate. You do it because it’s the right thing to do or because it’s something the times require. In the case of caregiving, here at AARP we find that both considerations apply.

I’m hoping this column can help advance, or at least contribute to, the discussion of ways employees and employers can work together to find workable solutions to the caregiving conundrum now and, increasingly, in the future. While there are compromises to be made on both sides, like many significant challenges the path forward can likely be found in reminding ourselves all that we have in common.

With its borderless, touches-just-about-everyone dynamic, caregiving has a funny way of doing that.

Jo Ann Jenkins is CEO of AARP. She is the author of Disrupt Aging, now available in paperback.