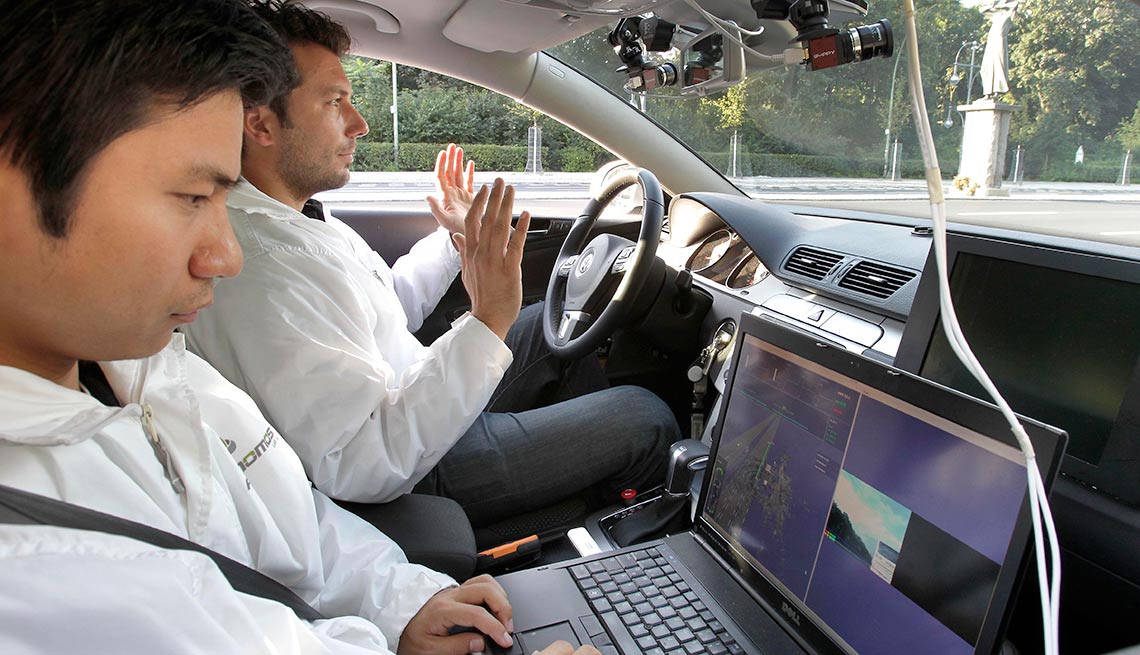 Some autonomous driving features are already available for consumers, and many more are still being tested.

En español | The recent news that General Motors and ride-sharing company Lyft aim to put prototype driverless taxis on the road within a year accelerated interest in driverless technology once again. It seems that every few weeks the road to the driverless future gets a little shorter: There are reports that Tesla, whose Model S already includes what the company calls "semiautonomous features," has plans to release a fully autonomous car, perhaps as soon as the turn of the decade. And there have long been whispers that Apple is conducting hush-hush work on an electric vehicle that would eventually be autonomous, as well. It's colloquially dubbed the iCar, of course.

The driverless-car chase isn't new. A host of huge companies, including Google and major car manufacturers, have been angling for pole position for more than a decade. What they're all chasing will fundamentally change auto transportation, transferring most, and eventually all, driving responsibility from humans to computers.

Save with the AARP Auto Buying Program. Discover How!

Whenever we arrive at the driverless future (there's disagreement about when but not if), it could be important news for older drivers, who stand to benefit more than most. Poor eyesight, slowing reaction times and other aging effects often force people to hand over the car keys and find less convenient modes of transportation.

So what, exactly, is a driverless car? How much will older drivers really benefit? And how realistic are the time frames?

First, a clarification: Driverless vehicles, in the short term, won't actually be driverless. Humans will still be required. If you imagined lounging in the backseat of your car as your robot driver takes control up front, think again. In fact, the automobile industry doesn't want to call the vehicles "driverless" at all. It prefers "autonomous" or "automated driving" cars, and for now those terms are more accurate, as the first wave of technology (some of it already available) functions more like an autopilot mode on an airplane.

"We still see the driver being at the center of the driving experience," says Randy Visintainer, Ford Motor's director of autonomous vehicle development. "That's the focus of what we're doing."

So what, exactly, is a driverless car? How much will older drivers really benefit? And how realistic are the time frames?

In autonomous driving, the car's computer — working with sensors, cameras and other technical wizardry mounted around its frame — takes over from the driver and performs certain tasks. Many cars now on the market offer options such as parking assist, which automatically parallel parks with limited input from the driver, and driver alert, which gives a warning if driving patterns indicate drowsiness. Backup cameras, collision warning systems, blind-spot monitors and lane-keeping technology are also fairly common now.

These incremental advances in autonomy are available on cars in all price ranges, and Visintainer says they can be especially important for older people, as they can relieve much of the anxiety associated with driving at an advanced age.

But Bryan Reimer, a research scientist at the MIT AgeLab who specializes in driver safety issues, says that for such autonomous features to really benefit older drivers, the drivers need to feel comfortable and safe using them.

"Many autonomous features have the potential to help older drivers stay in the vehicle and comfortably drive for longer. However, there are significant limitations," says Reimer. "Is the driver capable of engaging with these technologies safely? How do we trust these technologies?"

Reimer points to tests that AgeLab has done with older people using a parking-assist feature, which he calls a "wonderfully developed piece of technology."

"People get in there, they take their hands off the wheel, and they're scared," he says. And even though after a few tries, most love the feature, Reimer says many older drivers may not use such technology without being pushed to do so.

"The driver is going to remain responsible and in control for the foreseeable future."

The next wave of autonomous control, which includes vehicle-to-vehicle communication and traffic-jam assist, will require the driver to trust the systems even more. With traffic-jam assist, for example, if you're crawling along on your morning commute, you can hit a button and let your car take over while you sip your coffee.

Adaptive cruise control is becoming more widely available, as well: Since 2014, Mercedes-Benz S-Class models have featured Steering Assist, making the car capable of fully steering itself in certain highway conditions. When the steering assist is active, it doesn't require input from the driver, but in order for the system to work, the driver's hands must remain on the steering wheel. If the car senses the hands aren't on the wheel, the system returns to manual control. For turns, drivers are also required to take over. BMW and Infiniti are among the luxury manufacturers that now offer similar features.

Long before most manufacturers warmed to the "driverless" concept, Google embraced it. The search engine giant has been at work on a self-driving car since 2004. Pushed by its lobbying, several states — including Nevada, Florida, California, Michigan and the District of Columbia — have passed legislation approving driverless cars on roadways.

As of May 2016, Google cars have clocked more than 1.5 million test miles, and though someone sits at the wheel, the driver is hardly required. The car maneuvers its way using sensors, lasers, a 360-degree camera mounted on top and GPS integration. All the human has to do is sit there. Accidents have been rare and mostly involve fender benders attributable to drivers of the other vehicle (read humans). In February, the first accident caused by a Google self-driving car was reported in Mountain View, Calif., when the vehicle hit a bus traveling at low speed while trying to maneuver around roadwork.

The accident was another reminder that there will be bumps in the road. In any case, Google says that its research focus is primarily on improving driver safety and that it has no plans to start producing and selling cars. Google reps have said they expect completely driverless technology to be available within the next decade, and though the company gets credit from the industry for pushing the innovation into the public consciousness, that timetable isn't realistic, according to Reimer. "We're decades off," he says, noting that the numerous complex obstacles — regulatory and legislative, to say nothing of matters like insurance standards, driver education and infrastructure — remain in the way.

"The driver is going to remain responsible and in control for the foreseeable future."