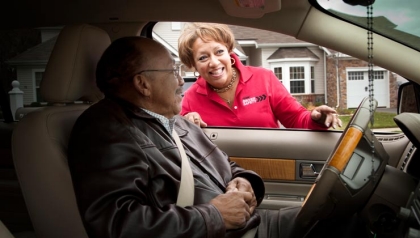 Penny Corum, 61, of West Orange, learned to drive from her father, John Henderson. She's one of about 150 volunteers who teach the AARP Driver Safety course to about 10,000 New Jersey drivers each year.

"It's something he always stressed with me," Corum said.

Four decades later, the 61-year-old retired West Orange resident is a volunteer instructor with AARP Driver Safety, and she passes her father's lessons on to those taking the class to help improve their own driving skills.

Henderson's decision years ago to take the course led Corum to also enroll and eventually become an instructor. "He started to realize he was becoming distracted as a driver," Corum said of her dad, now 84 and living in Absecon in South Jersey.

The realization that a person's driving skills aren't what they were 50 or even 30 years ago leads many older people to attend the six-hour class, said Lavelle Jones, 59, the program's deputy state coordinator. About 10,000 drivers enroll in 500 to 600 sessions offered statewide each year, she said.

AARP Driver Safety classes are open to any licensed driver, but the material is geared to the state's nearly 3 million residents who are 50 or older.

The class shows how physical changes associated with aging affect driving abilities. It also offers strategies for navigating urban and country roads, as well as keeping a safe following distance — at least three seconds behind.

"Many of the participants who come to our course haven't had a driver refresher course since they got their license, which could be 40 or 45 years ago," said Jones, who's been with the program almost seven years. "It's designed for folks who've been driving for some time."

Next page: When and how to "have the talk" with older drivers. »

The roughly 150 volunteer instructors also stress the importance of being aware of what other drivers on the road are doing and offer tips for staying safe in adverse conditions. If it's snowy or icy, for example, fall back more than three seconds from the vehicle ahead, Jones said.

And if your car starts to skid in inclement weather, the correct response is also the one that may seem counterintuitive: turn the wheel in the direction the rear of the car is skidding, then steer — gently — in the direction you want to go.

Another segment of the class presents participants with ways to assess their driving skills and determine whether it may be time to limit or stop driving altogether.

Warning signs include forgetting where you're headed while behind the wheel, Jones said, or thinking, "I have no idea where that car came from."

To help adult children of older drivers evaluate a parent's driving skills and have a discussion about options, AARP offers a free seminar called "We Need To Talk" to deal with this sensitive topic.

AARP also hosts CarFit events that allow older drivers to make sure everything from their car's mirrors to the seat are properly adjusted. Participants drive their own vehicles to a CarFit session for a free 20-minute, one-on-one assessment of any adjustments that would help to make driving safer.

Greg Saitz is a freelance writer and photographer based in Madison, N.J.