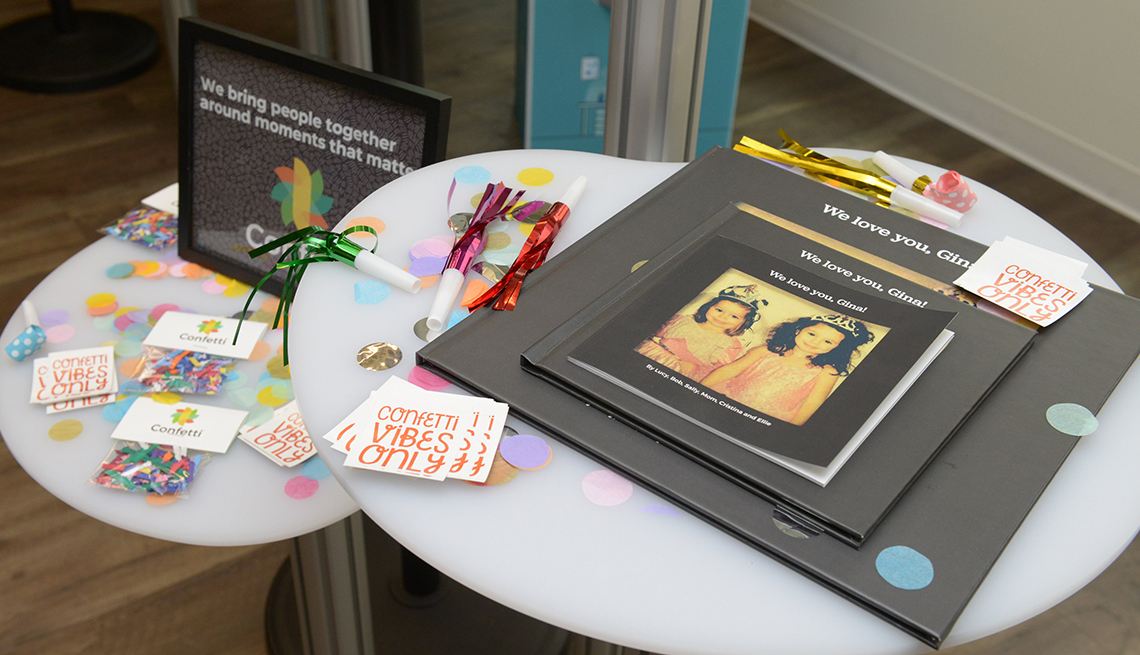 Innovation isn’t always about creating something never done before; sometimes it’s about improving an existing concept for a new audience. That’s true for Confetti, AARP’s new digital tool that makes it easy to compile photos, text and other content and transform them into photo books and slideshows. What makes Confetti unique from other photo book companies is its ability to gather content from a whole community of people all in one place.

“It’s all about bringing people together around moments that matter,” says Alanna Ford, who leads Confetti at AARP Innovation Labs. Early users are coming to Confetti to mark milestones like big birthdays, anniversaries and weddings.

The process is definitely easy: To create a gift using Confetti, you contact the special people in the recipient's life — friends, family members, neighbors — and ask them to upload photos, messages or memories. As soon as you accept the submitted content, Confetti will create a photo book and a digital slideshow that you and your loved ones can share. Confetti is also very affordable, with books starting at $15, including free standard shipping up to 100 pages for the flat rate.

Ford explains that the idea for the product began by asking, “How might we help women who are 45 to 65 live their most fulfilling lives?” The team eventually decided to concentrate on social connection, she says, “because it’s at the core of what it means to live well and age well.”

After interviewing women around the country and testing different concepts, they came up with Confetti, and began testing it in May. A new version of the product that’s even easier to use will be released this December.

Confetti will continue to evolve and expand. The team is planning a pilot program where families of residents at an assisted living facility will be given the chance to create Confetti photo books for their loved ones. Ford says there's evidence that residents receive better quality care, and in turn experience better health outcomes, when their caregivers know them and their histories on a deeper level. The Innovation Lab is also working on a virtual reality version of Confetti, where words and pictures could come alive through a VR headset.

Regardless of format, Ford emphasizes, “Confetti is about bringing together the most important people in someone’s life to show their love and create something special.”