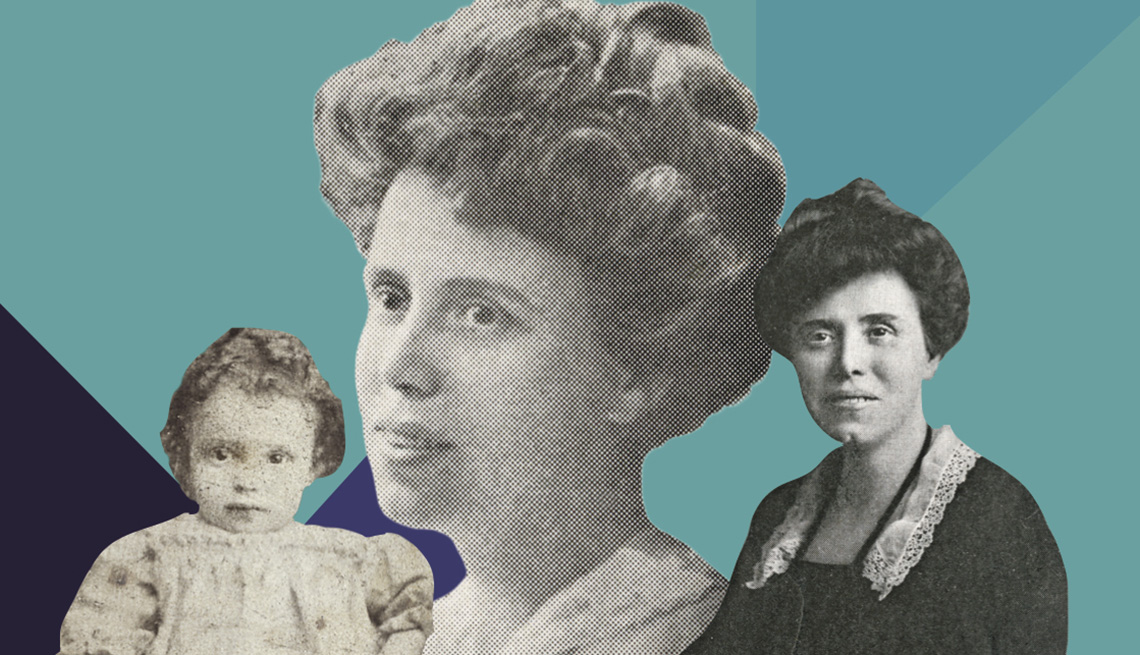 Ethel Percy Andrus was born in California and made a difference in her home state — and nationwide.

En español | Ethel Percy Andrus was born in the 19th century and helped transform the 20th. The indomitable woman who would go on to found AARP was born in San Francisco in 1881 to parents who instilled in her and her older sister, Maud, a love of learning and a progressive spirit. Those characteristics would drive her throughout her 85 years, from her days as a young teacher and a high school principal to later in life, when she made it her mission to improve the lives of older Americans.

When Andrus was 5 years old, her parents, George and Lucretia, moved their young family from California to the Windy City, where George attended law school and the girls began their own schooling. It was a tumultuous time — the famous Pullman Strike of 1894 threw Chicago into chaos after federal troops crushed the railroad workers’ uprising — with vast gaps between the Gilded Age millionaires and the poor. As a young girl, Andrus was moved by those at the top who tried to spread the wealth: She revered the late Peter Cooper, a wealthy industrialist and inventor turned philanthropist who founded a New York college offering free night classes to everyone, regardless of race or background. What made a great impression on her, she said later, was “his love for, and service to, folks whom he might never have known.”

Andrus was among the very few women who went to college in 1900. She spent a year at the University of Chicago before joining a teacher training program at an affiliated school, the innovative Lewis Institute on Chicago’s near-West Side. After earning a four-year degree in 1903, she immediately joined the faculty and taught English and German there for seven years — a busy, exciting time for the young teacher.

While working at the Lewis Institute, she discovered Hull House, a settlement house cofounded by the heiress Jane Addams. It was located in an impoverished neighborhood where immigrants (Italian, Irish, German, Greek, Bohemian, Russian and Polish) could find support and a place to live. Hull House offered night-school classes for adults in subjects such as English and citizenship. Andrus volunteered there and, she would later recall, “I learned there to know life intimately and to value folks of different races and creeds.”

She remembered her time in Chicago as “happy and wonderful,” but that part of her life came to an end in 1909, when she and her father grew ill (records don’t specify the nature of the illness). The family moved — temporarily, they thought at the time — to a small town in Southern California, Santa Paula, so the two could recover. Andrus rebounded, but her father grew worse. He was diagnosed with atrophy of the optic nerve, a progressive disease.

A passion for teaching

The family ended up staying in California, and Andrus eventually took a job teaching English at Manual Arts High School, a new school for working-class students in the growing new metropolis of  Los Angeles. In 1916, she became the principal of Abraham Lincoln High in East Los Angeles — and the first woman to run a major urban high school in California. She oversaw a diverse, multilingual group of more than 1,000 students and worked hard to encourage an enthusiasm for learning and the kind of welcoming atmosphere she’d seen years before at Hull House.

One of the first things Andrus did as principal was to have the word “opportunity” spelled out in big letters over the entrance gate.

She whipped up enthusiasm for sports programs, offered a range of social activities and clubs, and transformed the curriculum to be more relevant to students, with vocational classes in addition to the more traditional subjects. And because she wanted to inspire their parents as well, she opened a hugely popular Opportunity School, where the adults could take evening classes.

She’d go on to earn a master’s degree from the University of Southern California and a PhD from USC’s School of Education. Then, at age 62, after 28 years as Lincoln’s devoted principal, Andrus resigned: Her mother was ill (her father had passed away long before). Her colleagues were surprised and dismayed when she announced her resignation but, she explained, “My mother needs me now.”

While caring for her mother, she remained involved with teachers’ welfare issues — concerned that the meager pensions they received, an average $40 a month, left retired professionals “without adequate funds to keep alive, much less to live in dignity.”

When her mother recovered, Andrus was again ready to serve the public. This time, she’d focus her energies on older people — a decision that her mother, then in her 90s, eloquently supported, Andrus recalled, with these words:

“I have been thinking a great deal lately about old age. Old age, Ethel, needs care as youth needs care, but it needs something more. It needs the desire to live, to continue planning and striving hopefully, to keep working at something worthwhile, and then when, at last, old age becomes dependent, it needs someone to still care or, if there is no one to care, there should be community care, which can make it easy to help those who now cannot help themselves to keep their dignity and their self-respect.”

So, now in her mid-60s, Andrus launched herself onto a new career path — one centered around improving life and expanding opportunities for older Americans.