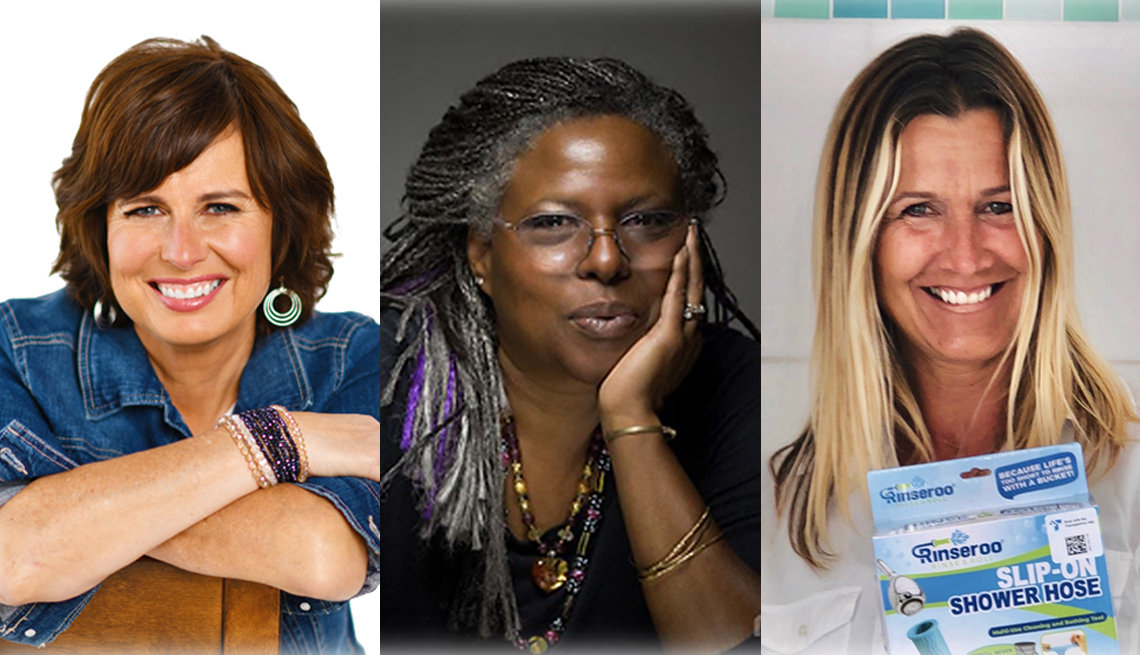 En español | Great ideas are everywhere. And when you happen upon that combination of inspiration and ability, you may have a successful business idea. Here are the stories of how three online entrepreneurs built their businesses.

Cleaning up with a great idea

Lisa Lane was enjoying a family beach vacation with her family. There were 15 of them in all, plus their dogs. And she was sick of all the cleaning.

That's when she came up with the idea for Rinseroo, a faucet and shower head attachment and hose, which would allow her to better direct the water and make everything from washing pets to cleaning the bathtub easier. She and her son worked on building a prototype from their Clarksburg, New Jersey, home base, making multiple trips to the hardware store to try out different hoses and connectors, she says.

She learned about an engineer in New Hampshire from a book she read and reached out to him. “My prototype was a really rough, functioning thing, but it worked,” she says. “He was able to create drawings that showed me it could work.” The engineer also introduced her to a manufacturer in China that could make the product.

Lane decided to sell Rinseroo as a third-party seller on Amazon. The platform would fulfill her orders, which freed up time and head space that she could use to grow the company. Then, she learned about the Amazon Launchpad, a program that showcases innovative products by vetted startups. She knew she had to have at least five reviews with at least a 3.5 star rating to apply. She was accepted and her sales took off even more. Choosing a third-party platform gave her access to a much broader audience and has let her sell far more product than if she was trying to do everything on her own, she says.

Matters of the A.R.T.

Jewelry has been part of Anne Renee Timmons-Harris's life since she was a child. When she was growing up in Chicago, she would visit her family's landlords in their home across the hall. The wife collected Venetian glass beads, which entranced Timmons-Harris. In that apartment, she also learned how to string and knot beads. Timmons-Harris took a jewelry-making class in high school and continued to learn more about human history, including jewelry and beads, throughout college and into adulthood. Later, she took a home study course from the Gemological Institute of America on grading diamonds.

Timmons-Harris was an early online entrepreneur. She registered her website — beadbear.com — in 1998 and, within a few months, sales were coming in. Through the years, her business evolved as tools became more sophisticated. Now, customers can browse pieces online and place orders seamlessly. Timmons-Harris handles all the order fulfillment herself.

Today, Timmons-Harris's A.R.T. Precious Collectible Jewelry reaches customers using its website and social media platforms. Timmons-Harris has built a broad network that includes clients and suppliers. She posts information about jewelry history and stones on her social media channels, sharing her interest in the craft of jewelry-making and her love of vintage beads and semiprecious stones with the world. She helps people learn about the stone properties and “how cool rocks are,” she says. “It's just about: Does it make your heart sing?"

Looking back, working in college financial aid seems to have been Catherine Graham's destiny. When she was a student at the University of Redlands in Redlands, California, she was a campus tour guide and overnight host, talking about admissions. Her first job was in college admissions at the University of Southern California, where she went to graduate school. Roughly 18 months later, she was asked to work in the financial aid office. “I call that my ‘black and blue’ period,” she quips, because it was so challenging. But she fell in love with helping students pay for college and hasn't looked back.

After working for institutions such as Whittier College and Loyola Marymount, she decided to take her experience to a broader audience. In 2017, she opened the Financial Aid Shop in Redondo Beach, California, to consult with both colleges and universities and families. She promotes her various services through her website and launched an online component to her business last year, selling spots to attend her virtual workshop. It took about a year to get the program up and learn how to promote it. “As an entrepreneur and as a solo-preneur, there are so many things that you have to do, and learn on your own. Oftentimes, it can be overwhelming,” she says.

In launching her business, she says she worked closely with her local Small Business Development Center. Her coach helped her develop the idea for an online program, she says. “I tested it by teaching the course in person at my local adult education center. And then from there, I put the program online,” she says. Her consulting revenue has allowed her to invest in developing the family consulting side of her business, she says.

For those with specialized expertise, Graham says that turning knowledge into a consulting business can be a lucrative and satisfying endeavor if it's something about which you're passionate. “I don't believe that students need to borrow money to go to college. I want our students to graduate in four years. And so just any opportunity I have to share my message is really what I'm trying to do,” she says.