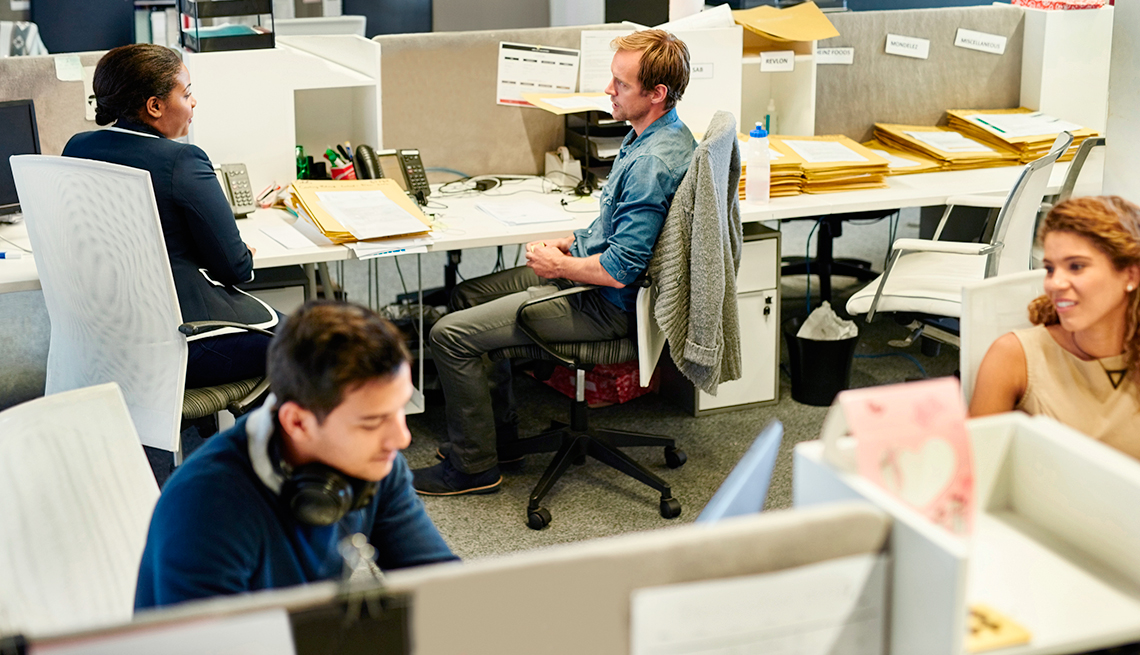 Things can get real when coworkers share an open office.

For many office workers, privacy is a luxury of the past. More than two-thirds of employees now work in offices with limited or no dividers between them and their coworkers, according to the International Facility Management Association. For experienced workers used to closing an office door for some much-needed quiet time or one-on-one meetings, this shift toward openness can require patience, an alteration of some long-ingrained work habits and, sometimes, a new pair of noise-canceling headphones.

When Dan Lyons, 56, a writer based in Boston, changed jobs and moved from a private office at Newsweek to an open workspace at software company HubSpot, he was miserable. Employees at HubSpot moved desks every few months to foster new relationships. "It was an incredibly disorienting system," he says. In addition to the distracting noise of people's conversations, he says, colleagues left smelly food messes in their wake. Lyons documented much of his unhappiness, which went far beyond the office floor plan, in his book Disrupted: My Misadventure in the Start-Up Bubble.

Lyons left his job after a year and a half and now works largely from home. He says that most office workers will need to adapt to the new open layouts because they aren't going away. "The main reason companies like to go to open-office areas is cost — it's cheaper," says Alan Hedge, a professor of economics at Cornell University.

Given the small size of computers compared with those a decade ago, it's easier for workers to fit themselves, and their technology, into smaller workspaces, Hedge explains. "Why do I need to give you a huge, big desk when you're just putting a teeny-weeny laptop on top of it?"

Millennials, Hedge says, also appear to prefer open workspaces for the social aspect. "The workspace is an extension of their social life, and the last thing they want is to be isolated in an office with a door." Open workspaces can also make it easier for companies to foster intergenerational relationships and mentoring, he adds.

Hedge points out that research is mixed on the question of whether an open workspace improves or impedes productivity. While the answer depends partly on the office culture and type of work being done, it also depends on how the space is organized. The companies that transition to open offices successfully, he says, take care to create plenty of quiet areas for more focused work as well as separate "coffee" areas for people to casually meet and talk.

If you are facing a move to an open workspace, here are seven do's and don'ts from those who have found ways to make the new layout work for them.

1. Try to nab a quieter spot, away from foot traffic. If your workspace is closer to the bathrooms or kitchen, then you'll probably be pulled into a constant stream of conversations, warns Peter C. Diamond, an executive coach in Chicago. When he worked at an advertising firm that switched to an open floor plan, he claimed a spot at the end of a row to help minimize distractions. "It made the transition easier for me," he says.

2. Schedule quiet time. Diamond got in the habit of blocking out 8:30 a.m. to 10 a.m. on his calendar every day for uninterrupted time, and then moved his laptop to a quiet spot or used headphones to help him focus. He let coworkers know not to ask him nonurgent questions during that period.

3. Get out of the office more. If you're an introvert or otherwise struggle with being next to people all day long, Diamond suggests going for a walk or getting coffee to give yourself mental breaks. Suggesting a coffee date later in the day can also be a way to redirect chatty colleagues when you're trying to focus, he adds. If a coworker comes by to talk while he's trying to get something done, he asks if the person is free to talk at a different time.

4. Use texts, instead of phone calls, to communicate with family. Personal calls in the middle of the workday can be distracting to those sitting nearby. So Kelly Ronayne, 53, who does business analysis and forecasting at the Motley Fool, an online media company in Alexandria, Va., texts with his family if they need to reach him during the day.

5. Keep fish in the kitchen area. Eating something particularly pungent just feet away from a coworker can be distracting at best. Ronayne says most people eat in the office kitchen area, which contains plenty of seating, or at local restaurants. It's not taboo to eat at your desk, but it's generally more considerate to keep odoriferous foods away from work areas.

The same policy goes for other personal behavior. If you're in an open workspace, take care of any hygiene needs, such as clipping nails or applying makeup, in private areas like bathrooms. If anyone forgets to follow this rule, the office manager can send out a general reminder about protocol.

6. Invest in high-quality headphones. When he worked in a loud room filled with people making sales calls, Lyons purchased noise-canceling headphones, which he placed over a second pair of earbuds that pumped music or white noise into his ears. "I was sitting there in a weird cocoon," he recalls. "Listening to Mozart's Requiem, looking at a room full of people talking, it felt like I had been transported to Dante's Inferno." Still, it helped him concentrate.

7. Be patient. Ronayne moved to the open workspace at the Motley Fool four years ago, after working for a variety of companies (including AARP) that had more traditional offices. He says 80 percent of the adjustment to the open floor plan happened quickly, as he learned to tune out distractions, which include coworkers occasionally shooting Nerf guns at one another. Now, he says, he loves the openness of his workspace. Compared with home, which is full with family life, it's a calm oasis, he says.