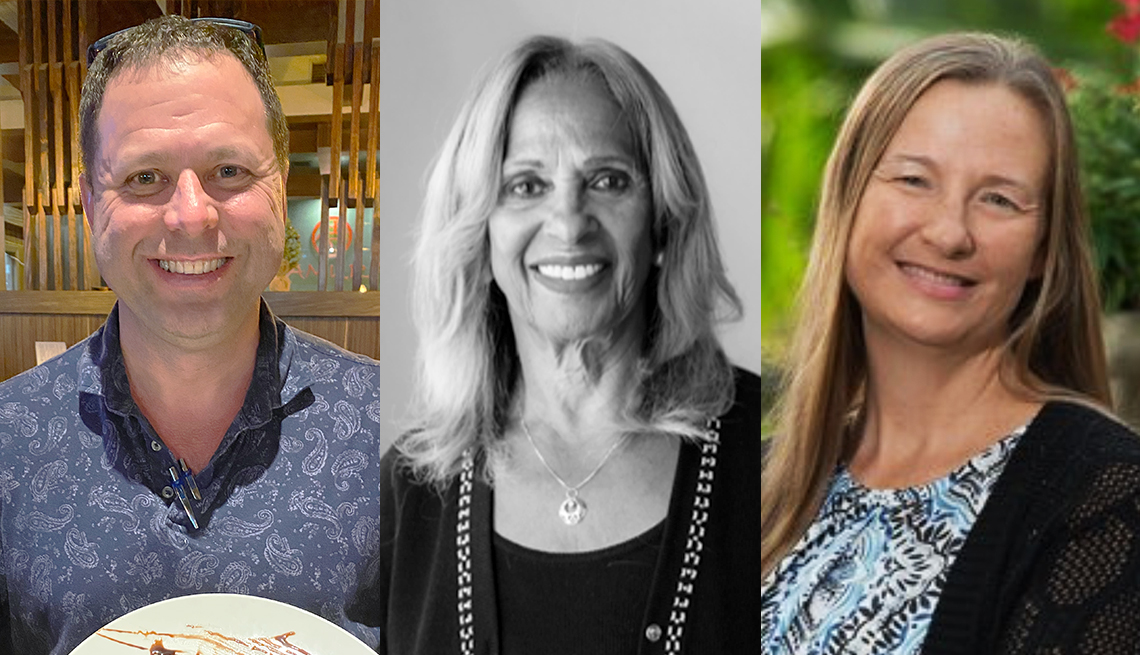 After 20 years serving in the Air Force, Julie Chickery was working as a project manager for a government contracting firm. It was the kind of stable career so many strive for after being in the military. Then, one day, her husband, who was two years away from his own 20-year anniversary in the Air Force, walked into the room and asked if she wanted to move into a recreational vehicle (RV) and travel around the country.

"There was a podcast about these people — the husband had been in the Navy, and they were retired and living in their RV — and my husband was just thinking, I think you could still do it and be working,” she recalls.

Over the course of six months, the couple sold their possessions, bought an RV and hit the road. About two years later, Chickery decided that if she was making such a big lifestyle change, she should change her career, too, merging this way of life with how she made a living. For a few years, she had written a blog about healthy eating. Through that project, she had learned about how to make blogs profitable. She created one about RV life, then began doing speaking engagements around the country at RV shows and rallies. While on the road, she had found the path to a new career.

The traditional narrative goes something like this: You prepare for a career, work hard, then reach some pinnacle after you've achieved goals, eventually retiring in that field. But, due to the ways the workforce and the economy have evolved, that linear progression is changing. Instead of sticking with one field for most of their working lives, many midcareer professionals are making big career shifts. According to a 2019 survey by Indeed, roughly half (49 percent) of employees surveyed said they had made at least one total career change.

What motivated them to do so? The top reason (88 percent) was to make more money. But career switchers had other strong reasons, as well. More than three-quarters made the change because wanted to either continue learning and moving forward professionally or because they no longer felt satisfied in the field they were in.

Whether you're considering taking on a new role in the same industry or, like Chickery, switching careers entirely, be sure you're doing it for the right reasons, says Dawn Graham, author of Switchers: How Smart Professionals Change Careers and Seize Success, who is also director of career management for the University of Pennsylvania's Wharton School executive MBA program. Shifting careers is a big undertaking and may bring setbacks in addition to triumphs. “I think it's really important to run to something versus running from something,” she says. When you're unhappy in your job, everything may seem appealing, even if it's not right for you. But if you truly find something you want to embrace, you'll be ready to stick with it, she says.

Significant career transitions typically aren't overnight stories. According to Indeed's research, those who changed careers took roughly a year to complete the switch, on average. However, they could easily take longer, depending on the endeavor. And that exploration phase is important, Graham says, because sometimes those tempting new roles are not all they appear to be. Some people find, “'It's really not what I would have expected it to be,’ and, ‘Hey, maybe there's something closer to what I was doing before that has some of the qualities that appealed to me about this job,'” she says.

Sometimes the changes come from necessity. After decades in finance, Shaun Gilley left his job as a financial analyst in a Fortune 500 company when his wife landed her dream job in Ocean Springs, Mississippi. As he looked unsuccessfully for a job in finance, his mother-in-law suggested he look into teaching. “I hadn't thought about this at all,” he says. But, as he began to investigate, he was intrigued. Mississippi had a program with an “alternate route” to a teaching license. He began working in the field and, after a year, he was eligible for a permanent license. He also earned a special education certification and found he loved teaching biology classes, so he earned a certification in that area, too.

Sue Taylor's motivation for starting a second-act career was more dramatic: Her son had talked to her about the idea of opening a cannabis dispensary in California. The former Catholic school teacher, now 73, who had always taken a dim view of marijuana, packed her bags and left her home in Georgia “to save him from drugs,” she laughs. “I packed up bags for two weeks, and it was 10 years before I went back.”

Take a little bit of time to think about how much in your life actually revolves around your career, because you find out that [your career] actually ends up being a lot more than just pay.

To learn more about the business her son wanted to open, Taylor began working at the cannabis retailer Harborside. She got more involved in the community and learned more about how cannabis can help some people with various issues like chronic pain and insomnia. Taylor decided she wanted to be personally involved in launching the dispensary her son planned. Farmacy Berkeley opened its doors in February 2020 in conjunction with Glass House Group. Taylor now helps in everything from product development to sales and public outreach. She's even a commissioner on aging for Alameda County and is certified to teach continuing education courses about cannabis to medical professionals.

Even if the perfect opportunity doesn't immediately crop up, there are plenty of ways you can explore new opportunities — and how they connect with your strengths and skill set — online, says career coach Andy Hillig. Online assessments and tools like Gallup's CliftonStrengths (formerly StrengthsFinder 2.0), Discovery's Discover Your Skills, or Your Next Move can help you start thinking about your strongest traits and abilities, which may help you think of ways to move your career in a new direction.

These tools can also give you insight into weaknesses you're going to need to address. Hillig says that if you plan to start a “small businesses or consulting practice, is one of your strengths managing finances or not? Because if it's not, and you're going into business on your own, you know that that's going to be important.”

Meeting the challenges head on

Anticipating obstacles is another important part of preparing for a new career. No assessment or amount of planning can prepare you for all of the hurdles. And, even then, it might be years before you fully replace your income, if you ever do. Chickery says that her four-year-old speaking and writing business still hasn't reached the income level she enjoyed as a project manager for a military contractor, but it's growing. And Gilley says he now makes about a third of what he earned as a Fortune 500 financial analyst. So it's important to consider what your financial life will look like during and after the transition, Graham says. Chickery is making the financial aspects of RV life part of her business and is developing an online course to teach people about how to budget and make money while on the road.

Gilley says that, though his new career is satisfying and has allowed him the time to exercise his entrepreneurial interests, getting used to a new way of working has been a challenge. For example, when you work in an office in finance, you can leave the office when you need to do so. As a teacher, he has less flexibility, which has been an adjustment, he says: “If I want to run an errand, I probably can't do it.”

Chickery was also surprised at how much her identity was connected to her previous job, she says. “Take a little bit of time to think about how much in your life actually revolves around your career, because you find out that [your career] actually ends up being a lot more than just pay,” she says. “Sometimes it's the self-esteem factor, sometimes it is a social factor.” It's a good idea to do an assessment of the rewards you get from your job, both personal and professional. “Because it doesn't have to deter you, but you'll want to identify ways to fill those holes,” she says.

And, of course, the COVID-19 pandemic created unexpected challenges for all workers. Chickery's speaking engagements, which represent a large portion of her income, vanished almost overnight. Farmacy's doors closed a few weeks after its opening, and it had to find new ways to serve customers, including curbside pickup and delivery. And Gilley says that the transition to remote learning was a challenge unlike anything he had faced in his jobs previously.

For career shifters who do the homework, find the right fit and overcome the challenges, the rewards can be enormous. Chickery now has two businesses related to the RV life that she loves. She says she has traveled many places and met people from all over the world.

Gilley enjoys working with his students and finding ways to help them grow. He enjoys the one-on-one approach and helping children who struggle with learning find their way, he says. And, in addition to finding a fulfilling new career, he has also launched two ecommerce businesses: NurtureChi, an energy bar company, and Coffee Enlightenment, a website about coffee. He says he would not have had time to launch these enterprises when he was working in finance. In addition to providing additional revenue, the businesses allow Gilley to use the finance skills he honed over decades.

And Taylor has become a celebrity in the cannabis business. Known as “Mama Sue,” she is considered a trusted voice and advocate for medical cannabis use among older people. And while, at first, she worried about being an African American woman in the cannabis field, her spiritual side prevailed. She told herself that she wanted to make the world a better place, and she believed this was the way to do it. It took more than five years for her to become a staunch cannabis advocate, but she says she's seen many people whose lives have been changed for the better by it.

And that's perhaps the best possible outcome: By taking a risk to find a new career, not only did each find a more fulfilling path, but they are helping others as they pursue their own dreams.

In One Year, Pandemic Forced Millions of Workers to Retire Early

From flight attendants to grocery store managers, older adults made the tough decision to end careers