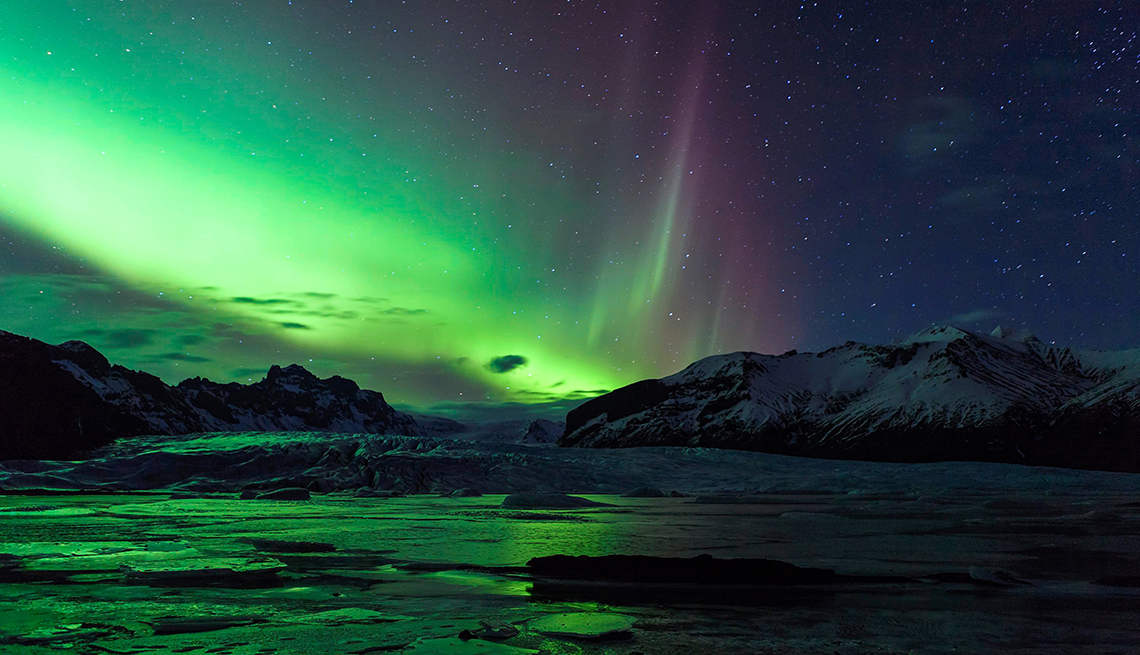 The northern lights over Iceland

En español | It's 1 a.m. in Churchill, Manitoba, and I'm swathed in so many layers of wool, down and high-tech clothing that I can barely move. The temperature is 44 below zero: It doesn't matter whether that's Fahrenheit or Celsius; the scales meet at 40 below. I should be dancing around for warmth, instead I'm lying on frozen tundra watching ethereal green, white and rose lights streak, shimmy, swirl and shimmer in the night sky.

It seems like everyone has seeing the northern lights, or aurora borealis, on his or her bucket list — for good reason. They're awesome. But the truth is, even when taking a themed tour or visiting a location renowned for sightings, there are no guarantees. Clouds might mask the lights, or they may not appear. You can increase — but never ensure — the odds of success by understanding what they are and where and when they are most likely to appear.

Where: The action occurs in the auroral oval centered over Earth's north pole, and can be observed more than half of the nights of the year between the north and south latitudes of about 60 and 75 degrees. Good sighting spots include parts of Alaska, Greenland, Iceland, Canada, Norway, Sweden and Finland. Maximize your chances by choosing a rural destination far from city lights and staying at least three nights.

When: Generally, the best opportunities occur from late September through March. Clear, dark nights are ideal, with the optimal hours usually between 10 p.m. and 2 a.m.

Tip: When chasing this elusive show, choose a location or an itinerary that offers daytime diversions as well as fallback options for cloudy nights. That way you'll enjoy a memorable vacation, lights or no lights.

Here are some special ways to experience the phenomenon (rates are per person and subject to change):

Churchill, Manitoba, edges Hudson Bay and lies beneath the auroral oval. Frontiers North Adventures transports guests via Tundra Buggy across the frozen Churchill River to its Thanadelthur Lounge, located far from any light pollution. Warm up inside until the show begins, then head to a rooftop observation deck or out on the frozen tundra for viewing. The weeklong tour includes three nights in Winnipeg, four nights in Churchill, meals and daytime activities including dogsledding, snowshoeing and museum visits.

Hurtigruten offers a 12-day coastal cruise round trip from Bergen, home to a UNESCO World Heritage Site (its 14th-century Bryggen district), to Kirkenes, nine miles from the Russian border. You'll see countless fjords and mountains and 34 ports of call — and the cruise line is so confident you'll see the lights on cruises from October to March, they promise to give you a free six- or seven-day cruise if you miss them.

Greenland Tour's Hearts of the Inuit small-group (2 to 8 people), seven-day adventure in Disko Bay includes four nights in the western coastal town of Ilulissat, known for its colorful houses and famous Icefjord, plus transport by snowmobile and dogsled. Tour options include sailing past icebergs and snowshoeing under the northern lights. Greenland is gaining in popularity as a tourist destination but still rather remote: You'll need to fly into Ilulissat from Iceland or Denmark. The company notes that you are most likely to see the northern lights if you schedule your visit between the end of August and the end of March.

Rates: from about $1,500, including accommodations and some meals

Lapland-based Aurora Service Tours began life as an aurora forecasting company. Now it also offers tours in which you stay in a private cabin with a full kitchen and sauna, prepare your own meals and join 12 to 16 other guests seeking the lights at night. Rates include aurora chasing, winter outerwear and airport transfers, with a stop at the supermarket. Snowmobiling, snowshoeing and dogsledding excursions are also available.

Get the perfect shot on a Lights Over Lapland photo tour in Sweden's Abisko National Park. It includes lodging, locally sourced and traditional meals, nightly excursions to different aurora-viewing locations, camera and related equipment, arctic overalls and guide. At least one daytime activity, such as snowshoeing or dogsledding, is included.

Location, location, location: The Northern Light Inn is sited within the Reykjanes UNESCO Global Geopark, surrounded by the Holocene Svartahraun lava field, near the Blue Lagoon (the hotel has free shuttles there), and only 20 minutes from the airport. It's even located on Northern Lights Road. You can wait for the lights in the hotel's viewing tower, then step outside for the show.

Rate: from about $240 per night, with breakfast