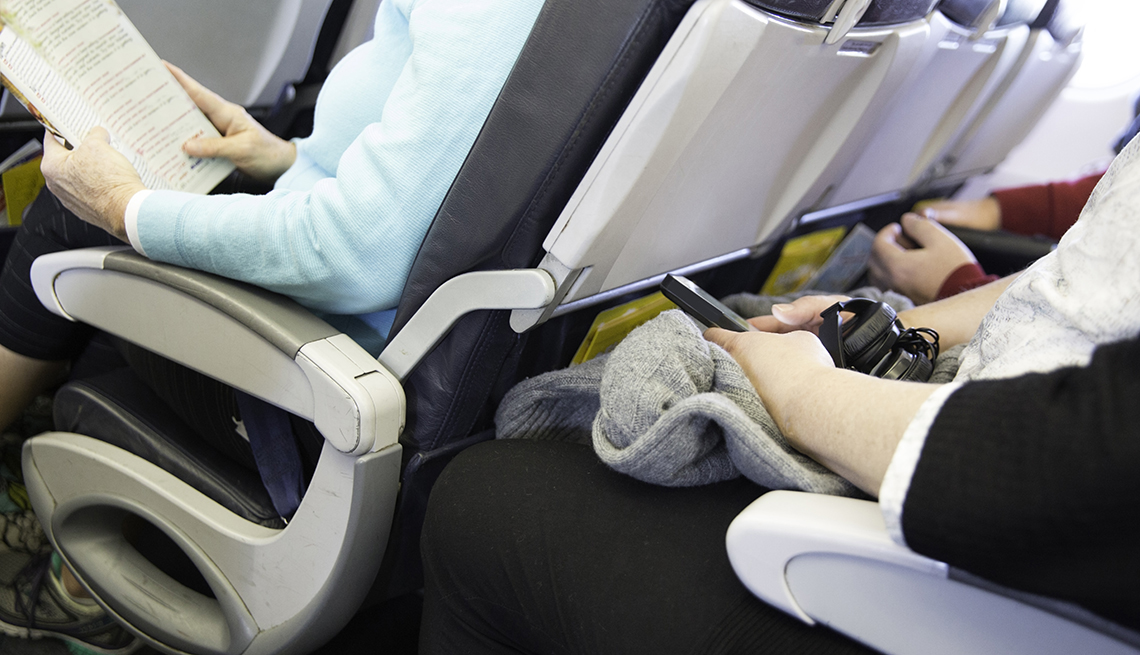 A new law that requires airlines to set a minimum size for seating was signed by President Trump on Friday. The “Seat Egress in Air Travel (SEAT) Act,” part of the Federal Aviation Administration Reauthorization Bill, gives airlines a year to set a minimum for seat width and the space between seats.

But no one is expecting the industry to boost passengers’ personal space by much. It might simply make today's tightly packed seating the official minimum.

It's a bad combination: Americans are bigger, seats are smaller. Airline seat widths have dropped from around 19 to 20 inches in the mid-1980s to roughly 17 to 18.5 inches now. Seat pitch — the distance from a point on one seat to the same point in front or behind — has shrunk as well, from about 31 to 35 inches in the 1970s to as low as 28 inches on airlines like Frontier and Spirit.

Add in crowded flights and expanding waistlines (nearly 40 percent of Americans are obese, about a six percent increase since 2007-2008, according to a recent study in JAMA), and passengers are understandably grumpy. Ninety-three percent of flyers want wider seating, according to a July 2018 survey by the Nielsen company.

And yet, depending on what's decided with this new law first passed by Congress, the airlines could make seats even smaller. A company called Aviointeriors has introduced the SkyRider, a seat that’s more like standing than sitting, says Paul Hudson, president of advocacy group FlyersRights.org. The seats have backs, but Hudson compares it to sitting on a stationary bike. The idea? To cram in more passengers, the pitch between SkyRider seats would be 23 inches. Hudson's group has argued that a tight fit makes it more difficult for passengers to evacuate the plane in case of emergency

Whatever happens, let's face it: Airplane seats are never going to come close to being easy chairs.

So, if you can't or won't pay your way out of economy class, how can you make flying bearable? One option, of course, is to tilt your seat back to gain a few precious inches. But that means crushing the already-cramped passenger behind you.

• Compare airlines. The web site SeatGuru.com compares seat width and pitch for every aircraft in a carrier’s fleet. As for individual airlines, Jet Blue was named the nation’s most comfortable airline in 2018 by WalletHub.com — Jet Blue’s fleet has more legroom than many of its competitors — and Delta announced in 2018 that its new Boeing 777 aircrafts will have 18.5-inch-wide seats. The 777, unfortunately, represents less than three percent of its fleet.

• Bring a cushion. Today’s narrow seats are not well-padded. “It’s a bit like sitting on a park bench or a church pew, especially for older passengers,” says airline expert George Hobica, former president of AirFareWatchdog.com. When Hobica is on a long flight in economy class, he brings a memory foam seat cushion. “It makes these new slim seats a bit more bearable,” he says.

• Walk the aisle. Sitting in cramped seats for prolonged periods can cause back problems and blood clots in your legs, otherwise known as deep venous thrombosis (DVT), says Hudson. The risk of DVT is two to three times higher after four hours or longer on a plane than on other forms of transportation, according to the World Health Organization. That's in part because the seating is so restrictive.

• Pay for the upgrade. You can always shell out the extra $25 or more for the roomier economy seats, such as those in the bulkhead or exit rows. Note that some airlines’ exit row seats don't recline.

• Join a frequent flyer program. Premium economy seats have more leg room, and that’s the main advantage of attaining frequent flier status: You can often get those seats for free.