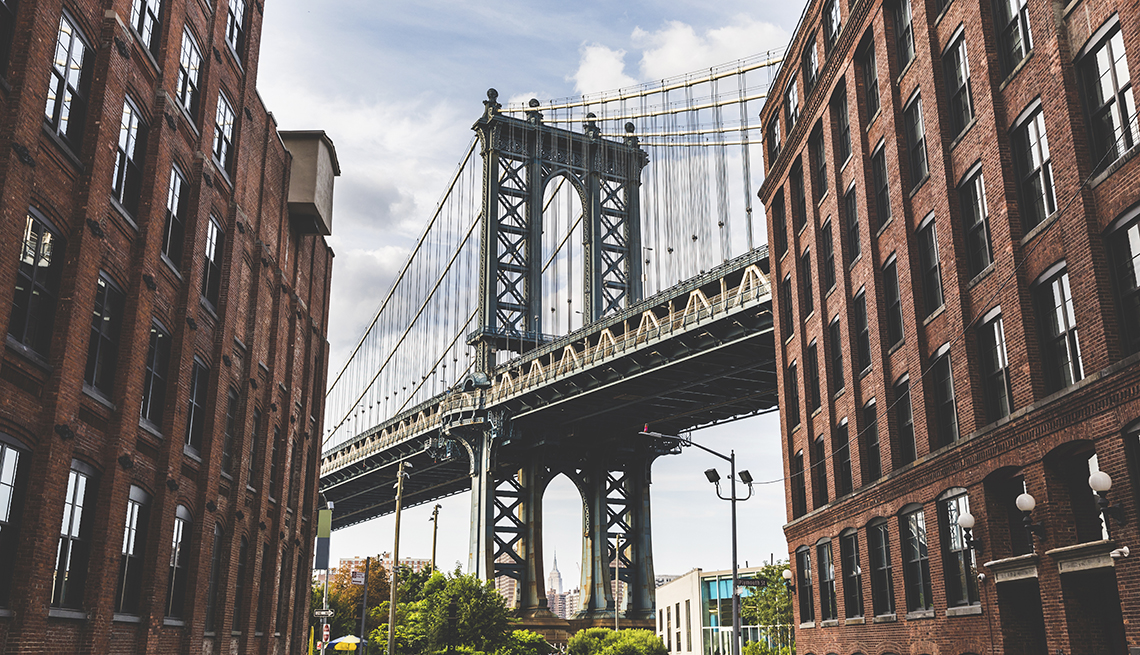 En español | While Manhattan remains the go-to place for visitors to the Big Apple, Brooklyn has emerged as a hot destination for New York City travelers wanting something a little different — evident in the borough's unique culture, rich history and incredible food. Just a quick subway ride from Manhattan, it also offers a more affordable home base for a visit to NYC.

The problem for many first-timers is knowing where to begin. Brooklyn is huge, nearly 100 square miles, with a population of more than 2.5 million spread across nearly 70 neighborhoods. I've lived here for 25 years and haven't yet come close to seeing the whole of the place.

For a good introduction, I'd suggest focusing on the area just over the Brooklyn and Manhattan bridges — a cluster of small neighborhoods (DUMBO, Brooklyn Heights and Downtown Brooklyn) that orbit around Brooklyn's civic center known as Borough Hall. Sequestered in a triangle between vibrant avenues, Atlantic and Flatbush, visitors here are within walking distance of many of Brooklyn's best cultural attractions, natural beauty, restaurants, shops and nightlife.

And note that you're only one or two subway stops (or a healthy walk over the aforementioned bridges) from Manhattan via the nine train lines available at two subway stations servicing Borough Hall: Jay Street/Metro Tech and Borough Hall, which are about 100 yards away from each other.

The things to do, eat, drink and admire I've described below are all within our modest zone (with a few recommendations just steps outside the perimeter). So pick and choose, mix and match, walk and eat, based on taste and interest. If you have trouble with mobility, cabs or car service rides are easy to come by and inexpensive for these short distances.

Walk. The best way to see this area is on foot. Within our unofficial zone, you'll find the landmarked streets of Brooklyn Heights, which lead to the majestic promenade overlooking New York Harbor, the Manhattan skyline and the bridges that span the East River. There are also spectacular views from the picturesque and tranquil walkway along the waterfront of the recently refurbished Brooklyn Bridge Park.

Learn. The 400-plus-year history of Brooklyn can be discovered at the Brooklyn Historical Society, located in a magnificent Queen Anne-style building on Pierreponte Street in Brooklyn Heights ($10 entry for adults; $6 for seniors). The New York Transit Museum portrays the story of NYC's mass transportation history in an actual subway station — wheelchair accessible — on the corner of Schermerhorn and Court streets ($10 entry for adults and $5 for seniors; free on Wednesdays).

A pitching wedge out of the tip of our triangle is the historic area of Fort Greene, where the Museum of Contemporary African Diasporan Arts (MoCADA) is easily found on Hanson Place. It offers free admission and exhibits on the experiences and cultural contributions of African Americans. Nearby is the Brooklyn Academy of Music (BAM), with theater, dance, music, film and literary events in three vicinity outposts. (Check the schedule for events and prices.)

Relax. And a healthy (one mile) walk or — why not? — cab ride past the Barclays Center up historic Flatbush Avenue leads to Grand Army Plaza and entry into Prospect Park, with its 500-plus acres of natural splendor, where you can bring a picnic or just enjoy the view.

There's definitely an overlap between “what to do” and what to eat” in Brooklyn — eating is one of my favorite things to do here.

A great way to save on food is to check out some of the growing number of food halls that are taking over outdoor public expanses or derelict warehouse spaces, and offering nearly every imaginable cuisine at prices reflective of no storefronts and shared operating costs.

These include the originator of this practice, Smorgasburg, with more than 100 carefully selected vendors operating outdoors on weekends in nearby Williamsburg and Prospect Park (easy subway rides from the Borough Hall stations), from spring through fall, and indoors in winter in the Atlantic Mall across from the Barclay's Center where Flatbush and Atlantic intersect.

Dekalb Market Hall is open year round, every day, and features more than 40 vendors, with a nod toward the ethnic diversity indigenous to Brooklyn. It is located in the heart of our triangle, tucked within the Fulton Mall discount shopping/department store mecca.

And directly across from Borough Hall itself is the new Hill Country Food Park featuring six comfort-food purveyors (breakfast through dinner), as well as the new digs of legendary Brooklyn dive bar Hank's Saloon, which hosts live music Thursday, Friday and Saturday nights.

A walk along Atlantic Avenue will present myriad Arabic markets for Middle Eastern delicacies, most famously offered by Sahadi's and the Damascus Bakery, both on the block between Court and Clinton streets.

Further down Atlantic, toward the waterfront, just a half block in on Henry Street and into the Cobble Hill section, is an authentic, affordable Roman eatery called Lillo Cucina Italiana that's tucked into a cozy space and considered one of Brooklyn's best kept secrets. (Shhhh!)

And for the classic Brooklyn experience, Junior's Restaurant and Bakery on Flatbush Avenue has been serving up world-class cheesecake and overstuffed sandwiches since 1950.

There's really no way around paying what may seem like a lot for safe, comfortable and convenient accommodations in New York City, even in Brooklyn. That said, there are many reasonable (not cheap, but reasonable) and attractive options in the Borough Hall area, including boutique hotels that average around $300 nightly in high season, in super-modern accommodations complete with a hipster vibe that is so new Brooklyn.

Some suggestions include the Nu Hotel, the Even Hotel, Hotel Indigo and the Tillary Hotel.

Lower rates can be found at budget chains, including Hampton Inn and Holiday Inn, as well as a Holiday Inn Express and Fairfield Inn & Suites, just outside the auspices of our Borough Hall triangle, in a neighborhood known as Gowanus.

You might also consider checking out home-sharing sites such as Airbnb, where you can find studios or one-bedrooms in the area for less than $200 a night.

Andrew Cotto is a writer and longtime Brooklyn resident.