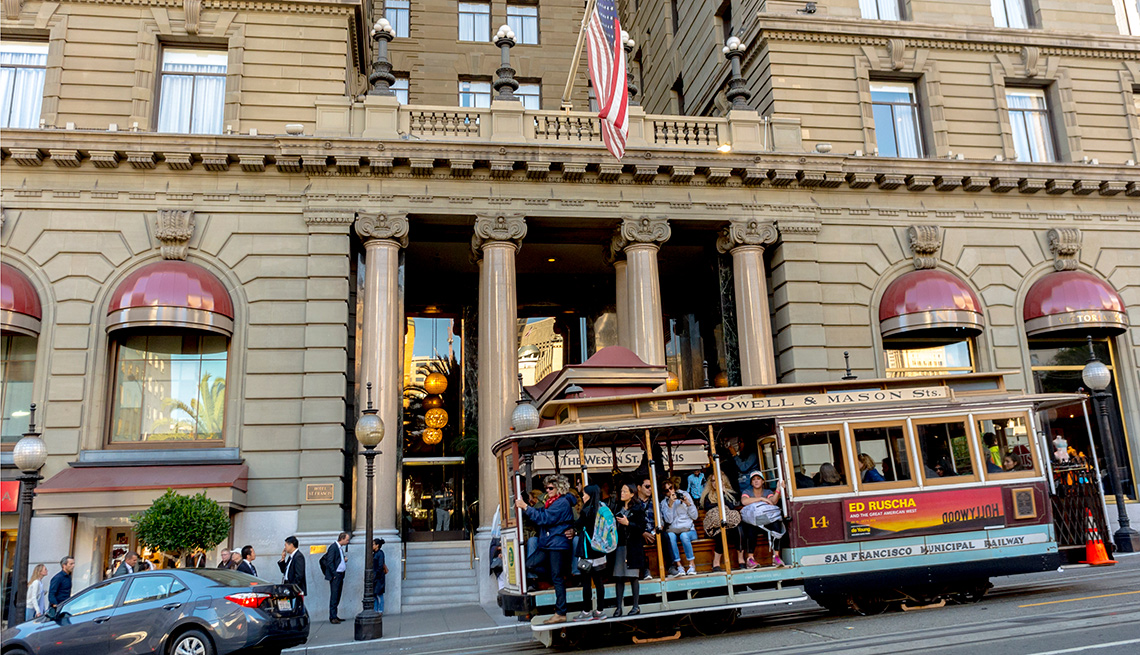 San Francisco is blessed with a wonderfully temperate climate, with temperatures rarely below 40 degrees or above 80. However, with its proximity to the cold Pacific Ocean the weather can be mercurial, and summer days can suddenly turn downright chilly.

High season is June-August. The majority of visitors arrive then, and hotels, shops, restaurants and attractions are correspondingly crowded. You can still have a good time, but you’ll be sharing it with thousands of others. September and October bring lovely Indian summer and fewer visitors, but also conventiongoers, so hotel rooms can be scarce then, too.

From November to March, you’re likely to encounter cool days and scattered rain but also more room availability and better prices, and the weather is rarely inclement for long. San Francisco’s secret sweet season is April-May, when days are sunny, temperatures pleasant and crowds smaller.

Ways to save: For the best hotel rates, visit from December through February. If you want to sample some of the city’s finest restaurants at affordable prices, go during San Francisco Restaurant Week, usually at the end of January, when more than 100 of the city’s celebrated eateries offer prix-fixe meals.

San Francisco offers the full spectrum of hotels, from iconic institutions such as the Fairmont, the Scarlet Huntington and the Westin St. Francis to simple budget places such as the San Remo, the Mosser, Casa Loma and Hotel Beresford. The Palace Hotel is a historic favorite, especially beloved for the Maxfield Parrish painting in its Pied Piper Bar and its sumptuous, soaring Garden Court (plus it offers discounted senior rates). For affordability, your best bet may be a big-brand chain, such as Hilton, Courtyard by Marriott or Holiday Inn, all of which have several properties in town.

Ways to save: Home rental agencies like HomeAway, VRBO and Airbnb may save you money over a hotel stay. Born and still headquartered in San Francisco, Airbnb offers a more affordable alternative. While city regulations have reduced the number of properties on offer, there are still about 5,500. City listings range from single beds for $20 to a 10-bedroom Victorian mansion for $10,000 a night.

How to get there

The most convenient airports are San Francisco International Airport (SFO) and Oakland International Airport (OAK). Taxis are plentiful at both. If you want to arrive by train — well, you can’t, strictly speaking. Amtrak will take you as far as Emeryville Station, where you transfer to a bus for the ride across the Bay Bridge.

Ways to save: Car-share services such as Uber and Lyft — both founded and headquartered in San Francisco — are often cheaper than taxis. Even cheaper are shared airport vans such as SuperShuttle and Lorrie’s. Cheapest of all is the elevated and underground rail system Bay Area Rapid Transit (BART): A one-way ticket to downtown San Francisco is less than $10 from SFO and just over that from OAK. BART offers those 65 and older a 62.5 percent discount with a Clipper Card, obtained in advance.

Activities to arrange before you go

For San Franciscans, living well is a way of life, and attending the many cultural events available, a celebratory rite. Blockbuster shows and performances sell out fast. If you have your heart set on a particular offering, buy your ticket in advance. Typically, you would have better luck at smaller music venues and non-mainstream theaters at the last minute. San Francisco Theater offers ticket sales and TodayTix has discounts of up to 50 percent. Some museum websites sell tickets in advance. You’ll need reservations for the hottest restaurants, too — sometimes months ahead.

Ways to save: With CityPASS, save 44 percent on admission to the California Academy of Sciences, the Aquarium of the Bay, and the Blue & Gold Fleet bay cruise, as well as either the Exploratorium or the San Francisco Museum of Modern Art. The pass is valid for nine days from first day of use and includes public transportation for three consecutive days.

The GoCardSanFrancisco offers a variety of packages at savings of 20 percent to 55 percent on admission to many of the city’s top attractions. You can also build your own package for only the places you want to visit.

In a word: layers! Whatever the season — and whatever the weather is like in the morning — always bring at least a light jacket or windbreaker with you. Even on a gloriously hot summer day, when the fog slips through the Golden Gate in the late afternoon the sweaters and fleeces come out. So be prepared.

Also bring comfortable walking shoes, because San Francisco is superb for walking, its many steep hills notwithstanding. The city’s everyday sartorial style is “start-up chic” — that is, sneakers, blue jeans and T-shirts, or a collared shirt when the VCs are visiting the office. If you’re going to the theater, opera or ballet, or to a splurge restaurant, and want to dress up, by all means pack your fancy best. But don’t be surprised if the tech titan next to you is in sandals and a sweatshirt. The one exception is the San Francisco Symphony’s annual season-opening Black and White Ball in September, when the swankiest ensembles hold sway, bedazzling the night away.

Generally speaking, most of San Francisco's diverse neighborhoods are safe. Still, pack your street smarts because reports of larceny were up 14 percent in 2017. Crowded tourist areas like Union Square and Fisherman’s Wharf attract pickpockets, so keep your wallets and valuables secure.