Advice for Couples Who Stagger Retirement 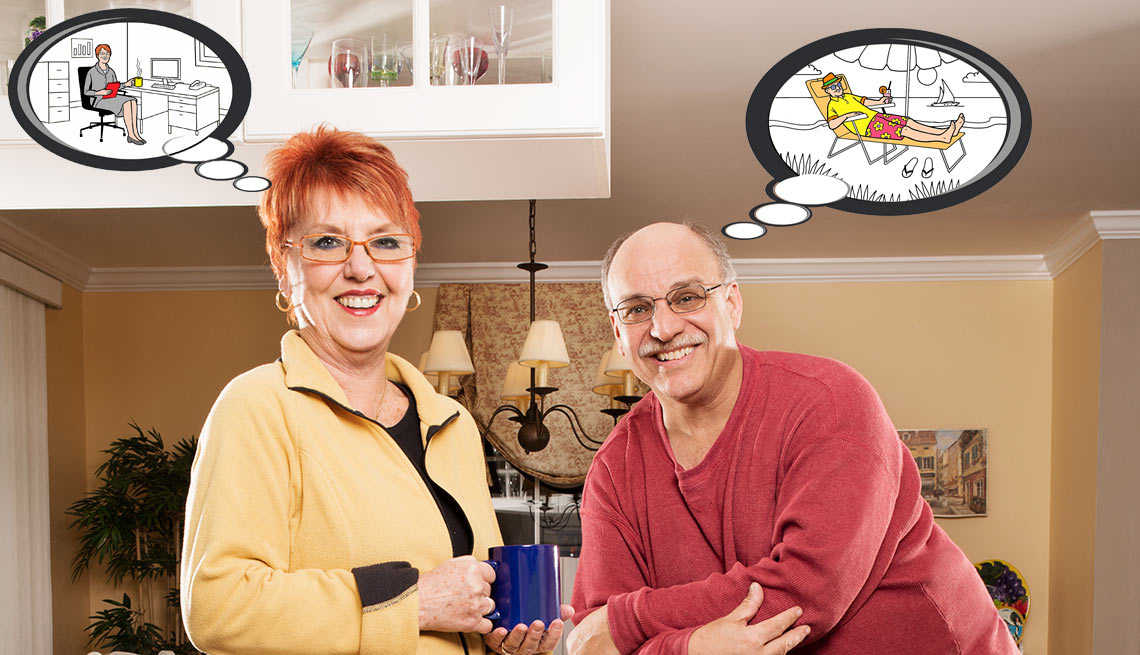 For Rosalie Tyrrell, 69, leaving a career she loved has been a 'difficult transition.' Husband Luis Puccio, now 57, retired several years ago.
Nathaniel Welch
By
March 22, 2016

Rosalie Tyrrell, 69, didn't want to retire. Ever. An administrator at Boston's Massachusetts General Hospital for 33 years, Tyrrell was a self-described workaholic. "I loved what I did and the people I worked with," she says. "Retire? Who would I be without my professional identity?"

Her attitude baffled her husband, Luis Puccio, now 57. In 2008, when his consulting contract — with the computer software company he'd formerly owned — expired, Puccio was abruptly thrust into retirement. For the next few years, Puccio worked odd jobs but felt adrift and ready for a change. "For me, it was obvious," says Puccio. "Even Rosalie's financial guy said we'd saved enough. Why does she insist on getting up at 5 a.m. for a 90-minute commute when we could be renting a condo in Florida?"

He didn't hide his feelings. "Lou called me at work and pestered me about coming home early or taking Fridays off," Tyrrell recalls. "I had a career — and I didn't want to leave it."

Tyrrell and Puccio could be the poster children for Out-of-Sync Retirement Syndrome: As 76 million boomers march toward what was once a generally agreed-upon "retirement age," many are poorly prepared for the conflicts unleashed when one partner retires and the other continues to toil. "Retirement can magnify preexisting problems in a marriage," says social historian Stephanie Coontz. "The decision to stop work forces you to reevaluate what you both want — and you may discover the gaps are wider than either of you thought."

Research shows that marital stress increases during the initial two years of retirement, especially when the husband retires first. "Jobs, like kids, can be buffers in a relationship," Coontz says. "Once the structure of work is gone, unresolved issues rise to the surface."

Boomers in particular may struggle with this transition. "In the past, most couples took it for granted that when one of them retired, the other would, too — and they usually faced only the husband's retirement," says sociologist Phyllis Moen, author of Encore Adulthood: Boomers on the Edge of Risk, Renewal, and Purpose. "Two-career boomers are the first generation that has had to deal with his-and-her retirements."

Indeed, fewer than 20 percent of all couples quit working in the same year. And a recent study found that 38 percent of retired couples disagree on the lifestyle they want to lead.

HOV lane for her, off-ramp for him

Complicating the picture is the fact that many 50+ women in the workforce opted for the "mommy track," putting their careers on hold while they raised their families. Then, when their nests emptied, they reentered the workforce with renewed ambition. Today, more than 25 percent of women ages 65 to 69 — and 15.5 percent of women ages 70 to 74 — are employed full time. (The figures for men are 33 percent and 24 percent.) Not only do they enjoy the regular paycheck, they also don't want to lose the intellectual stimulation and social life a job often provides.

See also: How to Realign Your Retirement

"While husbands may be thinking about volunteering, traveling or having more time as a couple," notes Dorian Mintzer, coauthor of The Couple's Retirement Puzzle, "their wives may be hitting their stride at work. Both spouses are in transition, but they're traveling different roads."

More couples might unplug in tandem if their economic views didn't clash. "Even in the best relationships," Mintzer says, "money can stir up intense feelings that complicate the retirement decision." Men and women whose self-esteem hinges on their income may suddenly feel worthless or scared when that paycheck disappears. "What will happen to us the next time the stock market goes crazy?" wonders Tyrrell. "Every day there's another scary headline about boomers outliving their savings."

A 72-year-old Massachusetts engineer, who asked not to be named, says he and his wife have "been wrestling with this issue forever. I'm not worried, but my wife — a teacher who's thinking about [retiring] — routinely panics." He retired seven years ago and still can't persuade her to look closely at their cash flow. "Every so often she'll 'bungee' into the conversation, but she'd feel a lot better — and we'd argue a lot less — if she had the complete picture." 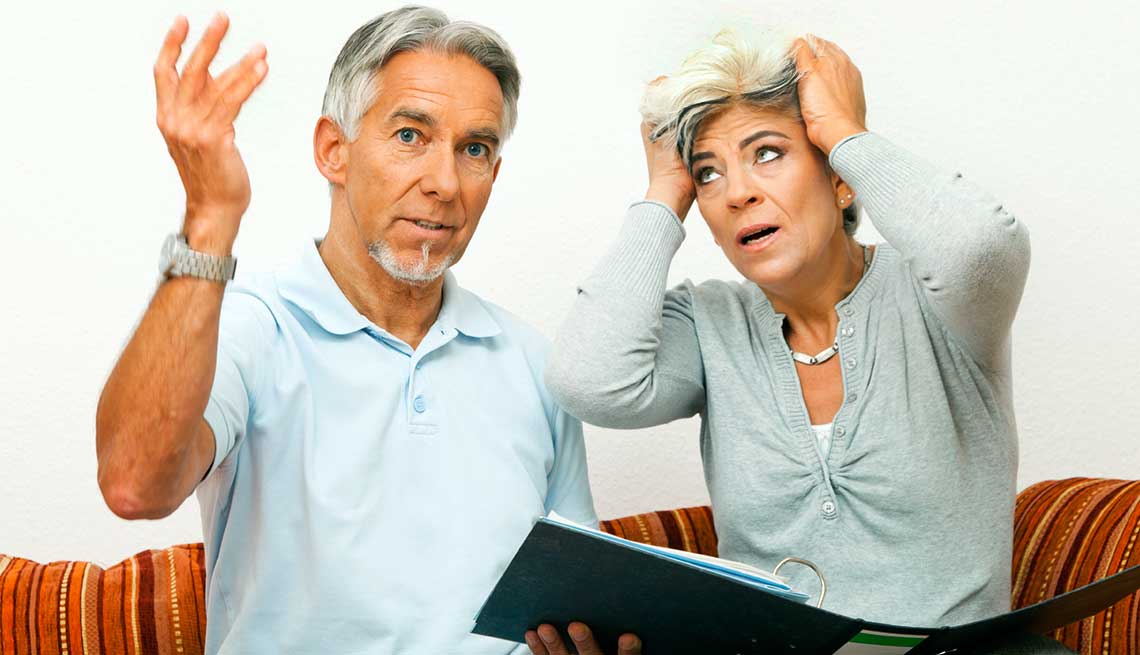 When one person in a relationship retires while the other has no plans of doing so, stress — from emotional to financial — can weigh heavily on both.
Istock

As difficult as it may be to stumble into misaligned retirements, it's even harder to have retirement shoved down your throat. "It's painful to be let go at any age," says sociologist Moen, who has studied gender and retirement since 1985. "But when you're 60+, [it's] hard to find another full-time job in your field that pays close to what your previous job paid."

That's what happened two years ago to a 62-year-old product developer who'd put in 32 years at Xerox Corp. in upstate New York. "The company had recently announced another round of layoffs," explains the employee, who asked not to be named to protect his privacy. "But somehow you still never think it will be you. When my manager gave me 20 minutes to pack up my things and leave the building, I felt sucker punched."

Though the layoff victim got a pension and a generous severance package, the tension at home soared. "We butt heads a lot," he says of himself and his wife, a 65-year-old preschool director. "She's scared. I get that. But my life changed drastically, and she's a mess?"

The involuntary retiree has found part-time work mentoring students at nearby Rochester Institute of Technology. "My wife thinks I'm not looking hard enough for another full-time job," he says. "But that's just not true."

His wife likens the experience to stages of grief: "First there's shock, then anger, then ... I don't know what," she says. "I think we're still stuck in anger."

Even when they manage to synchronize their departures from work, men as well as women report a mix of sadness and apprehension as the actual exit date approaches. "I'm having a very difficult transition," admits Tyrrell, who finally retired from her job as a hospital administrator in 2014. "I'm feeling kind of lost."

Spouses of the newly retired, meanwhile, often have no choice but to ride the emotional roller coaster with their partners. "Watching my husband go from 'being somebody to being nobody,' as he saw it, was very hard," recalls Susan Itkin, 65, a school social worker in Rochester, N.Y. "It was a struggle for both of us."

When budget cuts loomed in 2001, Itkin's husband, Howard, a high school teacher, opted to take advantage of a last-minute buyout. Susan tried to be supportive, but Howard, now 70, interpreted her advice as criticism that he was taking too long to figure out what to do next. One night, in a fit of frustration, he snapped: "What do you want me to do? Stock shelves in the supermarket?"

Their off-kilter work commitments "added a whole new layer of tension to our marriage," which took a year or two to resolve. Fortunately, both eventually made the adjustment, and Howard settled into a happy retirement.

Margery D. Rosen is a New York-based writer and editor.