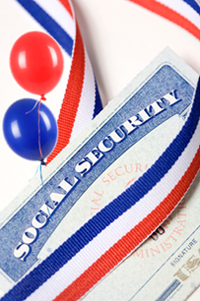 This and Related Reports

As it marks its 80th birthday, Social Security remains critical to the financial security of current and future generations.  According to a national survey of adults 18+, Social Security remains a core part of Americans’ retirement security, and is popular across generations and political ideologies. The survey also continues to find that Americans want to live independently; and that challenges around saving for retirement underscore the importance of the program for future generations. Details from the survey—starting with four key themes—are presented below:

Four in five adults (80%) rely on Social Security, or plan to rely on it, in the future as a source of retirement income.  In fact, a third (33%) say it is the source of income that they rely on or plan to rely on most during their retirement. The majority of adults completely agree that Social Security provides financial security for all Americans and that those who count on it most would really suffer without it (57%), and that it makes it possible for older Americans to remain independent (53%).

Social Security continues to be popular across generations

The majority of Americans (66%) view Social Security as one of the most important government programs; and this view has remained consistent over time (i.e., in 1995, 2005, 2010 and 2015). The vast majority of Americans (82%) also believes it is important to contribute to Social Security for the common good.  While younger adults, particularly those age 30-49, have less confidence in the future of Social Security than older adults, they still value the program. Specifically, nine in ten adults under 30 (90%) believe Social Security is an important government program, and nearly nine in ten (85%) want to know it will be there when they retire.

While Americans recognize the importance of financial planning, many often find it difficult to save for retirement.  Obstacles to saving include having to focus on current financial needs (69%), and not having enough money left over after paying their bills (47%).  Three in five Americans (64%) have concerns that they won’t be able to live independently as they age.  Three in five also express concern that Social Security won’t be enough to get by on (65%) and won’t be there for them when they retire (64%). Top concerns also include having a major health care expense that could wipe them out financially (69%) and not having enough savings to last their lifetime (68%).

AARP commissioned GfK Roper, a national survey research firm, to conduct a national random digit dial (RDD) telephone survey of 1,200 adults aged 18 or older. A total of 717 respondents were not retired and 483 were retired. Interviews were conducted from June 4 to June 28, 2015. The results from the study were weighted by age, sex, race, region, and education.  For more information contact Alicia Williams at ARWilliams@aarp.org.