At the Midway Safe Harbor Center playground northeast of Orlando, Fla., revelers climb the bright orange staircase, wiggle on wobble boards and swivel in spinning seats. Getting to behave like children is quite a selling point here, considering that many using this new playground haven't been called "kid" in decades. 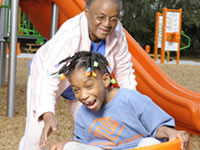 Several newly designed playgrounds now have equipment for the entire family to enjoy.

Welcome to the multigenerational playground, where children's slides and monkey bars sit beside equipment specifically designed to be used by older adults.

On weekends, Dorothy Jackson, 73, of Midway, Fla., takes a break from her volunteer work at the adjacent community center to watch her 6- and 9-year-old great-grandchildren swing, slide and climb. She does this while twirling on a spinning seat or giving her arms a workout.

"I go out on the playground every day," says the great-grandmother of 15, who raised three of her grandchildren. "In order not to get sick you have to keep the body up, and this playground helps me do it."

Many grandparents are caregivers and say they want to be.
(Prime Time Focus)

No two spaces look the same. Each is designed with input from the community. At the Florida playground, a group of about 25 people, including older adults from Midway Safe Harbor's adult enrichment and foster grandparent programs and children from a local boys and girls club, participated in a "design day." The adults wanted exercise equipment that targets range of motion, muscle strength, stability and balance, says Midway Safe Harbor Center administrator Brenda Knight — and that is what they received. Each of the three exercise stations incorporates yoga moves to build flexibility and stability. A staircase helps work out creaky knees, and strength exercises illustrated on the equipment work on the whole body.

For Constance Anderson, 60, the playground eliminates the old excuse of "I really don't have the time to go and exercise myself because I've got to watch these kids." Instead of sitting her 6-year-old grandson in front of the TV while she putters around the house, Anderson opts for outside. "I get my exercise, and the kids get theirs, too."

The Florida space was constructed during a playground building blitz that began in fall 2011 and will finish this spring. The project is part of a multigenerational initiative by the health insurer Humana and KaBOOM!, a nonprofit that aims to build a playground within walking distance of every child's home. By spring, $100,000 play spaces will be in or near nine other U.S. cities — San Antonio; Seattle; New Orleans; Greensboro, N.C.; Albuquerque, N.M.; Tucson, Ariz.; Nashville, Tenn.; Thermal, Calif.; and Cedar Rapids, Iowa.

Children from the center also weighed in by drawing pictures of their dream playgrounds. Using the artwork, adult volunteers then selected elements including a rock-climbing wall, slides and monkey bars. On construction day, adults and children painted their names and pictures on mosaic tiles used throughout the playground. The whole group decided the palette: bright orange and green that mimic the Midway Community Schools colors.

Walk circles around the playground and tick off your recommended 30 minutes of daily physical activity.

Place your hands against a piece of equipment and step back. Try to keep your heels on the ground as you stretch out your legs and calves. Then stand on a step or platform and hang your heels off the edge while holding on to something. Lift up to balance on your toes. Do a few repetitions to build calf muscles.

While seated, pick up one leg and draw pictures or circles with your toes, stretching your ankle. Drape a purse over your ankle and lift your leg from the knee to work shins.

Stand under monkey bars. Reach your arms up and walk from one side to the other, grabbing bars as you go, to elongate the spine and stretch out the shoulders.

The KaBOOM!/Humana partnership is based on the multigenerational model, according to Bruce Bowman of KaBOOM! Humana wanted to help build playgrounds for two reasons. The first: obesity.

Seventeen percent of children and a third of all 60-plus adults in America are considered obese. "While some of the extra weight may be due to too much food consumption, the opportunity for many people to have areas to just do plain old physical exercise has become more limited," says Scott Latimer, M.D., market president for Humana.

The second reason: Getting adults to exercise is good for business. The benefits of exercise in later life include slowing bone loss and reducing the risk of dementia, diabetes, heart disease and certain cancers. Exercise also builds muscle that helps lessen the chances of falling, a leading cause of disability in later years, and promotes sounder sleep. Research also shows that adults who play — or are simply physically active — live longer, happier lives.

But Humana learned through internal research that simply telling people they should exercise wasn't enough. "We've found that if you can make a health activity fun," says Latimer, "people are much more likely to do it."