En español | Ed Jackson Jr. spends most of his waking hours toiling inside a construction trailer on a dusty lot in Southwest Washington, D.C. His job description might read as follows: "Capture architectural lightning in a bottle, in a way that memorializes an iconic U.S. figure and effortlessly conveys his peace-loving, egalitarian ethos to millions of people."

See also: MLK's 'I Have a Dream' speech remembered. 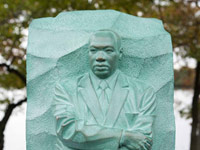 A tall order, to be sure, but not one that intimidates Jackson, 61, who is the executive architect for the Martin Luther King Jr. National Memorial. Fifteen years in the making, the four-acre, $120 million project abuts the Tidal Basin and is on a direct line between the Jefferson and Lincoln memorials. It will be officially dedicated on Aug. 28.

Of the $120 million needed for the memorial, $108 million had been raised by Nov. 10, 2010, says Harry E. Johnson Sr., president and CEO of the Martin Luther King Jr. National Memorial Project Foundation.

"I could tell immediately she was saying, 'No, no, this is not what I want!' " Jackson recalls. " 'This is not what I anticipated!' "Jackson explained to her why he found the winning design solution compelling. "When a layperson looks at a two-dimensional drawing, they cannot perceive or comprehend the design as depicted, because they see only a two-dimensional representation," Jackson says. "What I had to do was describe it in such a way that it came alive for her, as it did for me.