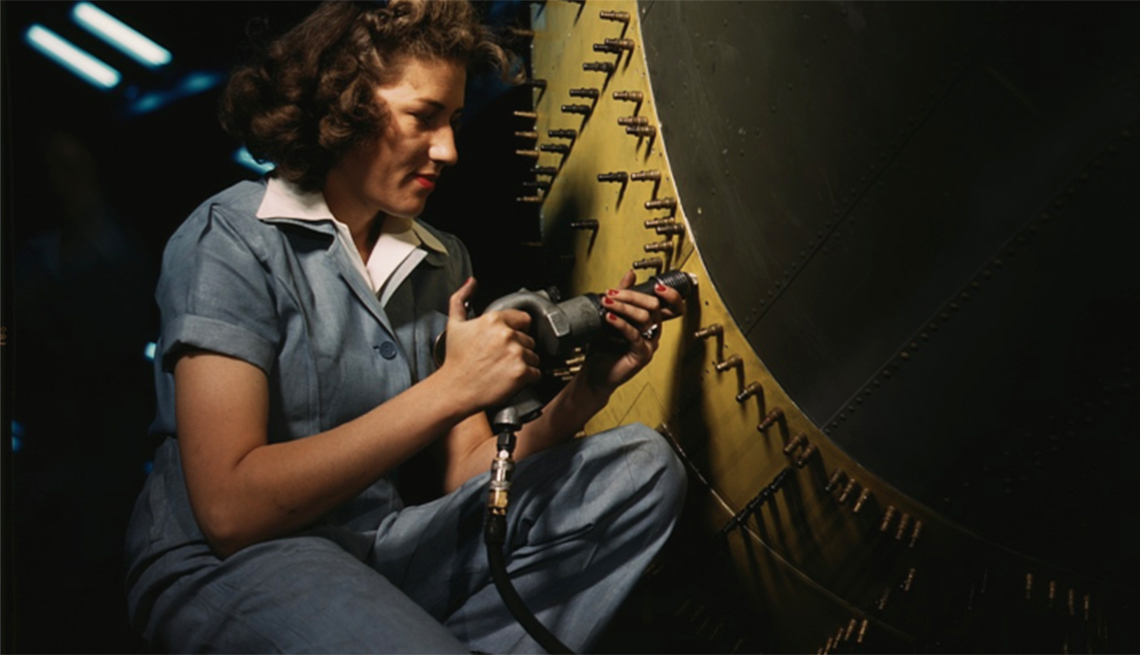 A riveter at work on a Consolidated bomber in October 1942 at Consolidated Aircraft Corp. in Fort Worth, Texas.

En español | The idea of Rosie the Riveter, a strong woman who gets things done while the men are called away to fight the enemy, was born during the early years of World War II.

But the ideal of Rosie, a take-charge woman who is part of an indomitable sisterhood of leaders, was reborn in 1982 when a poster created in 1943 resurfaced at the National Archives.

The inspiration behind Rosie the Riveter was Rosalind “Roz” Palmer Walker, a well-to-do Long Island 19-year-old who decided to forego a Seven Sisters college education to start work in 1942 on the assembly line at Vought Aircraft Co. in Stratford, Connecticut. You could call her the first Rosie.

She also was the last surviving Rosie who became famously associated with the symbolic Rosie. She died March 4, 2020, at age 95 in New York City.

The legend of Rosie was begun by Igor Cassini, a nationally syndicated society columnist who wrote about Rosalind Palmer. Writer Alice Hughes of King Features Syndicate visited Palmer again in July 1943 for another story. 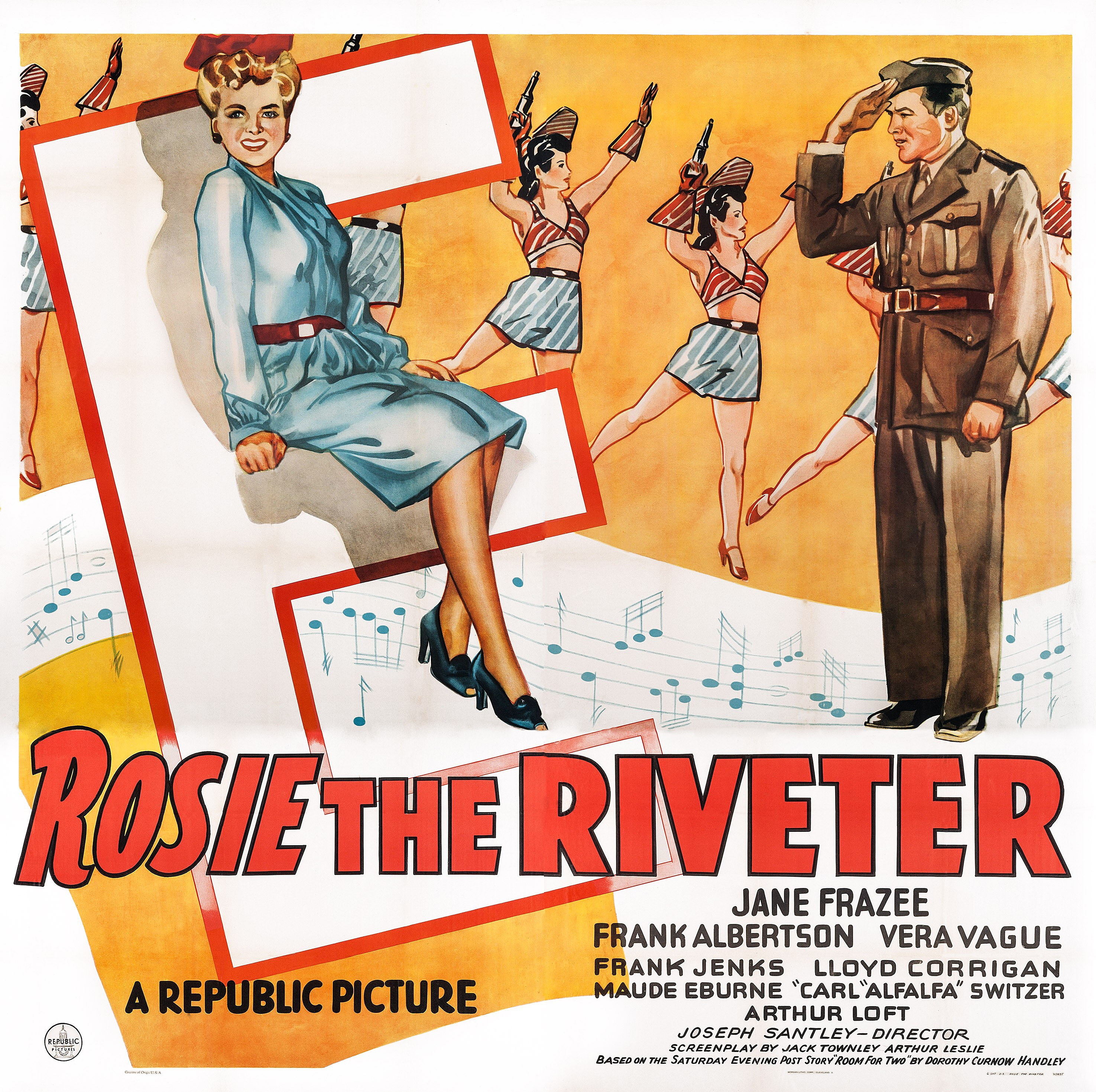 Cassini's column caught the fancy of songwriters Redd Evans and John Jacob Loeb, who wrote a song titled Rosie the Riveter that several bands popularized in 1943.

A few months later, artist Norman Rockwell was inspired to create a cover for the May 29, 1943, issue of The Saturday Evening Post in advance of Memorial Day. He asked then-19-year-old Mary Doyle Keefe, a phone operator in Arlington, Vermont, to pose for him. She died April 21, 2015, at age 92 in Simsbury, Connecticut.

By 1944, Hollywood also had stepped up to Rosie's plate.

Rose Will Monroe, a riveter at Willow Run Aircraft Factory in Ypsilanti, Michigan, became another Rosie when actor Walter Pidgeon discovered her that year and tapped her to appear in a War Bonds promotional film. Monroe died May 31, 1997, at age 77 in Clarksville, Indiana.

In April 1944, Republic Pictures released a full-length movie Rosie the Riveter, set in a California defense plant and starring actress Jane Frazee as Rosalind “Rosie” Warren. Frazee, leading lady in several 1940s films who was dubbed the “Queen of the B Musicals,” died Aug. 30, 1985, at age 70 in Newport Beach, California. 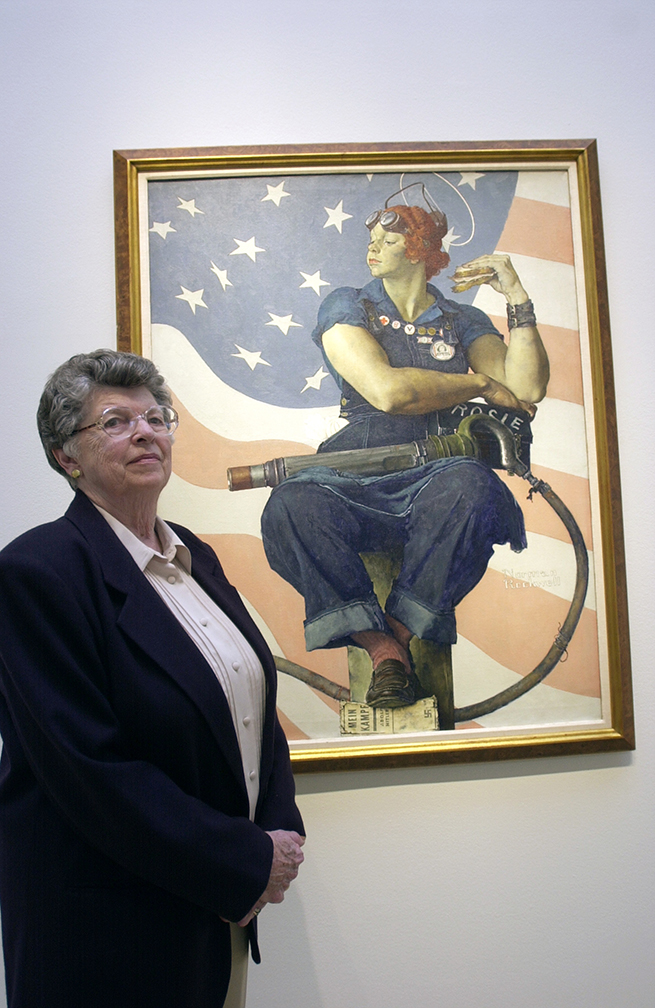 Mary Keefe, 78, stands next to Norman Rockwell's painting "Rosie the Riveter" on May 17, 2002, at Sotheby's auction house.

Perhaps the image that pop culture today considers the most iconic is the “We Can Do It!" J. Howard Miller poster created as part of a patriotism campaign for Westinghouse factory workers. But during the war, that poster was displayed for only a few weeks as part of a rotating series of inspirational messages for Westinghouse workers on the home front.

Most of the women of the war effort left their jobs when the war was over. And Miller's poster languished unnoticed in the National Archives for 40 years — until it was rediscovered in the government's collection and published in a magazine in 1982.

At one point, Geraldine Hoff Doyle, who had worked briefly at American Broach & Machine Co. in Ann Arbor, Michigan, believed she was the subject of a 1942 United Press International photo thought to have inspired Miller. But in 2016, almost six years after Doyle died, Professor James Kimble of Seton Hall University in South Orange, New Jersey, unearthed evidence that another woman was photographed.

Naomi Parker (later Fraley), in a polka-dot bandanna to keep her hair from getting tangled in machinery at Alameda Naval Air Station in Oakland, California, was the name affixed to the negative. Fraley died Jan. 20, 2018, at age 96 in Longview, Washington. Doyle died Dec. 26, 2010, at age 86, in Grand Ledge, Michigan.

A movement in need of inspiration

The “We Can Do It!” Rosie also could have been entirely a product of Miller's imagination. But its resurfacing came at an ideal time for the women's movement, which was looking for inspiration.

In 1982, the Equal Rights Amendment fell three states short of ratification. The National Association of Women Judges pointed out that the Reagan administration had just four women on its list of 84 federal court appointees. And the number of single-parent families headed by women had more than doubled from 1970 through 1981.

In its original time, “We Can Do It!" was an echo of the 1941 song written the day of Pearl Harbor, “We Did It Before and We Can Do It Again.” In 1982 and beyond, it became the rallying cry for a new generation of women.

The millions of women who worked in factories during WWII also inspired a national park: The Rosie the Riveter World War II Home Front National Historical Park in Richmond, California, opened in 2000. It was assembled from the sites of shipyards, a tank factory and housing developments that expanded during the war.