National Museum of the American Latino Gets Approval of Congress, President 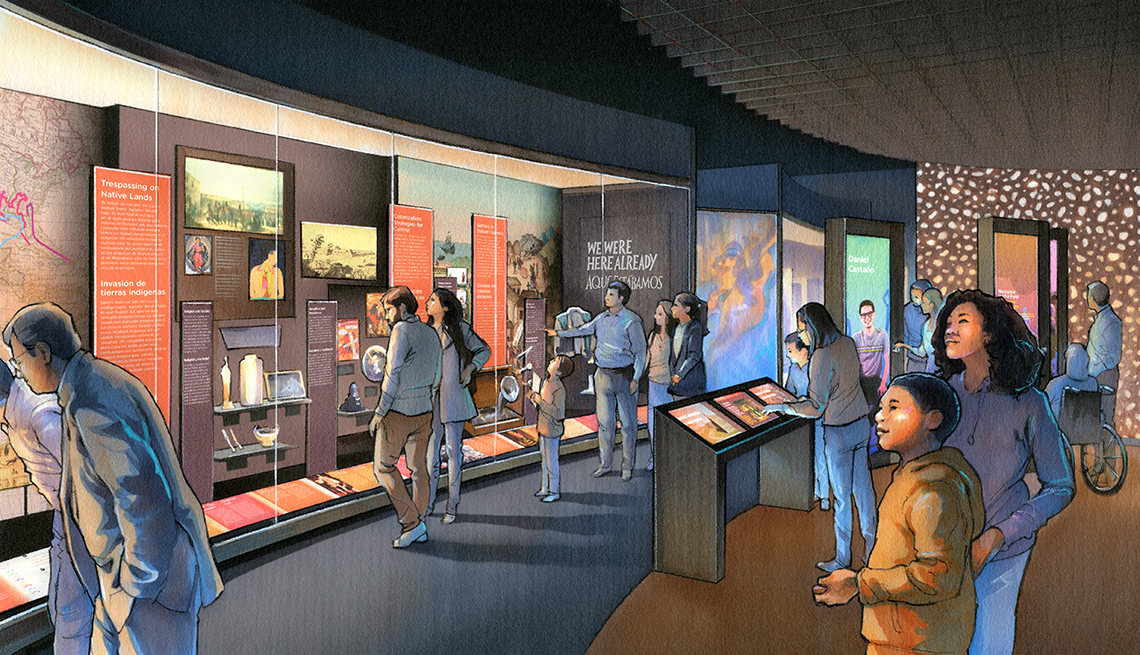 The Molina Family Latino Gallery that will be inside the Smithsonian’s National Museum of American History starting in 2022 is in the planning stages.
Smithsonian Latino Center
By:
Patricia Guadalupe
En español
December 28, 2020

Supporters of a museum on the National Mall in Washington, D.C., that focuses on one of the fastest-growing ethnic groups in the United States are calling the enactment of an economic stimulus bill that includes money to jump-start a Latino museum a historic moment.

The legislation, which includes $35 million this fiscal year to start the process and continue it for years to come, was passed last week as part of a $2.3 trillion omnibus spending bill and signed into law Sunday. The national museum will be part of the Smithsonian and center on the country’s 60.6 million Hispanics — plus the 3.2 million Hispanic residents of Puerto Rico.

“The passage of this bill caps off a decades-long effort to create an institution that would celebrate and commemorate the over 500 years of Latino contributions to the building, shaping and defending of America,” says Danny Vargas, chairman of the Friends of the National Museum of the American Latino. “We celebrate this historic moment with the countless individuals who have worked so hard over the years to make this happen and our innumerous supporters all over the country.” Yvette Peña, AARP’s vice president of multicultural leadership, is a board member of the group.

Also included in the massive spending bill is the creation of a Smithsonian Women’s History Museum and $900 billion in economic stimulus, needed because of the coronavirus pandemic.

The Latino museum had been in the works for several years, largely in fits and starts. A 1994 report from the Smithsonian Institution Task Force on Latinos concluded that the Smithsonian, the largest museum complex in the world, displayed a “pattern of willful neglect” toward the Latino population in the United States. A direct result of that report was the creation of the Smithsonian Latino Center, which helps design exhibits within existing museums.

The idea to create a museum focusing on Hispanics, who surpassed Blacks to become the nation’s largest minority group in 2003, had been floated for some time but gained momentum after that task force report. Legislation was introduced, including a bipartisan effort by then-Reps. Ileana Ros-Lehtinen (R-Fla.) and Xavier Becerra (D-Calif.), but it went nowhere.

Senate bill was at a standstill

“For many years, many Americans — Latino and otherwise — believed that the mosaic portrayed in Washington’s museums was missing a few tiles,” Becerra, now California’s attorney general and President-elect Joe Biden’s nominee to lead the U.S. Department of Health and Human Services, told a House committee in 2004.

A commission was created 12 years ago to look into establishing a museum, and supporters continued to push for the idea, including having several fundraisers and enlisting the aid of prominent Hispanics such as artists Rita Moreno and Chita Rivera. The effort gained steam in July when the House approved by voice vote a bill sponsored by Rep. José Serrano (D-N.Y.), himself a native of Puerto Rico.

After this year’s House vote, the legislation went to the Senate where it continued to enjoy bipartisan support until Sen. Mike Lee (R-Utah) blocked a scheduled vote. Supporters of the museum effort in the Senate, including New Jersey Democrat Robert Menendez and Texas Republican John Cornyn, then added it to the spending bill.

Where would a Latino museum be located?

HR 2420, the bill passed July 27 to create a National Museum of the American Latino, suggests four sites on or near the National Mall for consideration:

• The Smithsonian's Arts and Industries Building, which went through several years of renovations starting in 2009

• A vacant area north of the Capitol Reflecting Pool that is crisscrossed with sidewalks and bike paths.

• The U.S. Department of Agriculture main administration building in the next two blocks east

“Latinos have contributed significantly to the success of the United States while overcoming systemic discrimination — and our stories have largely been erased from U.S. history. Now, our stories will have a new home with a Latino museum on the National Mall,” says Rep. Joaquin Castro (D-Texas), chairman of the Congressional Hispanic Caucus.

Menendez calls inclusion of the museum in the spending bill a validation of Latinos’ struggles and impact on this country.

“We have overcome tremendous obstacles and unbelievable hurdles to get to this historic moment. But as I’ve said before, Latinos are used to overcoming obstacles,” Menendez says. “Passage of the National Museum of the American Latino is the culmination of decades of hard work, advocacy, successes and setbacks in the movement to recognize Latino contributions to America’s history, economy and culture. …

“As a first-generation Cuban American, I know what it’s like to feel invisible in a nation where Latinos are seldom celebrated,” Menendez says. “I am enormously proud of my role in getting this legislation over the finish line and cannot wait until the day when I can take my granddaughters to visit the National Museum of the American Latino in our nation’s capital.” 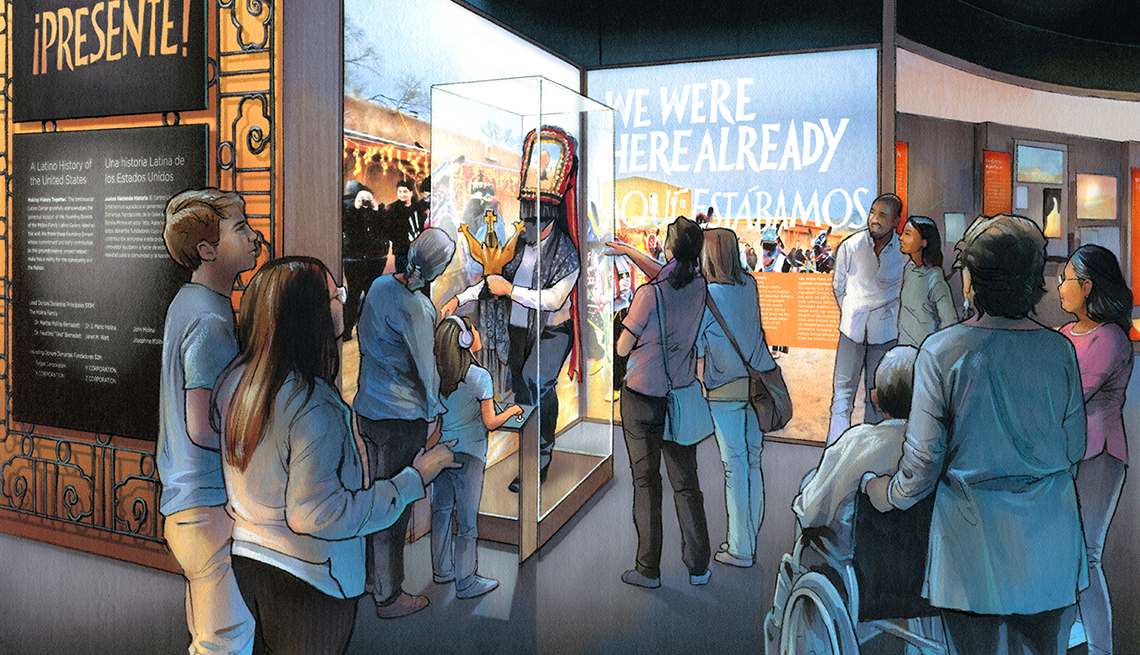 Supporters of a Museum of the American Latino hope that the Smithsonian's Molina Family Latino Gallery, opening in 2022, will spur a desire among visitors to the National Museum of American History to see more.
Smithsonian Latino Center

The coronavirus pandemic was part of the argument to give the museum the green light, Vargas says.

“Latinos represent a disproportionate number of COVID-19 cases and a disproportionate number of essential workers that are keeping our food supply going, that are mending our wounds and taking care of our sick. At the same time that we have the social justice upheaval that’s going on in the country, the Latino community is impacted by all that,” he says. “The Latino museum is not a side issue. It is interlinked with everything that’s going on.

“The Latino community has had a major role in every aspect of our society. Most of the Latino history has gone unreported and unrecognized in our textbooks and not displayed in our museums,” Vargas says.

One point that supporters considered key to making this bill more viable than previous versions is a requirement for a diversity of political viewpoints. From the text of the bill:

In carrying out its duties, the Board of Trustees shall ensure that the exhibits and programs of the museum reflect the diversity of the political viewpoints held by Latinos of the United States on the events and issues relating to the history of Latinos in the United States.

The law also requires the museum’s board of trustees to be politically and geographically diverse.

“Never in its history has the Smithsonian been required to ensure that there was a representation of the variety of points of view in a particular community. That has been a bone of contention among conservatives with other museums,” Vargas says. “It’ll help from a political partisan standpoint, but it would also help out the museum.”

But even with this approval, the reality of a Latino museum is still years away. Discussions around a national museum for African Americans, which opened as the National Museum of African American History and Culture in 2016, began in 1915 with Civil War veterans, and plans for a museum honoring Native Americans — the National Museum of the American Indian opened in 2004 — also date that far back, including the Heye Foundation’s museum in New York City founded in 1916 that became part of the Smithsonian in 1989. Proponents of a national museum commemorating Asian Americans, the country’s fastest-growing racial group, also have introduced a bill, but that effort has been stalled for more than a year.

To help lobbying efforts for the Latino museum, supporters say they looked at what the African American and Native American communities had done. They envision opening the doors to the new museum in eight to 10 years.

“There’s already a template [of what to do], and we hope that cuts down on the time frame,” Vargas says. In 2022, the National Museum of American History will host a nearly 5,000-square-foot bilingual exhibition of Latino art and culture, an endeavor that supporters call a taste of what’s to come in a fully functional Latino museum. “It’s like the appetizer before a 10-course meal.”

As with the African American museum, the legislation establishing a Latino museum creates a public-private partnership, with the federal government kicking in 50 percent of the museum’s costs and the other half being raised privately. The new law proposes four possible sites for the museum around the National Mall, including a building that is already a Smithsonian property and a facility under the jurisdiction of the U.S. Department of Agriculture.

Wherever it is, it will be grand, Vargas says.

“Five hundred years [of history from] 24 different countries of origin — it’ll be complex and multidimensional,” he says. “It’ll be one of the most fascinating, eye-opening, inspiring history lessons that plays out on the National Mall. It’s the right thing to do, it’s the smart thing to do and it’s the right time to make this happen.”

Editor's note: This article was originally published on September 23, 2020. It's been updated to reflect the $2.3 trillion spending bill.