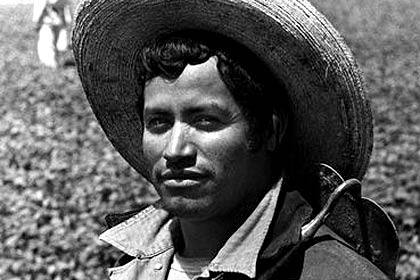 The U.S. government's Bracero Program allows more than 4.5 million Mexican nationals to work in the United States from 1942 to 1964.

The U.S. government's Bracero Program (named for the Spanish term for "manual laborer") allows more than 4.5 million Mexican nationals to come to the United States for temporary agricultural work, setting the stage for economic dependency and a pattern of repetitive migration.

The program begins with the importation of a thousand experienced Mexican agricultural laborers to grow and harvest sugar at mills in and around Stockton, Calif, and later expands to other parts of the United States. 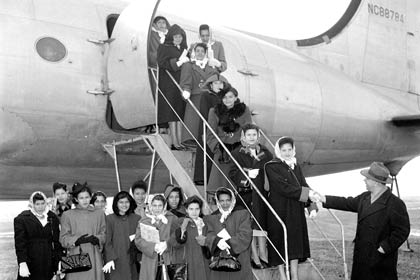 A group of Puerto Rican women arrive at the airport in Newark, N.J., in 1953.

With the end of World War II, Puerto Ricans, who have had U.S. citizenship since 1917, begin coming to the United States in record numbers to work in the nation's booming manufacturing sector.

More than a million Puerto Ricans come to the United States in this 15-year period, mainly settling in New York. 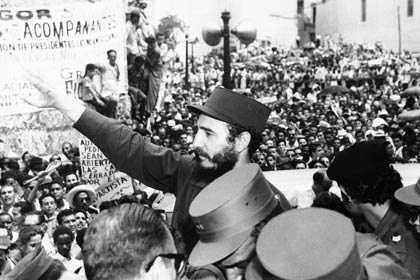 Fidel Castro in Havana on March 22, 1959, less than a month after he was sworn in as prime minister of Cuba.

The migration of Cubans and Dominicans to the United States accelerates sharply with increasing political and economic turmoil in their respective homelands. In the Dominican Republic, opposition to the brutal regime of Rafael Leónidas Trujillo reaches a fever pitch in the late 1950s, and he is assassinated in 1961. In Cuba, the rebel forces of Fidel Castro seize power in 1959, ousting the U.S.-backed dictatorship of Fulgencio Batista.

The Cuban immigrants, leaving their homeland for political reasons, are mainly professionals from the middle and upper classes of the island. Many settle in Miami, making it a magnet for future Cuban and Latin American immigrants. Similarly, the Dominican immigrants tend to be better educated, and employed in better jobs, than those they leave behind. 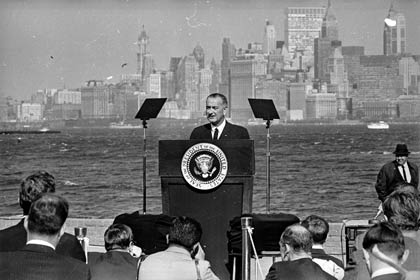 President Lyndon B. Johnson speaks next to the Statue of Liberty in 1965 after signing the new immigration law.

The Immigration and Naturalization Act of 1965 puts an end to the system of visa quotas by country of origin that's been in place since 1924, paving the way for a much more diverse immigration.

Most of the new immigrants come from Central and South America. 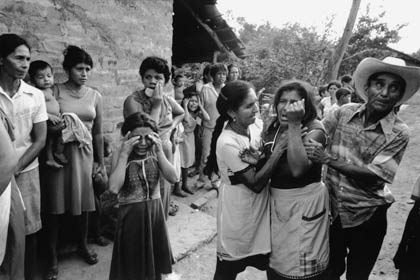 The mother of a dead soldier receives his coffin during the civil war in El Salvador.

The poverty and political instability that accompanies the Sandinistas' rise to power and Nicaragua's contra war, as well as the civil war in El Salvador, trigger the migration of hundreds of thousands of citizens from the two Central American countries. 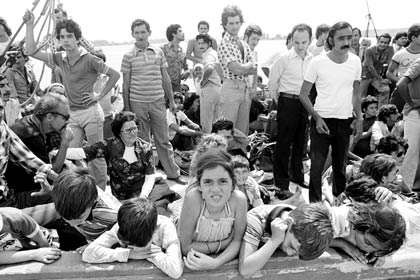 About 125,000 people leave Cuba from the Mariel harbor and head to Florida, set off by the deteriorating Cuban economy and discontent with the Castro regime.

This mass exodus from Cuba to the United States begins on April 5, when 10,000 Cubans enter the Peruvian Embassy in Havana, demanding political asylum, with the purpose of obtaining authorization to leave the country. The Cuban government ultimately allows many of them, and others, to leave the country. 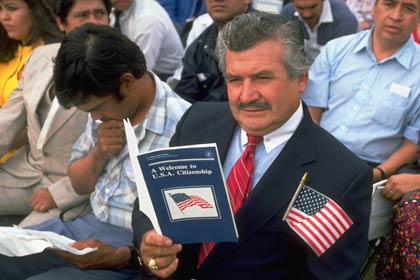 New U.S. citizens prepare to take the oath of allegiance in a naturalization ceremony for 4,000 people in Los Angeles.

Congress passes the Immigration Reform and Control Act, and President Ronald Reagan signs it into law. The law is designed to control the flow of immigrants into the United States, offers a mechanism for the legalization of millions of illegal immigrants, and grants amnesty to about 3 million immigrants who entered the United States before 1982 and have lived here since then. 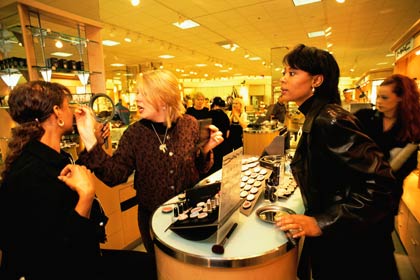 A Hispanic woman buys cosmetics at Nordstrom, an upscale department store, during the economic boom of the 1990s.

The dot-com boom of the 1990s fuels new streams of immigration to the United States. 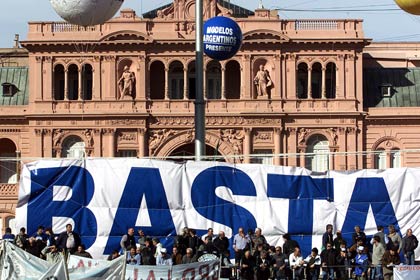 In Buenos Aires, Argentinians pour into the streets outside the presidential palace in 2001 to protest the country's economic collapse.

Armed conflicts and political and economic instability in three South American countries impel large numbers of their citizens to flee to the United States.

In Argentina, hyperinflation and other economic problems lead in 1999 to the collapse of the country's banks and economy and the exodus of thousands of citizens. In Columbia, decades-old armed conflicts compel more than 750,000 citizens to seek refuge from violence and reprisals in other countries. In Venezuela, Hugo Chavez, who assumes the presidency in 1999, adopts radical measures that cause many citizens to leave. 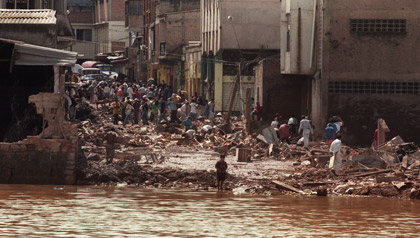 Hurricane Mitch's devastation of Guatemala, Honduras and Nicaragua causes thousands of Central Americans to take refuge in the United States. Many of them acquire Temporary Protection Status, which allows them to live and work here legally.